Honda has admitted that a misinterpretation of MotoGP rules was the reason Marc Marquez pitted too late during Sunday's Australian Grand Prix, a mistake that led to his disqualification.

Championship leader Marquez was black-flagged after completing 11 laps before making his mandatory mid-race bike switch, a rule enforced by race direction after over the durability of Bridgestone's rear tyre at Phillip Island.

The race had been shortened from 27 laps to 19, and the change of bikes - obligated in a dry race for the first time in the championship's history - had to be completed on lap nine or 10.

Honda believed he would be able to start the 11th lap because he would not technically have completed it when he came into the pits, but Marquez - whose championship lead has been slashed to 18 points after title rival Jorge Lorenzo's victory - admits they got it wrong.

"It was our first experience of a flag-to-flag race, and suffice to say it wasn't a good one," he said. "My team and I had set out a strategy and we thought that we could come in after lap 10, but in reality this counts as an extra lap.

"We hadn't had that in mind and this was a huge mistake. We had everything well planned and I followed the instructions on my pit board.

"You learn from these things though, so now we have to move on and focus on the race in Japan." 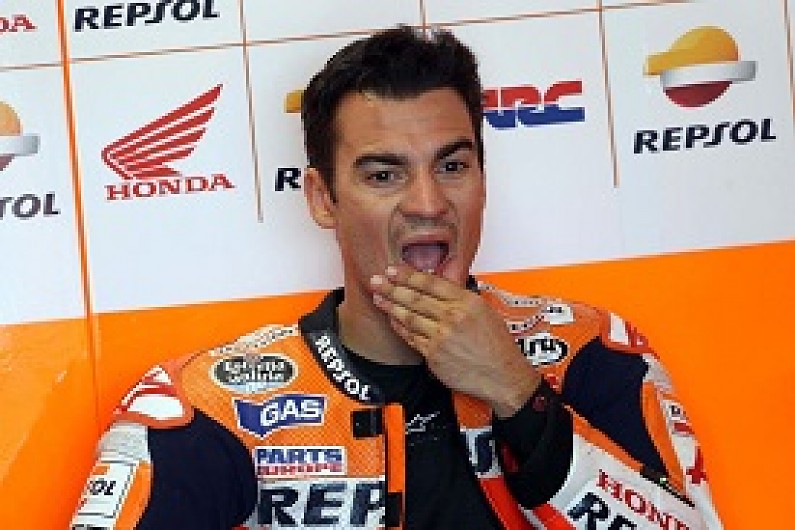 The speed limit zones had been extended on both entry and exit to ease safety fears, and Pedrosa (pictured right) was ordered to drop a place for his infringement.

The Spaniard did so just before Marquez was black-flagged and so was able to continue to take second, but admitted it had been a confusing race.

"The rules were being changed every five minutes," said Pedrosa. "Everything was turned on its head and it was very difficult to adapt first time, without making any mistakes.

"Marc made mistakes and I did too. Everything was going so fast and it was confusing for both the riders and the mechanics.

"We had to be clear about which lap to enter the pits, as it wasn't obvious which was lap nine and which was lap 10, and the pitlane was much longer than normal. It was all so strange today."