These are extraordinary times. The safe little bubble that motorsport normally provides from the fear, catastrophe and economic hardship of a post 9/11 world has often been a haven you could confidently run to at weekends. But the 2011 MotoGP season ransacked that fantasy as the lines between sport and the real world too often blurred unrecognisably.

First there was the devastating earthquake and tsunami that hit north-east Japan on March 11 that could not have failed to have affected a paddock made up of two-thirds Japanese machinery. Then there were the dwindling grids (just 14 bikes started at Phillip Island) and financial hardships that nourished the season-long wrangling between the manufacturers, the FIM and the sport's rights holder Dorna and made all the more necessary the introduction of the Claiming Rule Teams regulations (more of which later) and 1000cc engines that will change the sport in 2012.

Finally there was the jolting and horribly visual reminder that MotoGP can be a fatal endeavour when poor Marco Simoncelli was killed live, in front of millions of television viewers, on lap two of the Malaysian Grand Prix.

Despite the heightened social-media awareness of the age, the public reaction to the Italian's death was extraordinary over the weeks that followed. It was testament to his growing legacy as a cult hero, his burgeoning talent and the underlying awareness of the sport that Simoncelli will be immortalised in the minds of a generation in a way no other rider of the era - save perhaps Valentino Rossi - ever could be.

That Simoncelli had not yet managed to win a grand prix, and had secured but two top-flight podium finishes to his name, only emphasised those facts further.

Simoncelli's popularity, and the enormous outpouring of grief that followed his death, should have been a lesson to the key manufacturers Honda, Yamaha and Ducati. In a period of the sport's history during which the racing has been stymied by technological advance, the Italian's buccaneering, aggressive style provided the fans with a real personality to latch on to. Here was a racer, visibly charging; a natural rebel from 'everyman' roots. That Simoncelli ruffled the feathers of the establishment had only made them love him more - and here was the key: the fans associated with him and his on-track adventures, not the Gresini Honda he was riding.

As the season continued, so the amount of #58 flags in the crowd grew. Surely buying into this enthusiasm for personalities and on-track spectacle (and MotoGP has not normally been short of either) and providing a proper, uncomplicated platform for them to race openly on would sell more bikes than any highly-developed anti-wheelie device ever could.

Simoncelli's was not the only serious accident this season. Loris Capirossi retired from the sport a nearly broken man after an uncompetitive year on the Pramac Ducati and a massive crash at Assen that left him with upper-body injuries that took months to overcome. Dani Pedrosa, Alvaro Bautista, Colin Edwards (for the first time in his MotoGP career) and Jorge Lorenzo were among others to miss races through injury.

Some of the many accidents - which played a significant part in decimating grid numbers - including Capirossi's, were triggered by cold Bridgestone tyre-grip problems. The Japanese company to its credit reacted to this by providing more soft compound fronts for riders to use through practice after Assen, and then took a pragmatic approach to providing more pliable rubber thereafter. But more will need to be done by the control-tyre supplier in 2012 if riders are to be satisfied the issue is resolved.

It was the last year of the 800cc era, a period dominated by the onset of electronic rider aids. The aforementioned anti-wheelie device was just one such gizmo, but there was also traction control and more recently, seamless-shift gearboxes.

The very nature of the 800cc bikes meant that riders carried more speed through corners than they had previously on the big-banging 1000c four-strokes. And this, combined with the gizmos (which no manufacturer can really be blamed for pursuing the perfection of) had an overall sanitising affect on the racing through the five-year period. There had been some classic encounters along the way, but fewer than under previous rules, and the races this year were more spread out and predictable than at any time under these regulations. The close-quarter racing, once MotoGP's proudest sell, had suffered greatly.

This pursuit of technological excellence came at a financial cost too, and in 2011 many of the satellite teams reached a point of no return as the lease of factory bikes, or indeed even off-the-shelf one-step-back technology, became utterly untenable.

Things had to change. Hence the announcement of the 2012 CRT rules back in 2010. These allow for prototype chassis to be married to production-based 1000cc engines - significantly slashing costs - which will race simultaneously alongside the normal, now 1000cc-sized, prototypes next year. But the real bombshell came in November when Dorna CEO Carmelo Ezpeleta defied the might of the manufacturers and publicly outlined fears and plans he had privately revealed way back during the San Marino Grand Prix in September.

As far as he was concerned, the factories had to change their views on spending and consider a radically different, more production-based future or face losing the sport altogether. "It's clear by now that the way the bikes are built doesn't work anymore," he said. "It's not suited to the world's economic situation. If we carry on this way, with the teams lacking the budget to have the bike leased, in 2013 we'll only have two Hondas on the grid!"

The logic was sound but surprising, and at the time of writing Honda, Yamaha and Ducati rather predictably didn't see it that way as they defended their justifications to the board for the significant development spend devoted to the evolution of the species. Almost certainly a middle ground will be found, but MotoGP has a chance to equalise the sport enough to make racing its KPI again, while at the same time making it affordable for all. If it comes at the expense of some manufacturer involvement, would that really be the end of the world?

Suzuki has already gone, though it claims it will return in 2014. Another poor season, which did improve as the year went on, plus Japan's dire financial position in the global economy meant the manufacturer that won titles with Barry Sheene, Kevin Schwantz and Kenny Roberts Jr will not be represented in the world championship next year for the first time since 1973.

It was perhaps fitting though that Honda, which had been the key force behind shifting the engine regulations to 800cc in the first place, finally got it right in 2011. The RC212V, while still not the easiest bike to ride, was the most powerful and, combined with its standard-setting seamless-shift technology, the fastest.

Signing Casey Stoner from Ducati also proved a masterstroke. After years of riding a Ducati with furious power delivery and totally untrustworthy front-end characteristics, the Australian revelled in riding the Honda, which at least he knew he could have faith in - even if it at times he claimed it was hard work. It was as if someone had switched the settings from hard to easy in the game menu, and the results were spectacular. Both he and HRC Honda dominated almost at will.

Stoner's second championship title also defined him far more than his first. It put into context his performances on the Ducati since winning his first championship in 2007 with the Italian marque - particularly in light of Valentino Rossi's annus horribilis with the squad - and it moved him into 'great' status as a two-time champion. It also allowed us to measure more accurately the pecking order of the 'alien' quartet (Stoner, Rossi, Jorge Lorenzo and Dani Pedrosa), so-called for their supposedly other-worldly speed in comparison with the rest of the field.

By the end of the season comparisons were even being made with Australia's legendary motorcycle racing hero Mick Doohan, much as Sebastian Vettel was being measured against history in Formula 1 for his back-to-back titles with Red Bull. It's too soon for all that though, it's only fair to say that right now in MotoGP, there is nobody better than Stoner. 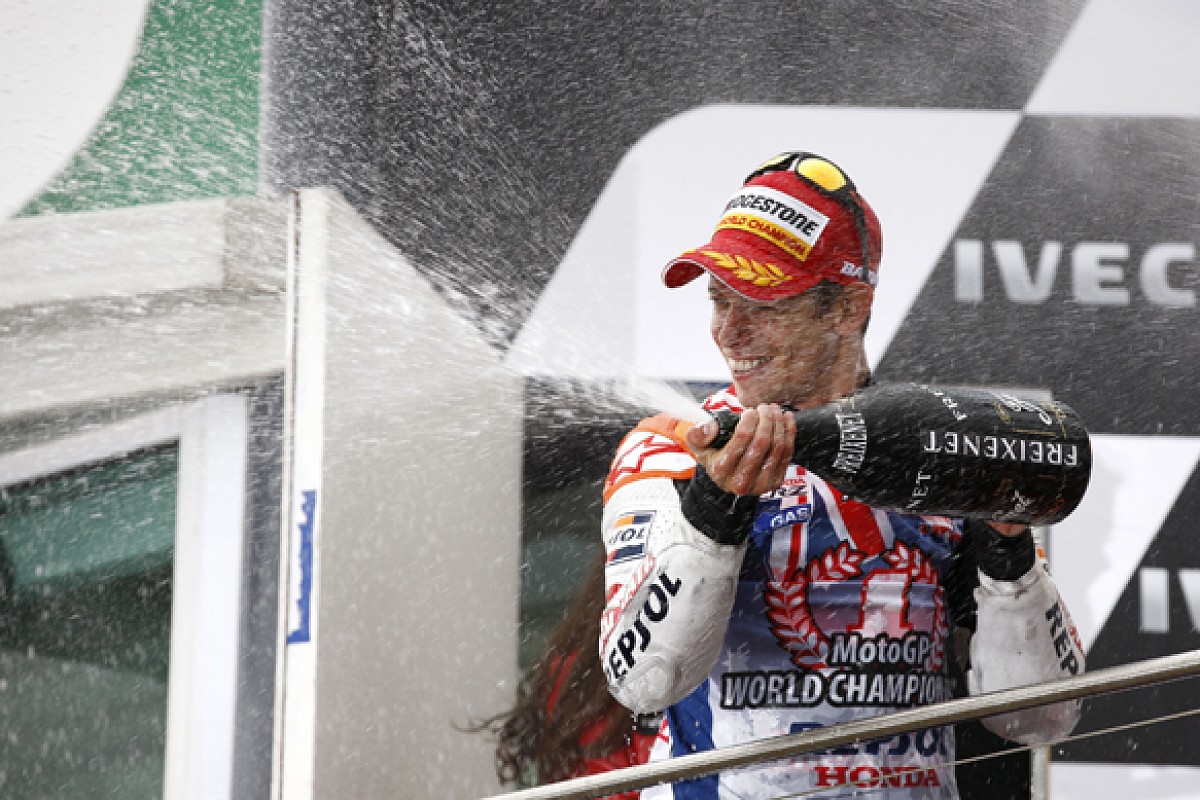