Acosta and Garcia were the class of the field in the tricky conditions and battled hard on the last lap, with Acosta prevailing to extend his championship lead to 53 points.

There was drama before race even begun, with poleman Deniz Oncu wheeled into pitlane as his Tech3 team elected to switch him to slick tyres just as the three-minute board was shown.

He was forced to start from the back and was one of seven riders to go for slicks on the wet-but-slowly-drying Red Bull Ring along with Petronas Sprinta duo Darryn Binder and John McPhee, Snipers Honda rider Andrea Migno and his stand-in team-mate David Salvador, and Honda Team Asia’s Andi Farid Izdihar.

Oncu’s penalty essentially gifted Garcia pole position, though it was Romano Fenati on the Max Racing Husqvarna who grabbed the holeshot from Garcia and championship leader Acosta.

Garcia guided his Aspar GasGas into the lead at Turn 9 at the end of the opening lap as the top three had already moved two seconds clear of the field.

Acosta followed Garcia through on Fenati at Turn 3 on the second tour before taking the lead at the same corner a lap later.

Garcia retaliated on the Ajo KTM rider at Turn 3 next time around, while Fenati quickly dropped off the lead battle – the top two over eight seconds clear by lap 12 of 23.

As the track continued to dry out, Acosta appeared to be biding his time behind Garcia, keeping his tyres cool on the damp patches. 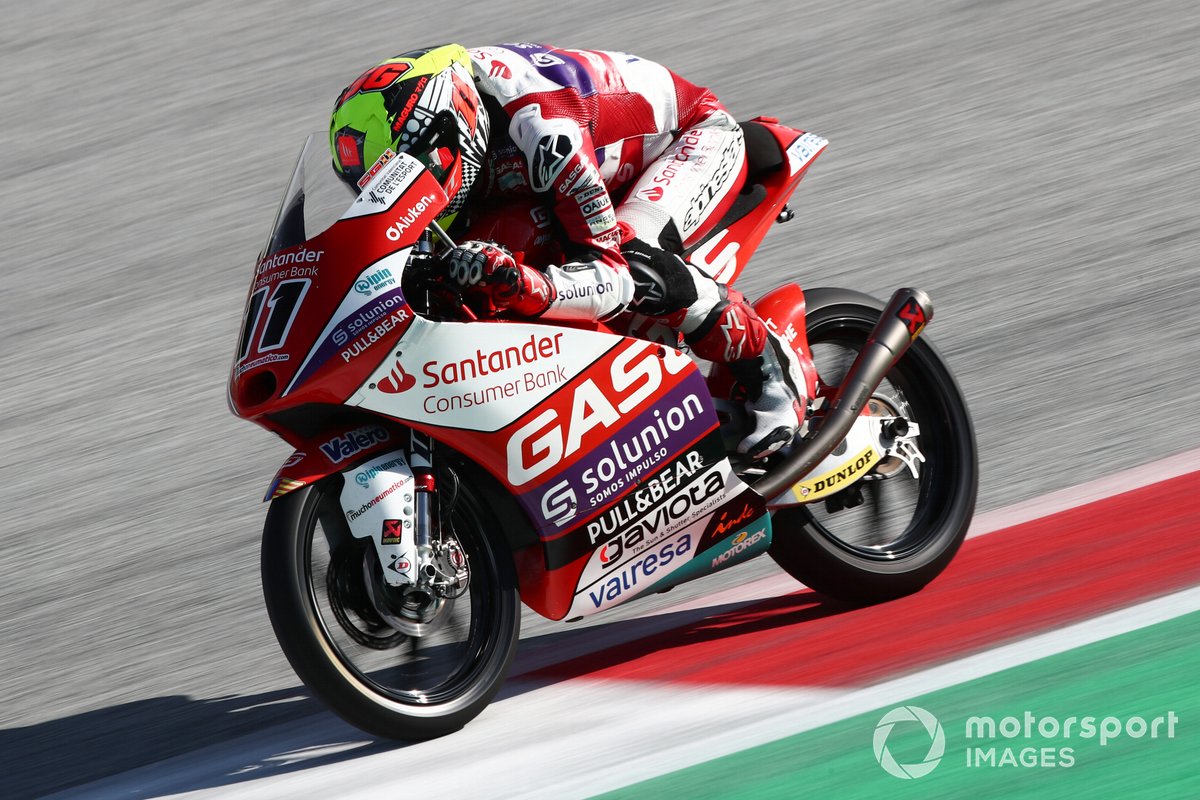 On lap 13 the 17-year-old made another moved for the lead at Turn 3 and immediately put three tenths between himself and Garcia.

But the Aspar rider nailed his run through the third sector and reclaimed the lead at Turn 9, once again countering an Acosta overtake at Turns 3 and 4 on lap 18.

Acosta once again tried to take the lead from Garcia at Turn 3 on the penultimate lap, but the latter got a better drive out of the corner and was back in the lead at the bottom of the hill at Turn 3.

Acosta made a daring lunge on the inside of Garcia into the Turn 6 left-hander but found no way through.

He made a move stick into Turn 1 on the final lap, but Garcia able to get into his slipstream up the hill to Turn 3 and launching an attack.

The pair collided, Garcia coming through as Acosta was forced to run off track at Turn 3.

Acosta lined up Garcia again for a move into Turn 9 and came up the inside, with Garcia crashing as the Ajo rider came through.

The latter had his own moment exiting Turn 9 and ran off track again, but took the chequered flag in first place for his fifth win of the season.

Such was Garcia’s advantage over the pack behind that he rejoined and still finished second, while Fenati snatched third from Ajo KTM’s Jaume Masia at the final corner.

Ayumu Sasaki completed the top five for Tech3 KTM ahead of Binder, who was the leading slick runner on his Honda – though he ended up 20.534s off the victory.

Oncu made little progress on slick tyres after being demoted to the back of the grid, the Turkish rider 1m12s off the win down in 21st.

AJ Foyt Racing team president Larry Foyt and newest hire Santino Ferrucci are both hoping the team can have a more consistent IndyCar season in 2023 after various struggles this year.

Stewart-Haas Racing will appeal the L2 penalty levied against them by NASCAR following the Cup race at Talladega Superspeedway.