There was drama before the race, as second-row starters Deniz Oncu (Tech3) and Darryn Binder (Petronas Sprinta) were handed pitlane starts for irresponsible riding in qualifying, with the pair joining Gresini’s Jeremy Alcoba and Binder’s team-mate John McPhee.

Poleman Andrea Migno grabbed the holeshot from Leopard Honda duo Xavi Artigas and Foggia, with rookie Artigas moving into the lead at the start of the next lap.

Foggia found his way to the front of the pack into Turn 1 on the fourth lap and resisted a brief attack from Doha race winner Acosta on the Ajo KTM on the fifth tour.

Artigas’ race came to an end at Turn 3 on lap four when Gresini’s Gabriel Rodrigo made contact with the Leopard Honda’s rear wheel, the Argentine hit with a long lap penalty for the incident.

Foggia absorbed pressure from the group behind led by Acosta up until lap 18, when the Ajo rider launched a raid on the outside on the run into Turn 1.

Acosta ran in too hot, however, allowing Migno to hit the front again ahead of Foggia.

Foggia did not allow Snipers Honda’s Migno to spend much time heading the pack, the Leopard rider scything through on the inside of the Portimao right-hander at Turn 11, with Acosta getting back into second two corners later. 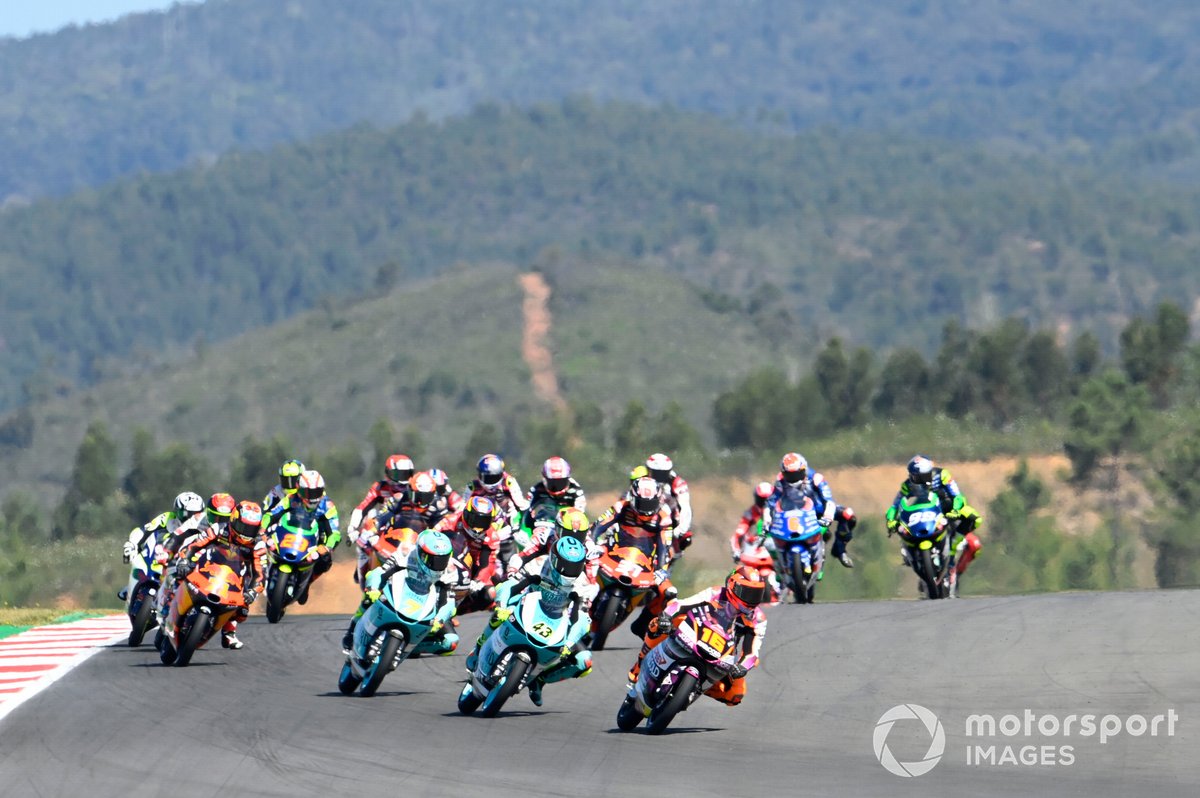 Acosta tried to pass Foggia again into Turn 1, this time on the inside, but the Leopard rider managed to fend him off under braking.

Foggia led the field across the line to start the final lap, with Acosta attempting a pass at Turn 3 but unable to break through.

Acosta found a way through on Foggia at Turn 13 and somehow stayed aboard his KTM despite a big wobble through the plunging final corner to beat Foggia by 0.051s.

Back-to-back victories for Acosta have put the 16-year-old rookie 31 points clear in the championship standings.

Migno held onto the final podium spot by 0.031s to claim his first rostrum since Valencia 2019, while Tech3’s Ayumu Sasaki and Rodrigo completed the top five.

Niccolo Antonelli got his Avintia KTM home in sixth ahead of Max Racing’s Romano Fenati, Garcia, Masia – who was able to rejoin after his crash – and Ryusei Yamanaka (Prustel GP).

Alcoba was able to recover to 14th from the pitlane, while both Binder and McPhee took the chequered flag without points in 20th and 23rd.