Ajo KTM rider Acosta came into the 16th round of the season with his first match point in the 2021 title having led Foggia by 30 points, but will go to Portugal only 21 points clear now after Foggia came from 14th to win the race.

Acosta had found himself back in seventh from fifth on the grid, while Foggia had dropped to 15th at the end of the opening lap.

At the front the sister BOE Owlride KTM of Stefano Nepa briefly took the lead from Antonelli into the fast Curvone right-hander – but the Avintia rider would return to the lead two tours later into the Quercia hairpin.

Foggia found himself cast adrift of the leading group of nine in the early stages by 1.6s, but once at the head of the second pack the Leopard rider quickly carved into those ahead of him.

By lap 10 Foggia was with the lead group, with Acosta moving into the podium places for the first time on the following tour.

After Antonelli nearly highsided exiting the Turn 6 left-hander on the next lap, Acosta capitalised to take the lead from the Avintia rider.

It was a short-lived stint at the head of the field for the Ajo KTM rider, as Guevara came through into the first corner at the start of lap 13 – before Acosta dropped to fourth when he ran wide at the Rio right-hander.

As a result, Foggia found himself staring at the rear of his title rival having worked his way up to fifth with some firm moves, and would take third from Acosta into Curvone moments later.

On lap 15 Foggia found himself leading for the first time, while Acosta – who was the only rider to run the harder rear tyre in the race – began to drop off the pace and slid down to sixth. 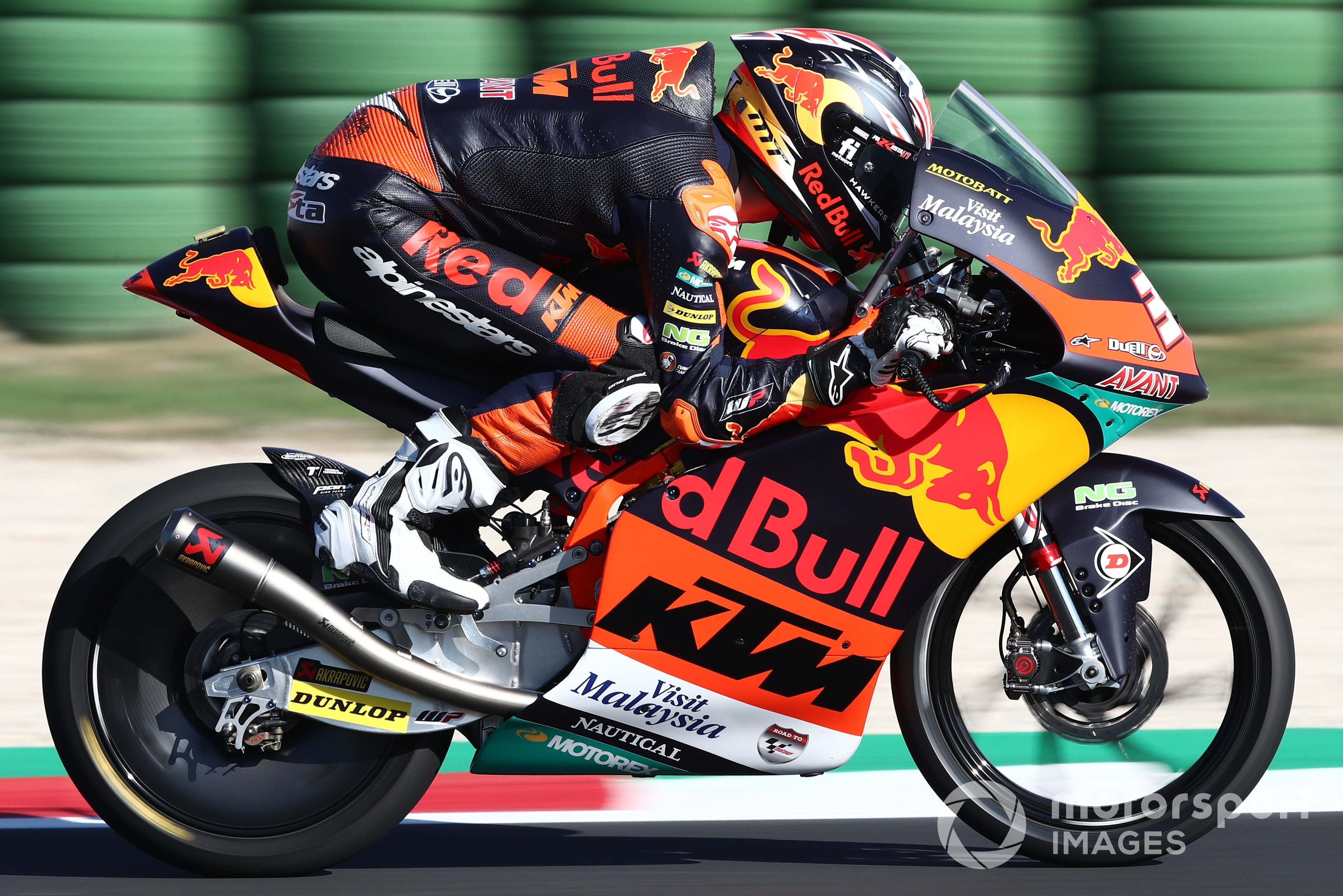 He was promoted a spot when Guevara crashed out of third at Quercia on lap 18, but Foggia, Masia and MotoGP-bound Darryn Binder had broken over a second clear of the rest of the pack.

Come the final laps, Foggia and Acosta’s team-mate Masia had streaked over two seconds clear of Binder, with the Ajo KTM rider in a position to take crucial points away from Foggia in the championship.

Foggia held the lead as the pair began the 23rd and final lap, with the Leopard rider covering off two key overtaking spots at Turn 1 and Turn 4.

The Leopard rider then shut down a move into Quercia as he nailed his run out of Turn 6 onto the back straight, and kept his crucial gap to claim an important win.

Acosta snatched third on the final lap from a struggling Binder to limit the damage to his championship lead, but his advantage now stands at 21 points with 50 left up for grabs in 2021.

Binder (Petronas Sprinat) was denied a podium by 0.111s, with Nepa shadowing him, while long-time leader Antonelli faded to sixth.

Romano Fenati was seventh on his Max Racing KTM ahead of Tech3’s Ayumu Sasaki, with the Leopard Honda of Xavi Artigas and Prustel GP’s Filip Salac completing the top 10.

A double podium for Ajo KTM has crowned the 2021 Moto3 teams’ champions.