Jorge Martin clinched the 2018 Moto3 title with a race to spare after breaking away from the pack at Sepang for a dominant seventh victory of the season.

This year's lightweight class title has largely been a two-horse race between Gresini Honda rider Martin and PrustelGP KTM man Marco Bezzecchi, with both riders having suffered numerous incidents over the course of 2018.

Two races ago, Bezzecchi narrowed Martin's lead to just one point by winning an ultra-close Motegi race as Bezzecchi crashed out.

But Bezzecchi being taken out of last weekend's Phillip Island race by Gabriel Rodrigo gave Martin a 12-point lead heading to Sepang and a chance of winning the title a race early.

That looked unlikely early on in the race as poleman Martin slumped to 10th in the opening few laps and Bezzecchi fought for the lead.

The complexion of the race changed around half-distance when Martin was able to surge back through the order and rejoin the fight for the top spot.

On lap 13 of 17, the Spanish rider took the lead as Bezzecchi went down to fourth, and from there he was able to sprint clear of his rivals and take a 3.5-second win.

Bezzecchi therefore had to finish no lower than fourth to take the title fight to the Valencia season finale in two weeks, and began the final lap holding second. 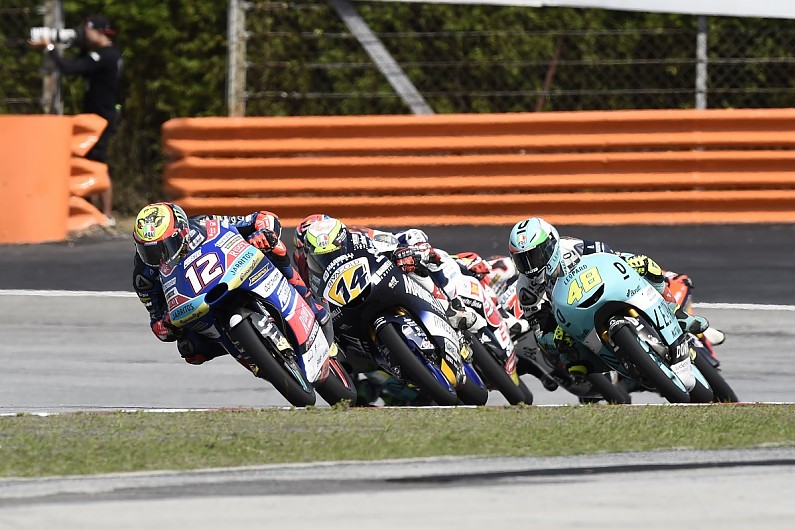 But on that last tour he was passed by Lorenzo Dalla Porta, Albert Arenas, Enea Bastianini and Martin's Gresini team-mate Fabio di Giannantonio.

He was only able to get one of those places back before the finish, at di Giannantonio's expense, giving Martin an unassailable lead of 26 points in the standings.

Martin will graduate to Moto2 next season with the Ajo KTM team, while Bezzecchi makes a similar move with Tech3.