Maverick Vinales took his first Moto3 win of the season at Jerez, taking the championship lead from Alex Rins, who crashed out of second place.

Vinales had taken the lead from Rins at Dry Sack on lap three, but the two were heading a four-bike lead group that included Luis Salom and Jonas Folger in the laps that followed.

Rins then suffered a high-speed crash at the Alex Criville bend at the back of the pits on lap 11, and after that Vinales and Salom made a break from Folger.

Salom was biding his time to make an attack for the lead, but he never got the chance when the race was red-flagged on lap 17 after Alan Tescher crashed and required medical attention.

The race result was then declared from lap 15. Although Tescher was unconscious at first, he was reported to be okay and speaking afterwards. He will be taken to a Jerez hospital for further checks. 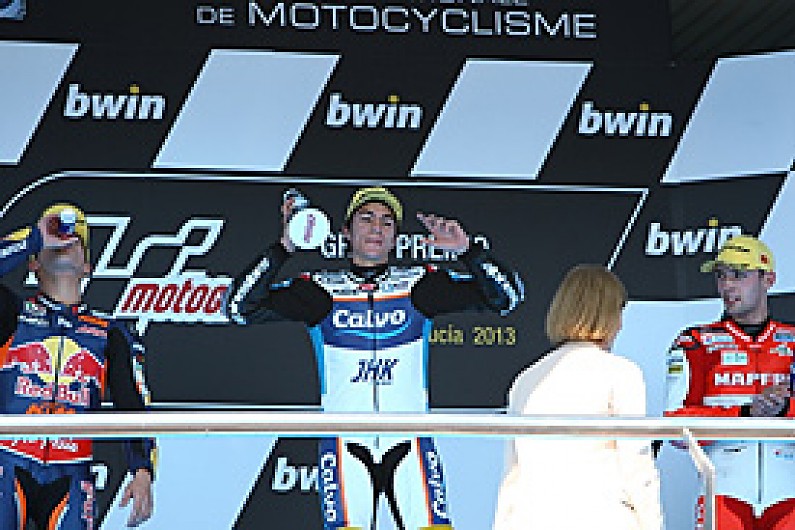 While Folger went on to take a lonely third place, Brad Binder emerged from a frantic battle behind the leaders to take fourth place.

Binder had been able to make his break when Jack Miller and Miguel Oliveira clashed at Turn 1 on lap 12 as the latter tried to pass Miller for fifth.

The battle for fifth then became a four-bike scrap between Jakub Kornfeil, Zulfahmi Khairuddin, Niklas Ajo and Efren Vazquez, with Kornfeil coming out on top.