Triumph to replace Honda as Moto2 engine supplier from 2019

Triumph will replace Honda as the supplier of Moto2's control engines from 2019, with a three-year deal having been announced

The British manufacturer's deal had long been expected, and was officially revealed during the Italian Grand Prix at Mugello.

It will develop a version of its three-cylinder 765cc engine from the road-going Triumph Street Triple, replacing Honda's four-cylinder CBR 600RR that has powered Moto2 since the class was launched in 2010.

Triumph's recent racing activity has been in Supersport-level competition, taking riders to Isle of Man TT and Daytona 200 victories and titles in the British championship in 2014 and '15.

It is expected to make appearances in the CEV Moto2 European Championship next year as part of its development programme.

"This is a significant moment for Triumph that brings an exciting new chapter to our 110-year racing history and builds on our celebrated TT and Supersport race winning triple engines," Triumph's chief commercial officer Paul Stroud said.

"We look forward to a long and thrilling relationship with [MotoGP promoter] Dorna and the Moto2 teams, riders and fans." 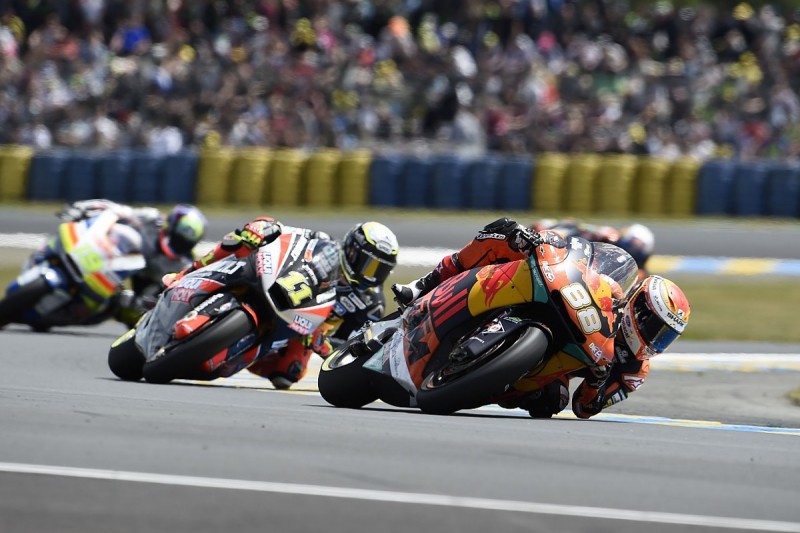 "We are very excited to be working with one of the world's most iconic motorcycle brands," Dorna CEO Carmelo Ezpeleta said.

"The Triumph triple engines are renowned for their strong, linear power and torque delivery and have achieved many successes on the track, making them the ideal choice for the Moto2 Championship.

"We are looking forward to the 2019 season and the beginning of a new generation of Moto2 in partnership with Triumph."

The final engine is expected to deliver 130PS (128bhp), paired with an ECU developed by the supplier of MotoGP's control unit Magneti Marelli.

In the works for six months so far, it has already been tested, including with experienced Moto2 racer Julian Simon last week at Aragon.

When introduced, the engines will be prepared and maintained by ExternPro along the same lines as Honda's current programme.

While testing has been carried out using a Triumph chassis, the manufacturer does not intend to join Kalex, KTM, Suter, Speed Up and Mistral as a chassis supplier.