Roberts topped practice overall with a record lap of 1m58.421s in FP2 on Friday, and came into Saturday's running as the favourite to end the USA's Moto2 decade-long pole drought.

A fast and furious opening to Q2 led to top spot changing hands in quick succession between Sky VR46's Marco Bezzecchi, Enea Bastianini on the Italtrans Kalex and Speed Up's Jorge Navarro - both of whom progressed from Q1.

Moments later, Marini guided his VR46 Kalex to a 1m58.136s to steal pole away from Navarro, though came under immediate threat from Roberts.

The American Racing Team rider fired in an identical lap to Marini's, but was given top spot due to his follow-up tour being slightly quicker than the Italian's. 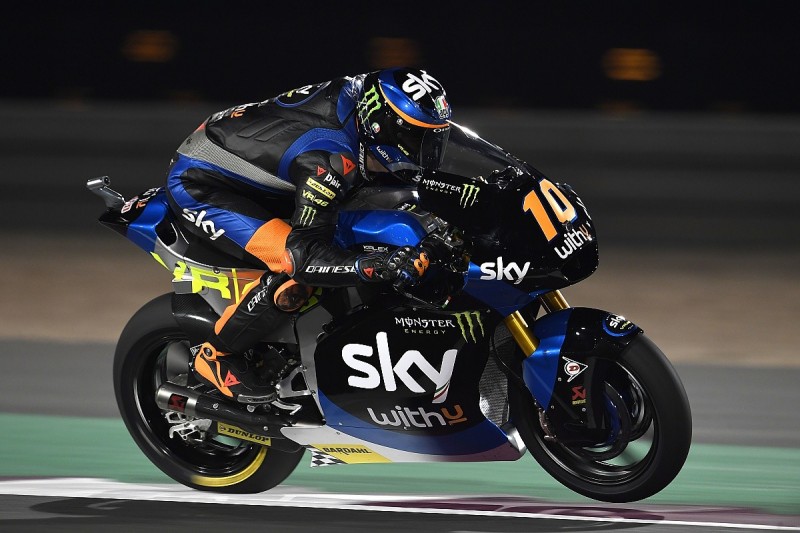 Though Petronas Sprinta's Xavi Vierge threatened to dislodge him at the start of his final lap, Roberts' time remained intact for him to secure his debut pole and the first for America in Moto2 since Kenny Noyes at Le Mans in 2010.

Bastianini leaped up to third late on to join Roberts and Marini on the front row, while Navarro headed Bendsneyder - who secured the best qualifying result for chassis manufacturer NTS in fifth - and SAG's Remy Gardner.

Bezzecchi was shuffled down to seventh in the end ahead of Ajo's Jorge Martin, last year's Qatar race winner Lorenzo Baldassarri (Pons) and Vierge.

After topping FP3 earlier on Saturday, Aspar rookie Aron Canet looked set to cause an upset in his first Moto2 qualifying session.

But last year's Moto3 runner-up could only muster 16th in the end, with the Spaniard reportedly suffering from an arm-pump issue.

Last of the 18 runners in Q2 was Tom Luthi, who failed to find any form on his Dynavolt Intact GP machine.

Somkiat Chantra was just 0.107s outside of progressing through to the pole shootout phase on the Honda Team Asia Kalex, with Petronas Sprinta's new signing Jake Dixon slotting in alongside in 20th.

Ex-Tech3 MotoGP rider Hafizh Syahrin's return to the Moto2 class on the Aspar Team-run Speed Up chassis has proven tricky so far.

He will start from a lowly 25th, while reigning Moto3 world champion Lorenzo Dalla Porta (Italtrans) is two spots further back as he too struggled to adapt to the intermediate class.