Alex Marquez has been linked with a switch to the Petronas SRT team in Moto2 for 2020, which could align with a move to the MotoGP team in '21.

Marquez scored his fifth victory of the season at Brno and leads the championship with a comfortable 33-point gap over former Marc VDS MotoGP rider Tom Luthi, who crashed out of the race.

He has raced for the title-winning Marc VDS outfit since joining Moto2 2015, scoring three wins and 13 podiums prior to this season.

Despite being linked to a Pramac Ducati MotoGP ride earlier this year, Marquez has clarified that he will stay in Moto2 next year.

His agent Emilio Alzamora has been negotiating with Marc VDS regarding a contract renewal, with the team having also expressed interest in keeping Marquez.

However, Marquez has received a last-minute offer from the Petronas Sprinta team, which currently runs a sole Kalex for Khairul Idham Pawi - who hasn't raced since Jerez due to injury - but is looking to expand to two bikes in 2020. 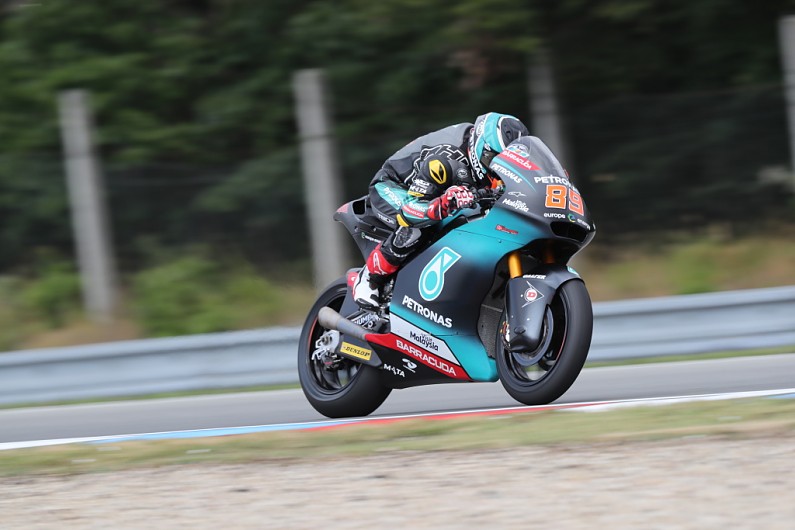 Marquez' switch to the Petronas-backed team could open up an opportunity to move to the Sepang team's MotoGP outfit, which is currently Yamaha's sole satellite team, in the future.

Such a move would come in spite of comments made by Yamaha factory team boss Lin Jarvis last August.

"To have a [Marquez] brother in Yamaha with MotoGP when the other brother is with our main rival [Honda] would be strange," Jarvis was quoted as saying when speculation swirled about the possibility of Marquez signing for Petronas Yamaha last year.

Marquez had been linked with a move to the Avintia team along with Moto2 rival Lorenzo Baldassarri, though the satellite Ducati squad announced last week it had retained the services of Tito Rabat for the next two seasons.

Rabat, along with Marquez, was also rumoured to be in talks with Kawasaki about a potential World Superbike switch in '20.