Next week marks the 30th anniversary of enigmatic French-Canadian Gilles Villeneuve's death in qualifying for the Belgian Grand Prix at Zolder.

Few drivers have sparked such debate as Villeneuve. Was he one of the most naturally gifted racers ever seen or was he over-rated and error-prone? Both schools of thought have done the rounds since that fateful Saturday afternoon in May 1982.

In a compelling and thought-provoking piece, Mark Hughes deconstructs many of the myths surrounding Villeneuve's natural speed and racing brain. He argues, quite convincingly, that the evidence does not support claims that he was a crasher and car-breaker. Given the right machinery, he could - and did - display the tactical acumen and mechanical sympathy required to be a world-beater.

Mark Hughes column - Our grand prix editor explains why Pirelli's fast-wearing rubber has made F1 2012 somewhat artificial, and how there's an easy solution.

WRC Argentina - The longest stage rally for 16 years brought renewed vigour to the sport, but a predictable outcome: a win for Citroen's Sebastien Loeb. David Evans reports from South America.

BTCC Thruxton - The tin-toppers splashed their way around the Hampshire speedbowl. Mat Jackson took the opener for Ford, before Honda's Gordon Shedden doubled up to reignite his title bid. Kevin Turner braved the rain.

DTM Hockenheim - The new-look series burst into life at its traditional season-opening home, with Audi and Mercedes joined by BMW after a 20-year absence. Merc stars Gary Paffett and Jamie Green staged a British one-two, watched by Jamie O'Leary. 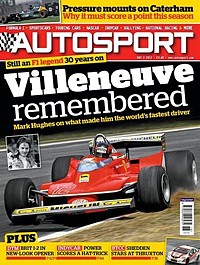 IndyCar Sao Paulo - The Brazilian city streets hosted the US single-seaters for a third time. Mark Glendenning saw Penske's Will Power make it three in row for 2012 and a hat-trick in Sao Paulo.

GP2 Sakhir - The second of back-to-back Bahrain weekends for the GP2 circus gave Davide Valsecchi his third win on the bounce for DAMS, while Tom Dillmann broke his series duck for Rapax in the reversed-grid event.

WTCC Slovakia - After six straight Chevrolet wins in 2012, the Cruze domination was finally ended by veteran Gabriele Tarquini in the Lukoil SEAT Leon. Briton Rob Huff then made amends for the blue camp with a race two win. Peter Mills reports from the Slovakia Ring.

F2 Algarve - It's four out of four for lanky Indo-Italian Essex boy Luciano Bacheta. Jack Nicholls reveals how he did it.

Formula Renault 3.5 preview - With help from Paul Wallace, Carlin engineer and brother of sportscar top name Andy, Glenn Freeman outlines the changes to the Dallara chassis for 2012 and picks out a few of the names to watch.

Sports Extra - Ahead of the British Formula 3 round on the magnificent Pau street circuit, series frontrunners Alex Lynn and Harry Tincknell will learn the track by tackling this weekend's historic meeting in Formula Ford and Formula Junior respectively.

From the archive - Recalling a young French-Canadian by the name of Gilles Villeneuve, who made a name for himself in Formula Atlantic during the mid-1970s.

Race of my life - Vincenzo Sospiri remembers the 1993 Pau GP - a round of the FIA F3000 International championship - in which he starred. He tells Peter Mills why it was the race of his life.