Justin Wilson took Dale Coyne Racing's first victory in 25 years of IndyCar and Champ Car competition, as the Briton fended off the might of the Penske and Ganassi teams to win at Watkins Glen 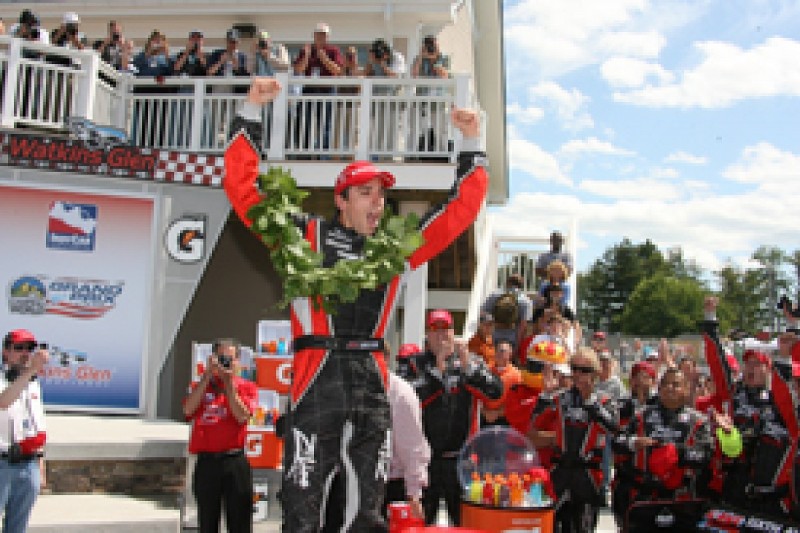 Polesitter Ryan Briscoe finished second for Penske ahead of Scott Dixon, who claimed the points lead after his Ganassi team-mate Dario Franchitti lost a lap with a mid-race spin.

Briscoe's team-mate Helio Castroneves made up for his poor qualifying performance by coming through to fourth ahead of Marco Andretti (Andretti Green), who recovered from a lap down after an early tangle, and impressive rookie Mike Conway (Dreyer & Reinbold).

Wilson attacked Briscoe as soon as the race got underway, swarming all over the back of the Penske Dallara for the first few laps before diving ahead into the Bus Stop on lap four and then pulling away.

Briscoe had a chance to retake the lead when Wilson was held up badly trying to lap Andretti, who had been forced to pit early with a puncture after being tagged by EJ Viso (HVM), but the Briton escaped a three-abreast moment into the Bus Stop and then squeezed past Andretti and maintained his lead.

Wilson then received a big boost at the first stops as debutant Richard Antinucci spun his 3G car and caused a yellow when Briscoe, Mario Moraes - who had run a strong third for KV early on - Dixon, Tony Kanaan (AGR) and Franchitti had yet to pit.

This quintet therefore fell outside the top ten as they had to pit under yellow, leaving Wilson to lead from the superb Conway, the out of sequence Graham Rahal (Newman/Haas/Lanigan), AGR's Hideki Mutoh and Castroneves.

The middle stages featured a rash of yellows and problems for several major contenders. Moraes' great weekend went awry when he clattered into Ed Carpenter's Vision car at the Bus Stop while trying to make up the ground lost in the pits, with pre-race championship leader Franchitti spinning into the gravel in avoidance and losing a lap.

Next to drop out was returnee Paul Tracy, who spun his KV Dallara into the barrier at Turn 7 while running 11th.

Between the cautions, Briscoe and Dixon clawed their way ever further up the top 10, and at the same time saved enough fuel to run several laps further than the leaders at the final stops.

The extra low-fuel laps were almost enough for Briscoe to leap right back into the lead, but Wilson - who had stopped two laps sooner - braved it out with him through the first two corners and clung on, with Dixon emerging third ahead of Castroneves, and Conway falling to fifth.

A late caution, caused by Mutoh crashing at Turn 7, raised the spectre of the St Petersburg race - where Wilson led until Briscoe jumped him at a late restart.

But this time Wilson made sure the Australian had no opportunity to get close, sprinting away from his pursuers with a perfect restart and leaving Briscoe to fend off title rival Dixon.

As this pair battled, Wilson simply left them standing, pulling away to take his small team's first ever victory by a comfortable 4.9s.

Briscoe beat Dixon across the line by just 0.2s, with Castroneves close behind.

Conway lost fifth in the final moments as Andretti completed an outstanding recovery drive by passing the rookie. Andretti had regained his lost lap in the first pitstops and yellow, then jumped up the order by staying out until lap 45 before his final stop.

Viso, who needed a new wing after hitting Andretti, also used great pit strategy to come back through to seventh, ahead of Kanaan, Newman/Haas/Lanigan's Robert Doornbos and Panther's Dan Wheldon, with Danica Patrick (AGR) falling back to 11th after her strong qualifying run and Rahal's alternative pit strategy leaving him a lowly 13th.