The high-attrition event featured nine cautions, many for crashes and incidents.

Having started in ninth place, Power hit the front for the first time after the opening caution for Alexander Rossi's early crash.

He continued to feature at the front of the pack through the pitstop phases and found himself in a close battle between five cars towards the end of the race.

With limited time and four damaged cars to clear - after Conor Daly and ex-Formula 1 driver Max Chilton got caught up in the aftermath - the race finished under caution.

Behind Power, it was Kanaan who rallied back from falling two laps down to claim the runner-up spot.

He survived several incidents but lost ground with a stop and hold penalty.

This was for blocking and causing an avoidable collision in a multi-car crash that took out several leading contenders and changed the course of the race.

James Hinchcliffe was drawing alongside Kanaan when he was squeezed and lost control, crashing into early leader Tristan Vautier - who then speared into Mikhail Aleshin.

Eight cars were involved in total, with Carlos Munoz, Ryan Hunter-Reay, Ed Jones and JR Hildebrand getting caught up too. Ed Carpenter also suffered damage but did later reappear. 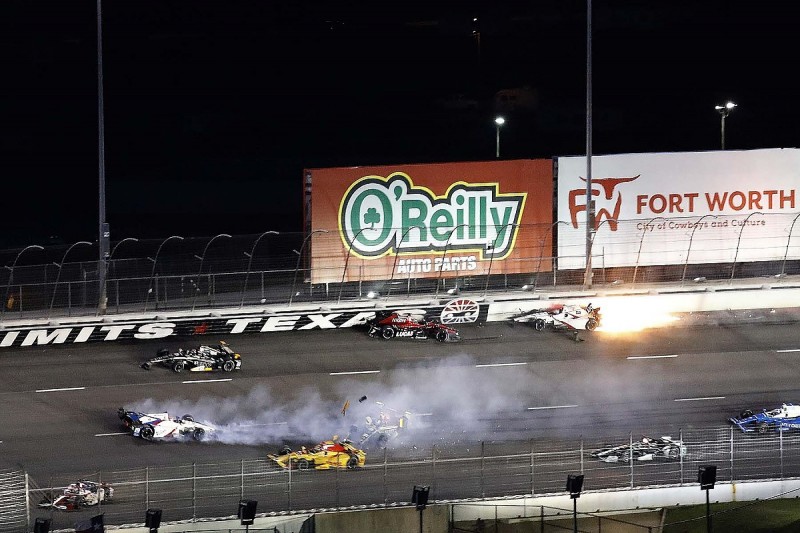 The race was red flagged for just over 30 minutes while the cars were cleared, with Kanaan two laps down at the time, but the following cautions - two of which were competition yellows - allowed him back onto the lead lap.

Quick progress on the late restart and the Sato/Dixon collision elevated him to second, with Simon Pagenaud emerging from the incident-filled race in third place.

Last year's Texas winner Graham Rahal was fourth, with Gabby Chaves and Marco Andretti - who recovered from being lapped - the only other drivers on the lead lap.

Penske's Josef Newgarden could have been in contention for victory after bouncing back from an earlier drive-through penalty, but he tried to go three-wide late on and crashed out.

Alongside Rossi, Helio Castroneves was another driver to find the wall early on the race, suffering a flat right-front tyre at Turn 2 just after he had moved into third place.

Early leader and polesitter Charlie Kimball retired in the opening pitstop phase, during the caution after Rossi's crash, due to an oil leak.