The Penske driver crossed the line 1.1 seconds ahead of Justin Wilson.

But most talk afterwards was of the pitlane collision between Scott Dixon and three members of Power's pit crew that resulted in a penalty for the New Zealander, relegating him to 15th on an afternoon that he'd otherwise controlled.

The incident happened when Dixon was exiting his pit box and clipped a tyre being carried by Power's right-rear tyre changer, skittling he and two other crew members.

None were hurt, and there were wildly differing opinions regarding whether Dixon had any opportunity to avoid the Penske personnel. But race control decided against the Ganassi driver, summoning him in for a penalty that initially dropped him to 21st.

Up to that point Dixon had been the dominant driver of the afternoon, and his exit proved to be a boon for his two closest title rivals in Helio Castroneves and Ryan Hunter-Reay.

Both men had stood to lose a huge pile of points to the Kiwi, and instead came out of the weekend having extended their advantage.

Power kept himself in the hunt with the help of some aggressive restarts - one perhaps too aggressive in the view of Dario Franchitti - but Wilson took a very different route to second place.

The Brit had gone against the grain by starting on the black tyres, and then had his pit strategy thrown into disarray when he was turned around early on and stopped out of sequence.

But the combination of late-race cautions, a good car from Dale Coyne Racing and, during a couple of key points, better tyres than the guys around him allowed him to work himself back into contention. 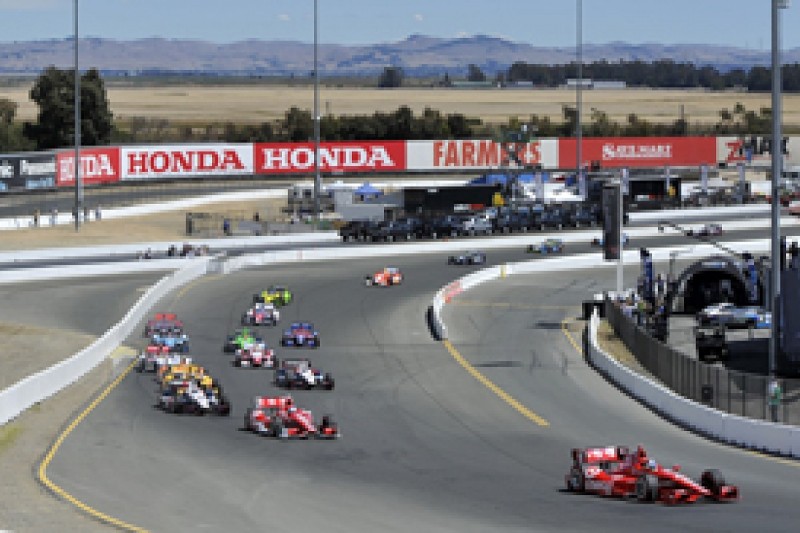 It was a more frustrating afternoon for Franchitti, who had led early on but then made a mistake and conceded a spot to Dixon.

The Scot admitted later that he would have fought harder had it been anyone other than his team-mate trying to pass him.

Later, he was forced onto the grass by Power on a restart, a move that he felt should have earned the Australian a penalty.

A Sonoma record of seven cautions punctuated the afternoon, although Sebastian Saavedra was the only driver to exit the race as the result of contact. The Colombian hit the barrier at Turn 9 after being tagged by James Davison.