Scott Dixon emerged victorious from a bizarre Sonoma IndyCar race, while Will Power recovered from a mishap to salvage 10th and maintain the points lead into next weekend's Fontana finale

On an afternoon riddled with incidents and intrigue, Dixon moved into the lead for the first time just three laps from the end as Mike Conway, who was one of several drivers on alternate strategies, began to struggle on fuel mileage.

"There were so many strategies going on and they were just slightly off, and I didn't know who could make it and who couldn't," said Ganassi driver Dixon. "We've have a pretty rats year this year and I'm so happy to end on this note."

The extent of Conway's plight became apparent as he ran dry midway through the final corner and rolled across the finish line, dropping from a podium place back to 14th. He stopped just yards over the line, bringing out a local yellow that would have ramifications of its own a few moments later.

Conway's misfortune came after the Brit, making his final appearance of the year with Ed Carpenter Racing, dominated the middle phase of the race, and paved the way for Ryan Hunter-Reay and Simon Pagenaud to complete the podium.

The real story of the afternoon was the sheer depths of catastrophe that the main title contenders at Penske managed to dig themselves into.

The day started with the team being evacuated from its hotel following the earthquake that struck the area in the middle of the night, and for Helio Castroneves, it never got better - he was involved in a multi-car incident on lap one (pictured) that dropped him to the back, and another spin in traffic later on, leaving him 18th. 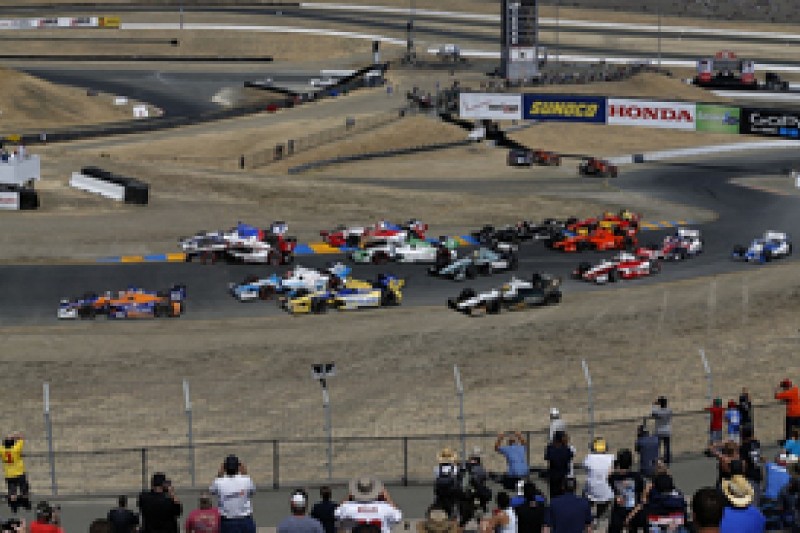 For the first half of the afternoon this was playing right into the hand of team-mate and championship rival Power, who was untouchable during the opening two stints and led by as much as 11 seconds. That ended when he changed to a set of new black tyres and spun at the hairpin, dropping himself back to 20th.

After a long and unhappy stint on a ruined set of tyres he made a solid recovery in the latter stages of the race, and attempted to finish things off with a three-wide move through the hairpin on the final lap to jump from 12th to ninth.

Miraculously he made it stick (although Sebastien Bourdais, who was to the outside, ended up hitting the wall). However he also did it right by the local yellow that was being waved for Conway's stranded car, and was consequently dropped back to 10th behind Justin Wilson after the race. He goes into Fontana with a 51-point lead over Castroneves.

Also worthy of mention was Graham Rahal, who was on yet another of the myriad strategies and found himself comfortably leading in the latter stages of the race.

His fuel load demanded a yellow for him to be able to make the chequered flag though, and when it failed to materialise he was forced to pit with just a handful of laps remaining. A drive-through for pitlane speeding sealed his 20th place.