Mikhail Aleshin's breakthrough IndyCar pole at Pocono on Saturday followed a maiden win being lost in the previous round at Mid-Ohio, and underlined the Russian's rise in America

The Schmidt Peterson driver had been on course for Mid-Ohio victory before a pitlane collision with Josef Newgarden, his Pocono front row partner.

Aleshin was dejected after Mid-Ohio but topped first practice and qualifying at Pocono.

He had moments at Turn 1, where three drivers crashed in morning practice, on both qualifying laps but "just decided I was going to keep it flat."

The Russian joked about his stern-faced reaction to pole afterwards.

"It's obviously very difficult to explain what I feel now," he said.

"But it's a lot of emotions definitely. Maybe you cannot see it with my Russian face, but it's true."

After a long European single-seater career that included beating Daniel Ricciardo to the 2010 Formula Renault 3.5 title, Aleshin came to IndyCar with Schmidt in '14.

He showed promise but ended the year with shoulder, foot and internal injuries after a horrific practice crash at the Fontana season finale.

While sidelined, his sponsorship funds were frozen due to sanctions issued against Russia over its invasion of Ukraine.

Aleshin raced for SMP's LMP2 project in 2015, before returning to Schmidt for the last IndyCar round at Sonoma and finishing 10th.

With his sponsorship situation resolved, team owners Sam Schmidt and Gary Peterson brought Aleshin back into the fold full-time this year. 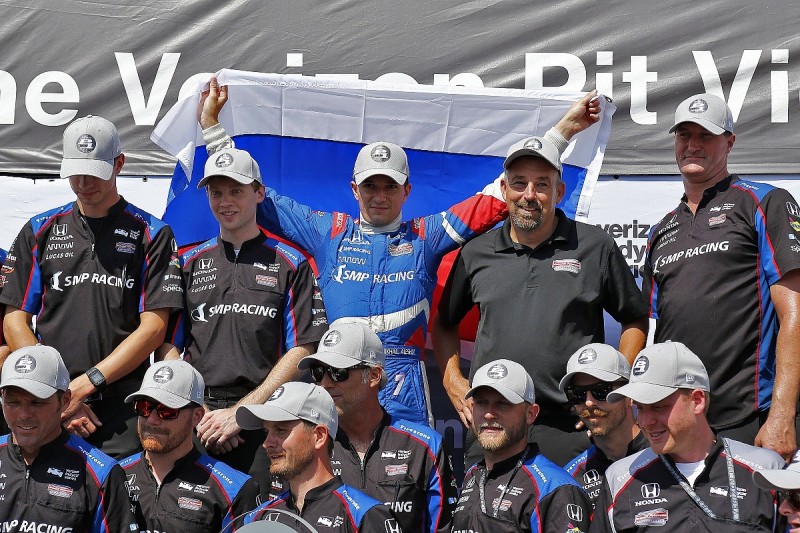 "We've been through some very difficult situations at the end of 2014. They supported me then," said Aleshin.

"We have some new team members this year and I wasn't in the championship last year.

"We needed to do some work together to understand better each other.

"Now we can see really good and effective progress in the last couple of races.

"I hope that this pole position is definitely not all what we can show to you."

Second-placed Newgarden said Aleshin's practice pace had showed "it was going to be tough for us to get them" and that the Russian was a "super legitimate" contender now.

"I think it starts with his team. He's with a great group," said Newgarden, who won his 2011 Indy Lights title with Schmidt.

"There's not a lot that spooks him, which can be unnerving when you think about it.

"He gets better and better the more seat time he has."

Despite his European background, Aleshin has also become very much at home on ovals.

"I just love it," he said. "Some of my colleagues from Europe that came over here and tried IndyCar told me that I going to hate the ovals because it's just a completely different idea compared to what you normally do in Europe.

"Actually I loved it straight away. It's just so interesting. It's very intense racing. You need to think like two times faster than on normal tracks.