Pocono IndyCar: Penske's Will Power recovers from lap down to win

Will Power led a Penske one-two in the Pocono IndyCar race, after a late strategy gamble allowed him to turn around his fortunes

A front wing problem had forced Power to pit out of sequence and go a lap down in the opening stages.

His trouble were further compounded by rear wing damage, which he sustained in contact with Charlie Kimball.

Also in the lead battle was Josef Newgarden, who made his way up from 14th on the grid, and Ryan Hunter-Reay who came back into the top five from 21st after suffering a crash in qualifying that nearly ruled him out of the race.

A yellow for a big crash between James Hinchcliffe and JR Hildebrand midway through the race at Turn 1 gave Penske chance to pit Power to have his rear wing damage fixed and get back onto the lead lap. 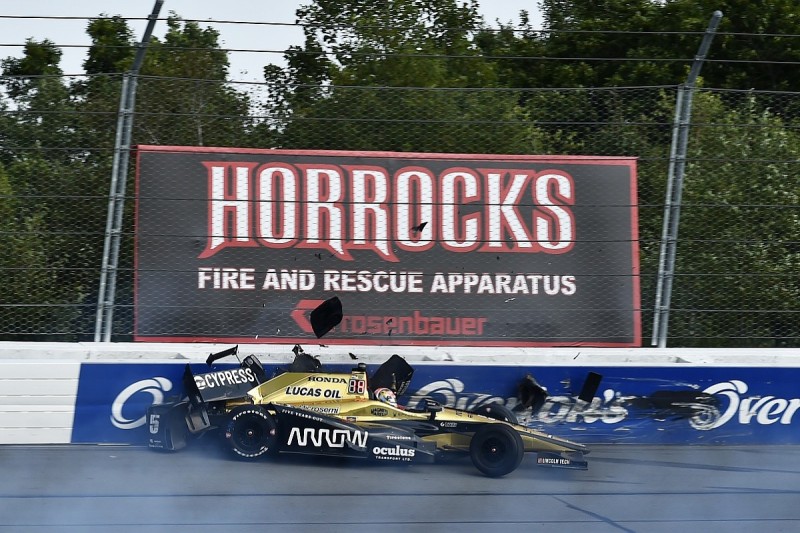 At the restart Power worked his way up to ninth, which put him in clean air as the leaders made their penultimate pitstops.

Penske elected to keep Power out for a few more laps, which he used to put in the fastest lap of the race. When he emerged from the pits, that netted him a 4.5-second lead heading into the final stint.

Dixon, Hunter-Reay and Kanaan gave chase, with Dixon first of the leaders to make a final pitstop with 20 laps to go.

Penske instantly reacted by bringing Power in on the next lap, allowing him to emerge as the effective leader.

Dixon meanwhile lost ground to Newgarden and Alexander Rossi as they pitted a few laps later, then needed to save fuel with a handful of laps left.

That set up a close finish between Power, Newgarden, and Rossi, with the Penske team-mates going wheel-to-wheel on occasion.

Power was just able to hold on and take Penske's 196th IndyCar win by half a second.

Reigning champion Simon Pagenaud was not able to challenge the leaders for most of race, with Kanaan in fifth ahead of Dixon.

Graham Rahal and Carlos Munoz rounded out the top 10.

Polesitter Takuma Sato ended the race only 13th, having suffered with balance issues that caused him to drop back early on.