A podium finish for Lundgaard at last week’s race on the Indianapolis Motor Speedway road course appears to have unlocked his confidence and as he lapped the bumpy 2.1-mile street track in Nashville he put in a 1m15.9695s to head the field by over two-tenths over Felix Rosenqvist.

With an extra set of primaries to use, it was predominantly the rookies who hit the 2.1-mile course in the opening 15 minutes, with David Malukas of Dale Coyne Racing with HMD setting a 1min18.1595s, just ahead of Andretti Autosport’s Devlin De Francesco, and Rookie of the Year points leader Lundgaard.

Then Josef Newgarden was first of the 2022 race winners to show his hand, with a 1min18.0728s for Team Penske.

Meyer Shank Racing’s Helio Castroneves, who is set to suffer a six-place grid penalty on Sunday, then suffered misfire in his new Honda and had to pit.

At this time Newgarden started to stretch his advantage with a 1min17.3855s lap, with Romain Grosjean slotting into second 0.61s in arrears.

A red flag was called after Dalton Kellett slid into the Turn 1 run-off, and not having enough room to spin back around.

Scott McLaughlin just had time to slot into second – still half a second off Newgarden – before Rinus VeeKay had a similar issue in Turn 1 and the newly re-signed Ed Carpenter Racing driver needed rescuing.

Following the green flag, Pato O’Ward of Arrow McLaren SP, and Penske’s championship leader Will Power moved up to second and third, 0.045s and 0.26s respectively off Newgarden’s benchmark. 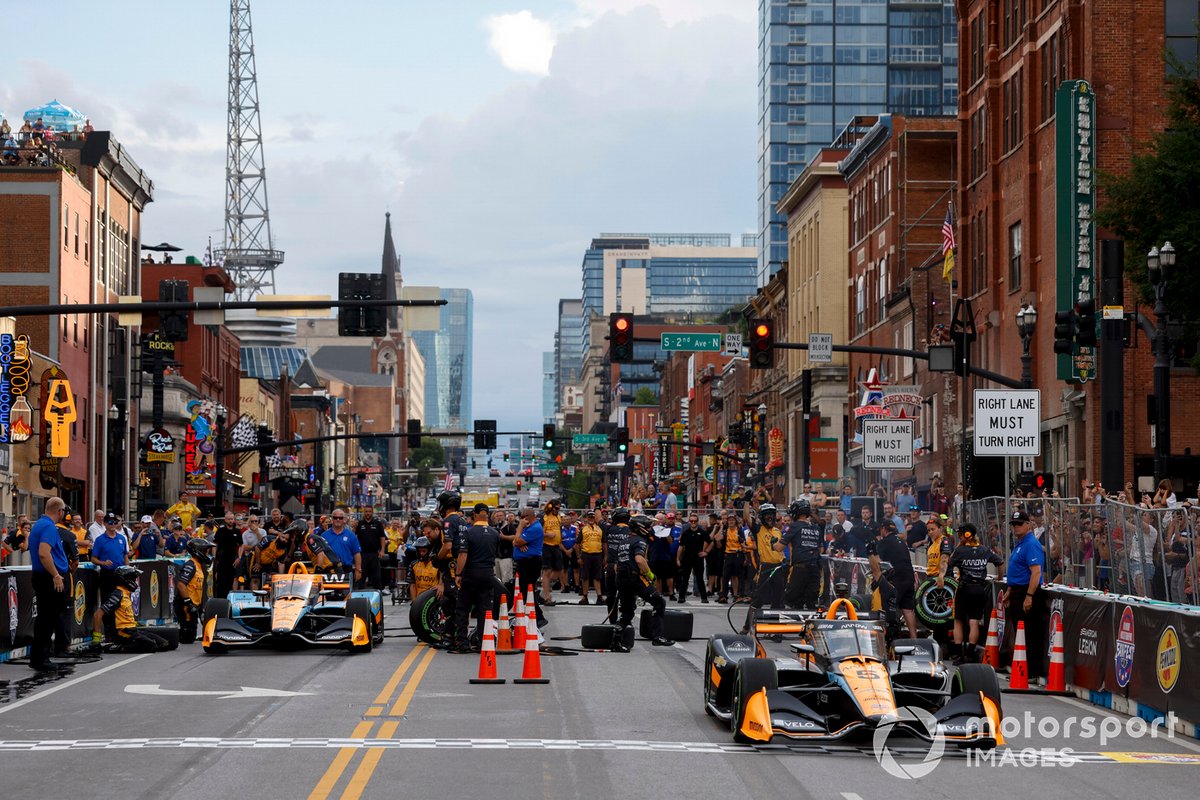 Then Newgarden shaved his best time down to a 1min17.2591s, and last year’s Nashville runner-up Scott Dixon moved into third, 0.19s behind.

Castroneves, whose engine issue had been resolved, bent a toelink against a wall under braking and had to limp back to the pits with 30 minutes of the session remaining.

McLaughlin then moved the game on with a 1min16.8441s effort on primaries, 0.415s clear of team-mate Newgarden.

After the third red flag flew for Herta who stalled in the Turn 1 runoff, complaining of clutch issues, the session restarted with just under 20 minutes remaining.

Several drivers took on a set of the alternate Firestone tyres – green side-walled this weekend, since the sidewall rubber is made from the guayule shrub.

Rosenqvist then used the ‘greens’ to deliver a 1min16.2050s lap, but no less impressive was rookie Lundgaard who went fourth fastest, 0.79s behind, but using the hard primary tyres.

Then with the alternate tyres on, Lundgaard delivered a brilliant 1min15.9659s to go top, 0.24s clear of Rosenqvist, while his main rookie rival Malukas claimed third.

Alexander Rossi spent much of the session stuck in the pits, having his brakes bled, but when he emerged he took alternates to take sixth place late on behind McLaughlin and Newgarden.

With Power in seventh, Herta held on to eighth ahead of Palou as Andretti’s Grosjean rounded out the top 10 in opening practice.