Herta advanced from his Q1 group on primary tyres, which meant the Andretti Autosport driver had a set of fresh red soft tyres for the final segment of qualifying, and he duly delivered a scintillating 1m13.6835s with his third lap to grab pole position in the top six pole shootout.

Alexander Rossi was second fastest of the Andretti Autosport drivers in fourth place and ahead of the fastest Chevrolet driver, Arrow McLaren SP’s Felix Rosenqvist, while Romain Grosjean landed sixth for Dale Coyne Racing with RWR.

But with IndyCar points leader Palou picking up a six-place grid drop for an unapproved engine change, the Spanish driver will start the Nashville race down in ninth place.

In Q2, Simon Pagenaud was the only driver to take used soft tyres from the start of the session, and he briefly held top spot but was eventually eclipsed before all drivers ducked into the pits for fresh softs.

Grosjean threw down a marker on his fourth lap in Q2 with a 1m15.0078s ahead of Palou and Herta, but was then bumped off top spot by the championship leader, and demoted further by Rosenqvist. 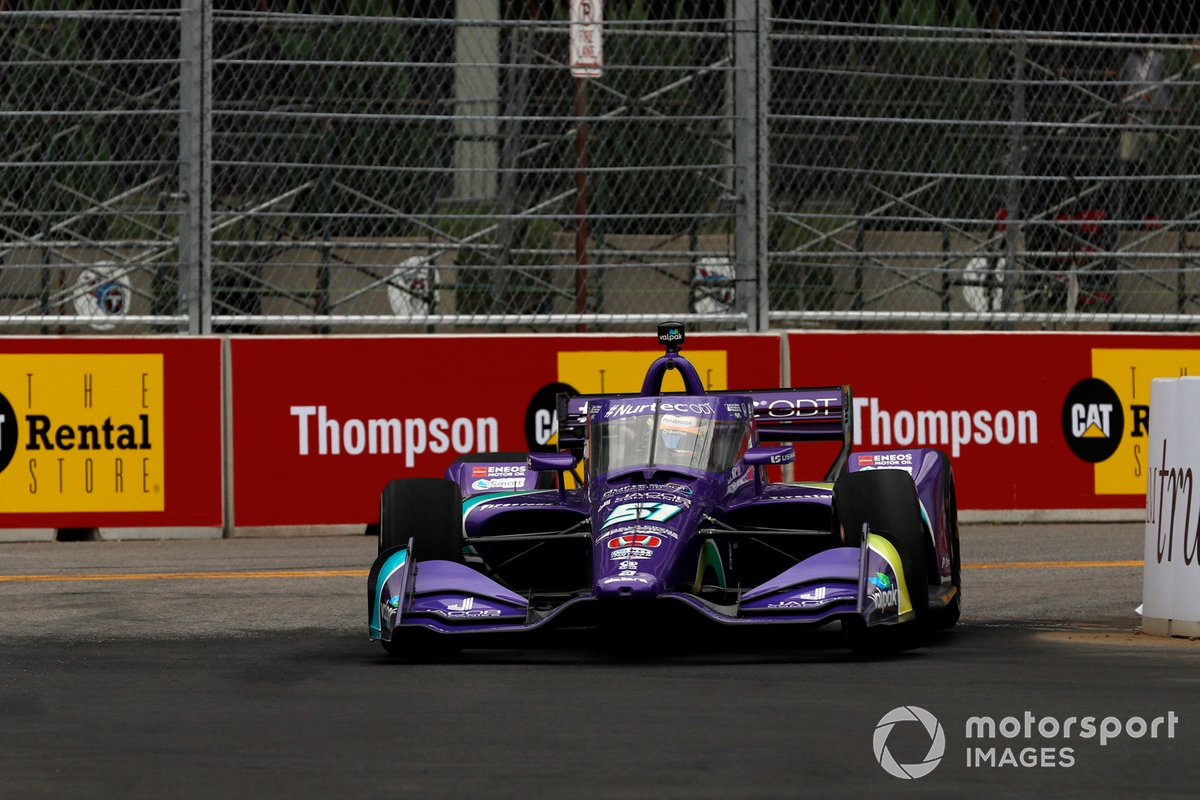 Josef Newgarden, who lay sixth at the time, was attempting to set another flyer when he locked up into Turn 10 and smacked the wall hard with his right-front and the right-rear. The resulting debris spread on to the track was considered interference with the close-following O’Ward, so Newgarden had his fastest lap deleted, dropping him to 12th, alongside team-mate Will Power.

That didn’t help O’Ward who wound up ninth, while Jack Harvey’s Meyer Shank Racing missed the Fast Six by 0.12s but will start sixth - up one spot due to Palou's penalty.

Earlier in Q1's second group, Grosjean had a little spin in the Turn 10 run-off but was able to resume with a spin-turn.

Herta continued the form he’s shown in practice, and on primaries he delivered a 1m14.7067s – at that point a full second ahead of the opposition on primary tyres, and the first lap in the 101mph bracket.

Dixon eventually shaded that with a 1m14.6673s but needed a set of alternate compound tyres to do it. Harvey delivered third-fastest time for Meyer Shank Racing ahead of the impressive James Hinchcliffe, ahead of Pagenaud’s Penske and Grosjean in the Dale Coyne Racing with RWR-Honda.

Ryan Hunter-Reay failed to advance, his cause not helped by being issued a drive-through penalty for speeding on pitlane, while Rinus VeeKay was kicking himself for tapping the wall with his Ed Carpenter Racing car, bending the rear suspension and leaving him starting behind team-mate Conor Daly, but ahead of Takuma Sato.

In Q1's first group, Jimmie Johnson drove his Chip Ganassi Racing into the wall at Turn 10 on his out-lap, which caused a red flag and meant the qualifying segment only got going with 3m30s remaining, forcing all the remaining drivers on to the soft tyres with no sighting laps. Johnson’s team-mate Palou landed top spot with a 1m15.3385s, a few hundredths ahead of Andretti Autosport’s Rossi and the Arrow McLaren SP of O’Ward.

Scott McLaughlin, who suffered an incident this morning, was eliminated after brushing the wall with his right-front wheel, as were the Rahal Letterman Lanigan Racing cars of Graham Rahal and Santino Ferrucci, and Meyer Shank Racing’s Helio Castroneves, who is making his first IndyCar road/street course start of the year.