The combination of caution periods and a topsy-turvy grid set the race up as a pit strategy duel right from the start, but the day first began to swing in Bourdais' favour when his team elected to keep him out when almost everyone else in the field pitted during the first caution just before the halfway mark.

At that point Bourdais was on tyres that were only 10 laps old, and as soon as the field was released back into green flag conditions, the Frenchman made the most of the clean air to vanish up the road: 20 laps and a couple of cautions later he had a 17-second lead.

He rejoined 11th after his second-to-last stop, but had such a speed advantage on new rubber that he had worked his way back into the lead again just 17 laps later.

By the end of that stint he'd lapped the entire field and while many of his rivals got their lap back when Bourdais made his final stop, the damage was already done.

Bourdais rejoined in the lead, and survived the last couple of restarts to take his first oval win in nine years.

"It was unbelievable," he said. "Sometimes you've just got it, and when it goes right, it's really, really good."

Helio Castroneves was also rewarded for going off-strategy early by finishing second after starting from last on the grid having failed to post a qualifying lap.

"It was a tough one," the Penske driver said. "It was difficult to pass. But at the end of the day of the day it was a great race."

Graham Rahal followed up his Fontana win with a third place ahead of Juan Pablo Montoya, who recovered strongly from a drive-through penalty for pitlane speeding.

"I think early on we did [have a chance to win the race]," Montoya said.

"Later we made some changes and the car wasn't as good. 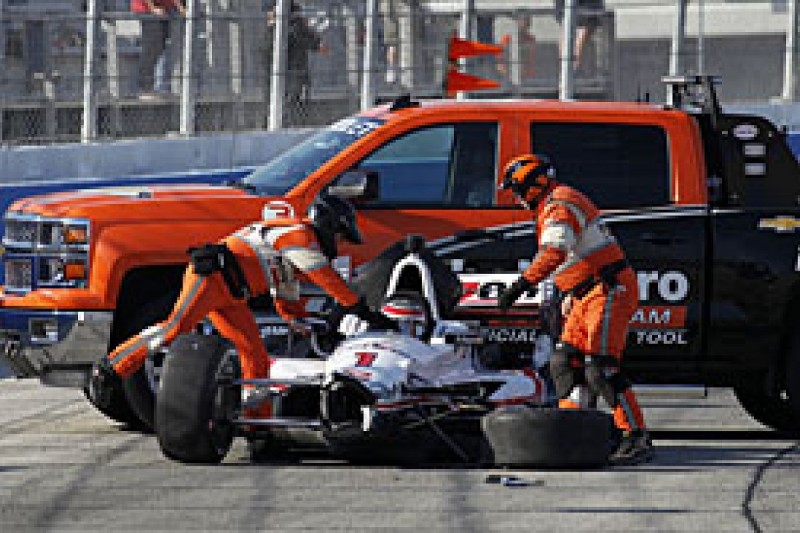 "I don't know what happened [with the penalty]; I hit the [limiter] button and nothing happened."

The Colombian leaves Milwaukee with his championship lead having grown from 46 points to 54 after Penske team-mate Will Power's day once again ended early.

The reigning champion was left with nowhere to go when Ryan Briscoe had the air taken off the front of his car by Tony Kanaan and spun up into the outside wall, collecting his compatriot along the way.

While it was a blow for Power's title defence hopes, it was also a sad end to the day for Briscoe, who had looked extremely strong in the Schmidt car during the opening stints.

Josef Newgarden's dominance of the early part of the weekend translated into a fifth place when it mattered most, but even that could have been far worse after the CFH driver lost a bag of time to an air jack problem in the pits during one of his early stops.