Newgarden, who had never previously won at the circuit, shadowed team-mate Will Power for much of the opening laps before Power - who had started on pole position - found himself blindsided by Newgarden's dive down the inside.

The move, at the end of the back straight, took place on lap 13 of 90 and from that point on the Toronto race winner had no competition as he took back-to-back victories.

In the final third of the race the only caution of the day, to recover a stalled Ed Jones, allowed Power to close back up on his team-mate but the lead pair were split by the lapped Esteban Gutierrez.

As the race restarted, Gutierrez refused to give way and even tried to dive up the inside of Newgarden at Turn 4.

That allowed the leader to pull away and claim victory by more than five seconds as Power struggled to find a way past the Dale Coyne Racing driver.

Power did have to keep an eye on his mirrors though as Graham Rahal, who took third place off Takuma Sato on lap 15, tried to get up to second place with increasingly bold moves. 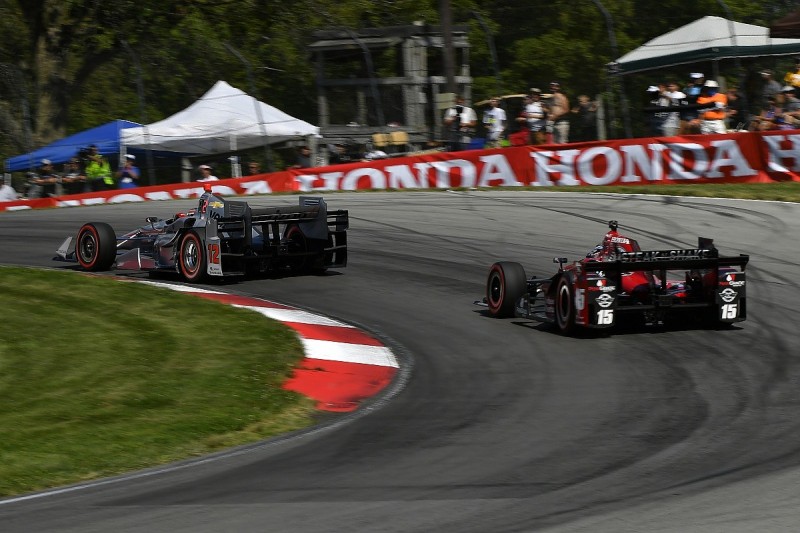 The Rahal Letterman Lanigan racer didn't have sufficient Push to Pass in reserve to get enough of a run on Power to claim the position.

Simon Pagenaud finished just off the podium in fourth, having started seventh, after a quick first pitstop on lap 17 gave him enough time to bed in his softer red-walled Firestone tyres and leapfrog Alexander Rossi and Scott Dixon.

Finishing just behind was Sato, who couldn't replicate the pace he showed in qualifying as he was having to parry attacks from Andretti Autosport team-mate Rossi - showing strong race pace as he came up from ninth place at the grid.

The Chip Ganassi Racing driver was struggling with serious oversteer in the first half of the race and lost time in the pits as his crew adjusted front-wing angles to try and cure the issue.

Rounding out the top 10 was AJ Foyt driver Conor Daly, who harried James Hinchcliffe for 10th in the closing laps of the race thanks to a bigger reserve of Push to Pass.