Castroneves took the lead from polesitting team-mate Will Power in traffic early on, with Power struggling to match his team-mate's pace.

Penske was then able to make use of cautions for crashes for Mikhail Aleshin (pictured below), Carlos Munoz and Conor Daly to make all of Castroneves' first three pitstops under yellow. 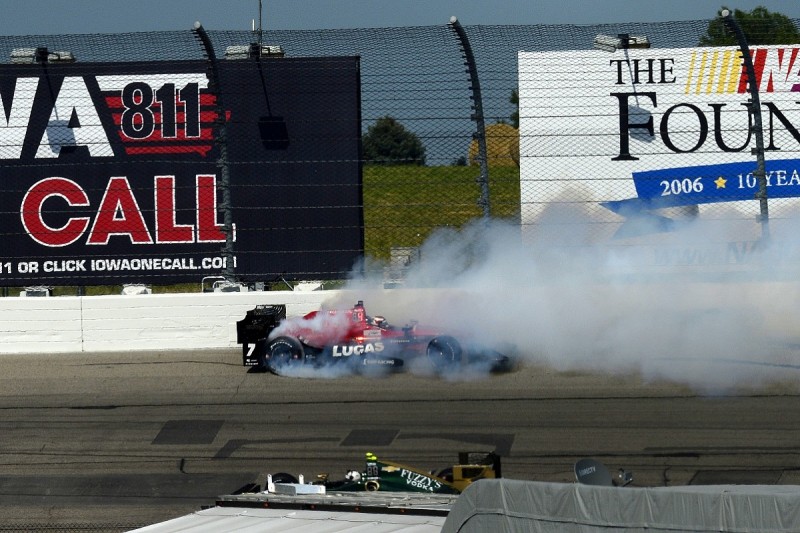 With just under 100 laps to go the red flag was brought out briefly due to light rain, and when the race restarted it was a case of who would pit first.

Ed Carpenter Racing elected to pit JR Hilderbrand from second, which allowed him to make use of the undercut and emerge ahead of Castroneves in the closing stages.

But traffic played a crucial role and allowed Castroneves on fresher tyres to retake the lead and ultimately secure victory.

That win leaves just eight points between Castroneves and Scott Dixon, who finished in eighth, in the drivers championship.

Ryan Hunter-Reay was third with an impressive drive from 15th on the grid, while Power finished fourth having been overtaken by the Andretti Autosport driver in the closing stages.

Graham Rahal was fifth having started from 10th, also making use of the earlier cautions to jump drivers in the pitstops.

Josef Newgarden came back from starting 16th to finish sixth, with fellow Penske driver Simon Pagenaud also making progress from a disappointing qualifying position as he came from 11th to seventh.

Tony Kanaan and James Hinchcliffe rounded out the top 10 behind Dixon.