IndyCar has explained the reasoning behind some of its decisions made during last weekend’s Detroit Grand Prix double-header, which were queried by teams and drivers.

One such gripe concerned the rationale behind letting the cars complete two laps under yellow before calling the first red flag that followed Felix Rosenqvist’s huge shunt at Turn 6.

His Arrow McLaren SP machine crashed when the throttle appeared to stick open, resulting in a heavy impact that moved the concrete blocks behind the tyres and bent the catch fencing out of position - which required extensive circuit repairs that lasted 80 minutes.

By contrast, when Romain Grosjean crashed at Turn 9 later in the race, the race went from caution to red extremely promptly.

Race leader Will Power was unable to fire his engine when the race resumed, and blasted the series for making a “stupid decision” to bring out the red flag.

When asked by Autosport why Grosjean’s shunt immediately resulted in a red flag, and whether this was to ensure the race finished under green-flag conditions, a statement attributed to ‘IndyCar officials’ stated that finishing races under green was “always” a priority”.

“This goal is explained in every Driver/Team Manager briefing that takes place on race weekends, with the understanding that, if possible, a Red Condition may be deployed to ensure an opportunity for a Green Flag finish in an effort to give the AMR Safety Team enough time to service an incident,” it read.

“A Red Condition is the surest way to ensure that we can resume the race without resorting to finishing the race under a FCY.

“Sometimes a Red Condition is not possible to be deployed due to not having a sufficient number of laps remaining, as we experienced in the 2020 Indy 500.

“Prior to every race, IndyCar identifies a lap window remaining, where if a myriad of factors are met, we may deploy a Red Condition to avoid finishing the race under a FCY. This is exactly what happened on Saturday.” 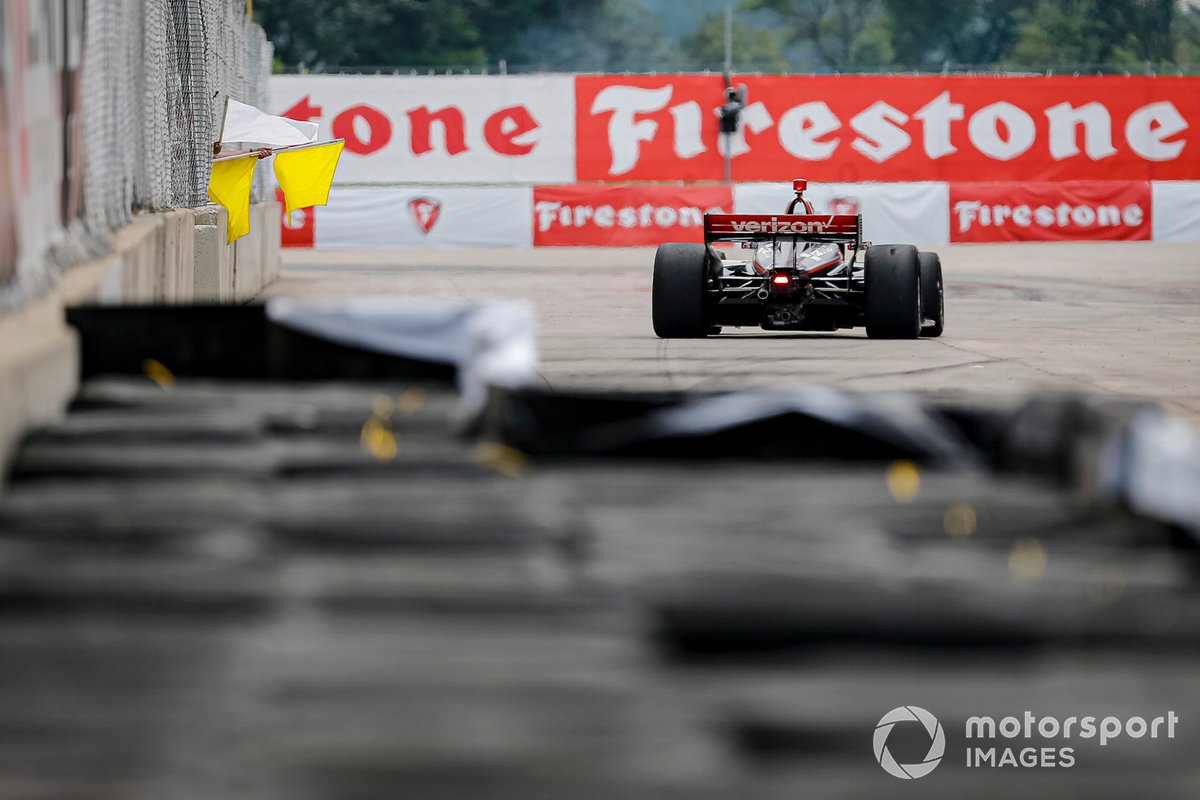 The IndyCar statement said that the displacement of the wall in Grosjean's accident was the “biggest factor” in the decision to issue a red flag, and cited the red flag at the end of the second Detroit race in 2019 for Rosenqvist's Turn 1 crash “with almost the same amount of laps remaining” as a precedent for its decision.

In Sunday’s race, AJ Foyt Racing’s Dalton Kellett came to a halt at pit exit with a loose right-rear wheel. Among the many who anticipated this would result in a caution was Tim Cindric, Penske president and strategist for Josef Newgarden, who pulled the race leader in early.

But no such caution arrived, IndyCar explained, “because we had Safety team members in close proximity that could safely manage the recovery procedure. Similar to other locations at St. Pete, Long Beach, Toronto, Road America, etc., where we recover disabled vehicles without the need for a FCY.”

After the race, Chip Ganassi Racing driver Alex Palou lamented that IndyCar hadn't swept the track clear of marbles during the caution periods to facilitate overtaking, as it does on oval tracks.

However, IndyCar explained that road and street course track sweeping doesn't occur “as the equipment we have doesn’t have the ability to do much with road/street course marbles in a short amount of time.

“IndyCar didn’t sweep during the lengthy Red Condition for the #7 [Rosenqvist] incident as we needed all available resources to focus on rebuilding the racetrack.

“Marbles are considered part of the racing surface and we try to keep safety vehicles on course to an absolute minimum. This policy was developed after many drivers indicated that they didn’t want to navigate sweeping equipment on road/street courses.”