IndyCar drivers including new Penske recruit Josef Newgarden have tested at Gateway Motorsports Park for the first time since 2003, ahead of the oval's return to the schedule next year

The Illinois venue hosted IndyCar races between 1997 and 2003, and was closed for nearly a year across 2010 and '11 before being reopened.

It will rejoin the calendar next year, with a race on August 26, and seven drivers took part in a test for tyre supplier Firestone on Thursday.

"The best initiation you can get is just getting going as quickly as possible and try and start that gelling process between everyone," said Newgarden, who drove one of Helio Castroneves' #3 cars.

"What's been surprising is how quickly we were able to go testing, how quickly we've dived into figuring out what we need for race weekends, what we need to win races, trying to understand the relationship between me and [Penske engineer] Brian Campe.

"It's kind of surprised me how quick it's all happened, but it doesn't seem to be rushed.

"This track's fun; it's definitely different. It's got a little bit of everything.

The 1.25-mile oval is considered similar to Twin Ring Motegi in Japan - last used as an oval by IndyCar in 2010 - egg-shaped with a tighter radius in Turns 1 and 2 than 3 and 4. 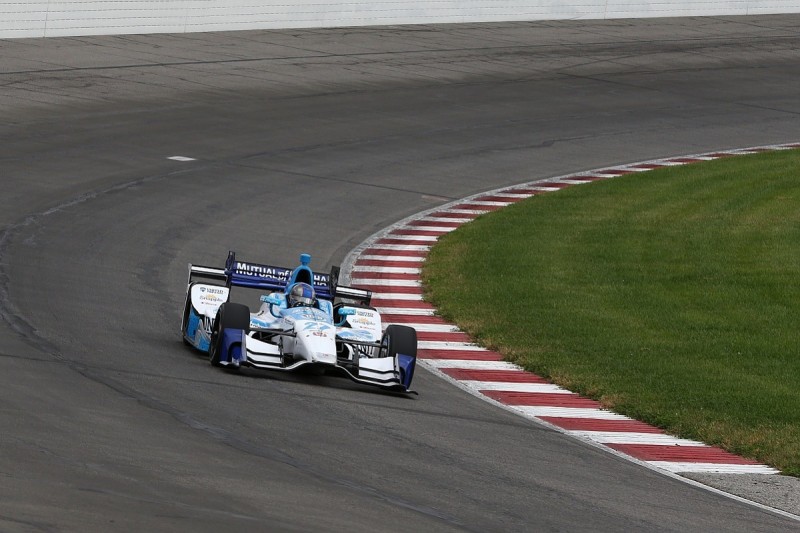 Drivers sampled various aerodynamic alterations and turbo-boost settings to help IndyCar determine its technical package for next August's race, while upgrades to the track surface and facilities are also in the pipeline.

"Early on with the amount of downforce these cars have, it's just nailed," Andretti, pictured above, said.

"We're running flat at a place I've never been [before]. The track seems fun.

"We need to get some raceability out of it so not everybody is just flat out.

"We need to evaluate some things to make sure we put on a good race for the fans."