Helio Castroneves scorched to a sensational Indianapolis 500 victory, beating Alex Palou in a thrilling battle for the lead.

Castroneves, driving for Meyer Shank in a part-time entry, swept past Chip Ganassi Racing’s Palou on the penultimate lap to claim his fourth Indy 500 victory – joining the likes of AJ Foyt, Al Unser and Rick Mears on the joint-most wins at the Brickyard.

A thrilling three-driver battle for the lead between Castroneves, Palou and Arrow McLaren SP’s Pato O’Ward set the tone for the second half of the race, as the trio dominated proceedings following the second caution period produced by Graham Rahal.

Rahal brought out the yellow flags immediately after his pitstop, exiting his stall without his rear-left wheel properly attached.

The wheel jettisoned itself from the axle, forcing Rahal into a crash at Turn 2 – as the wheel itself bounced off the front of Conor Daly’s car to leave damage to the nosecone.

Rahal, who had been the last of those to stop, was due to cycle into the lead pack prior to his ignominious exit from the race – and said his incident was “hard to accept”.

With O’Ward lurking behind the front pair following the final two rounds of stops, Castroneves and Palou traded places throughout the final 20 laps – all for the net lead as Felix Rosenqvist and Takuma Sato waited until late on before conceding to their pit stalls for their final stops.

Palou stormed past Castroneves with five laps remaining but, waiting until the dial ticked over into lap 199, Castroneves grabbed the slipstream and pulled back past – and was able to borrow a tow from a train of cars ahead to beat Palou by 0.492s. 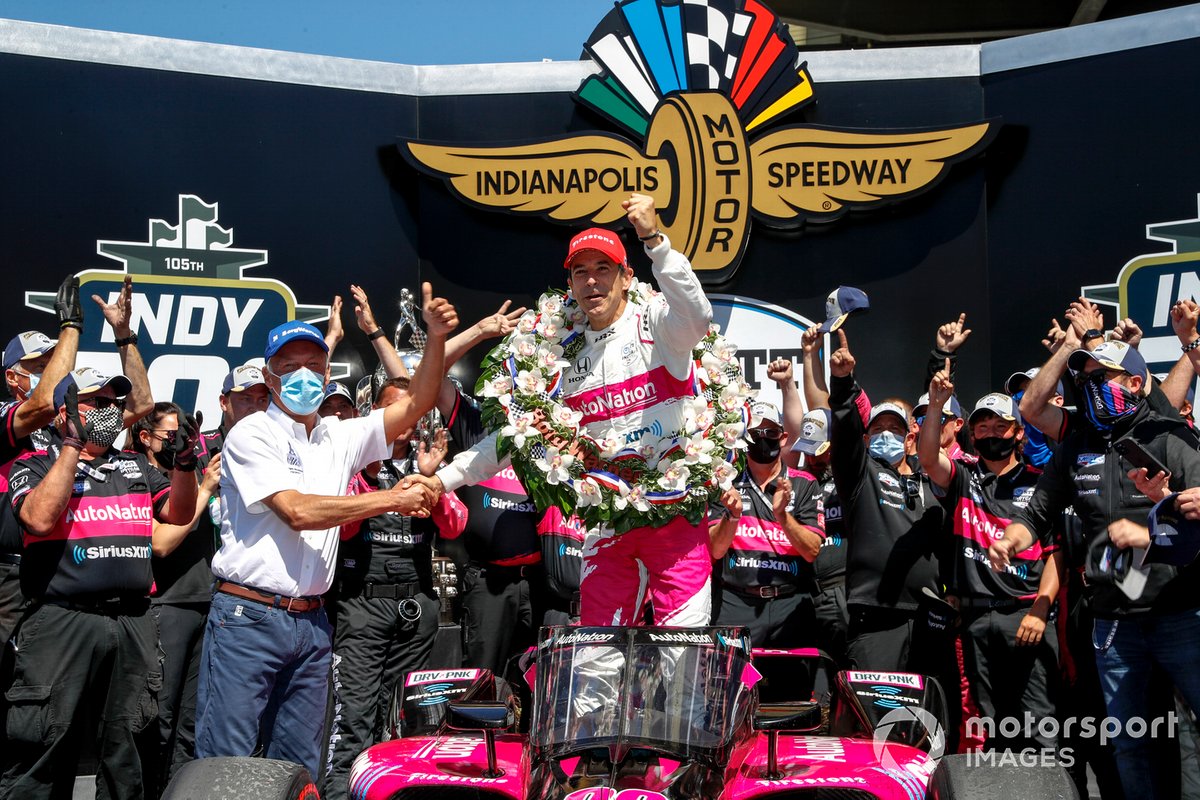 This secured a first victory for the Meyer Shank team and Castroneves’ first not driving for the Penske team.

O’Ward, who had been battling among the lead group, dropped back behind Simon Pagenaud on the final lap to finish fourth – as Pagenaud had diligently worked his way through the field having languished in 26th on the grid.

Ed Carpenter finished fifth, having converted fourth on the grid into a front-running position at the start of the race – before stalling during his first stop and having to recover lost ground.

Santino Ferrucci, running in a third Rahal Letterman Lanigan entry, was able to secure sixth place having been able to conduct a short final pitstop – as the ex-Formula 2 driver pushed his final stop for fuel to the 180th lap.

Sage Karam claimed an impressive seventh for the Indy 500-only entry of Dreyer & Reinbold Racing, which was the team’s best result at the Indianapolis Motor Speedway since Oriol Servia’s fourth place in 2011.

Rinus VeeKay followed Karam home, having led a considerable part of the first half of the race, but the Ed Carpenter Racing driver was unable to capitalise on his front-row start having been slowly engulfed by the pack after the final round of stops.

Two-time Indy 500 winner Juan Pablo Montoya, driving a third McLaren SP car, was able to finish ninth after working his way through the field – ahead of fellow veteran Tony Kanaan – who had been among the frontrunners at the start of the race before being forced to concede positions following a pitlane penalty.

Chip Ganassi Racing’s Marcus Ericsson beat the Penske of Josef Newgarden, who having his made his way up the order from his starting berth of 21st, had embarked upon an off-cycle strategy at the half-way point of the race and was able to cycle out ahead of VeeKay earlier on.

But the strategy didn’t quite pay off for Newgarden, who finished ahead of Daly – who had traded the lead early on with team-mate VeeKay and suffered no lasting damage from his contact with Rahal’s tyre.

Takuma Sato, the winner of last year’s 500, had to perform a splash-and-dash at the end and finished 14th, ahead of 2011 runner-up JR Hildebrand – the highest-placed AJ Foyt driver.

A pitlane incident for Andretti one-off entrant Stefan Wilson during the first round of stops brought out a chaotic first caution period, as the Brit locked up entering pitlane and hit the wall. 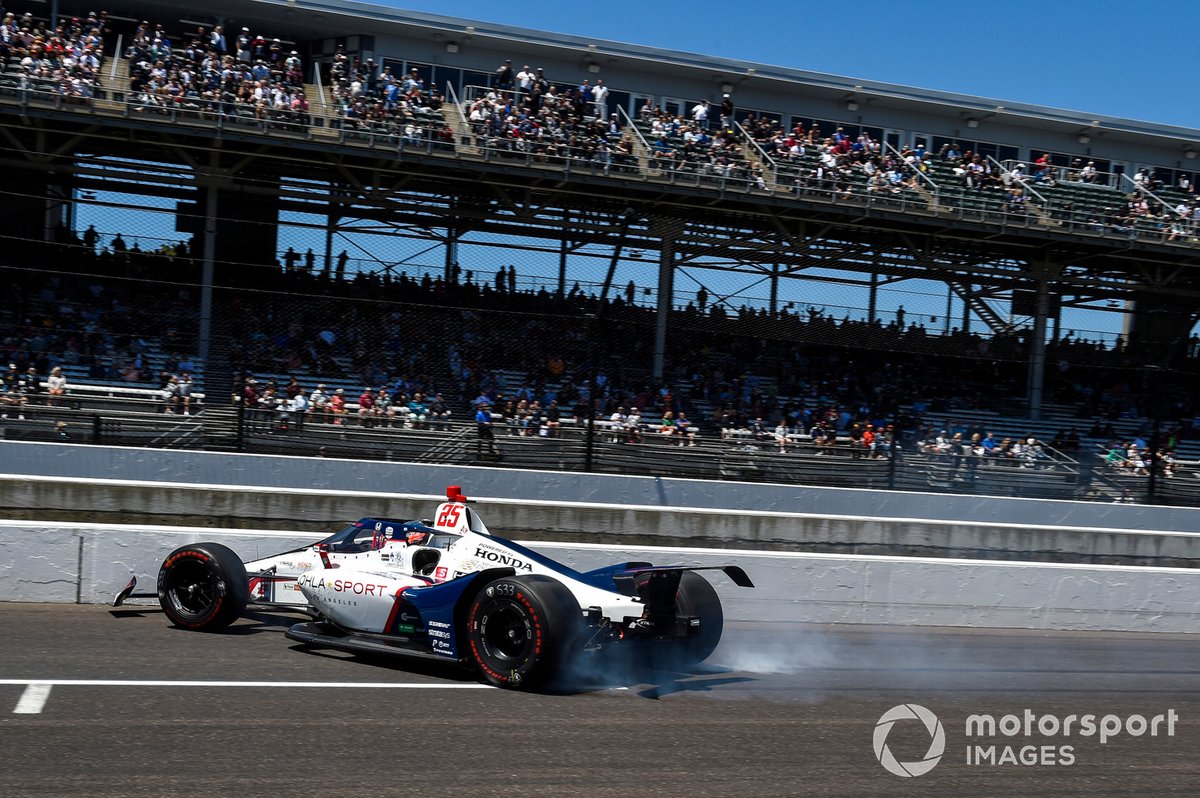 This caused numerous problems for the likes of Scott Dixon and Alexander Rossi, who ran out of fuel as they entered the pitlane for emergency fuel loads – and the cars were unable to fire back up until they had cooled down.

Dixon got back on the lead lap and finished 17th, 9s behind early leader Colton Herta.