A string of yellows turned the latter part of the race into a showdown between different strategies, with Rahal Letterman Lanigan's Oriol Servia, Pagenaud, and Andretti driver Ryan Hunter-Reay running 1-2-3 in the final laps, but marginal on whether they would be able to make the finish.

Hunter-Reay's situation was made all the more precarious by the fact that he had Helio Castroneves just behind him, the Brazilian easily capable of making it to the end and in no mood to save fuel.

Servia blinked first, pitting from the lead with three laps remaining, however both Pagenaud and Hunter-Reay elected to push on. The decision paid off - running on fumes, both made it across the yard of bricks to secure first and second, leaving Castroneves to complete the podium in third.

It was an incident-laden race right from the beginning, starting with surprise polesitter Sebastian Saavedra stalling on the line. 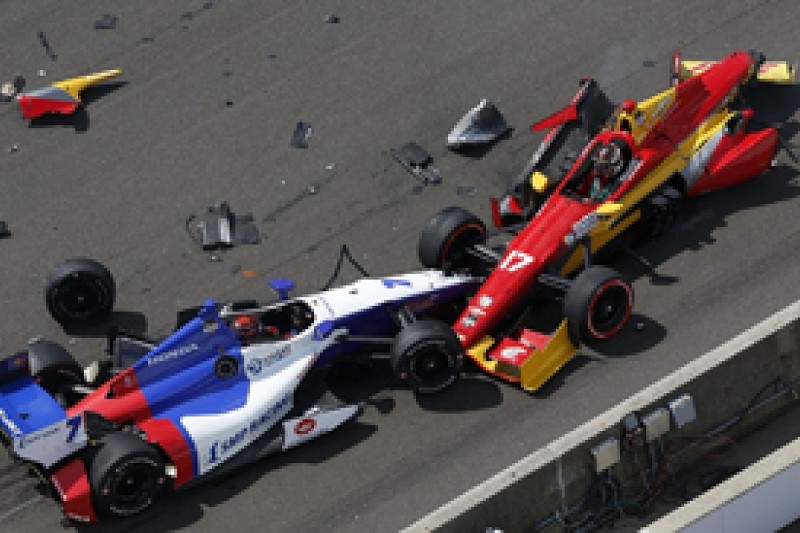 Several cars managed to swerve around him before both Carlos Munoz and Mikhail Aleshin ran into the KV Dallara-Chevrolet's rear. The impact showered the main straight with debris and prompted a lengthy caution period, although all three drivers escaped unhurt.

Other significant incidents included a clash between Will Power and Scott Dixon that ended with the latter needing to be retrieved from the grass, and a frightening crash involving Franck Montagny and Martin Plowman, who were making one-off appearances for Andretti and AJ Foyt Racing respectively.

The rear-end impact launched Plowman's car into an airborne spin, although he landed on his wheels and was able to continue the race. Montagny retired on the spot, and the incident leaves Andretti scrambling to get the car repaired in time to hand it over to Kurt Busch for the opening day of Indy 500 practice on Sunday.

There was also drama on a restart when Juan Pablo Montoya punted Graham Rahal into the outside wall as the pack was accelerating out of the final corner; an indiscretion that earned the Colombian a drive-through penalty.

The early star of the race was rookie Jack Hawksworth, who took the lead from Hunter-Reay shortly after the first restart and looked a class apart during the first half of the race.

The Brit's lead over Pagenaud ballooned to more than four seconds before the leaders opted to stop during the caution for Dixon's trip into the scenery, and some slick pitwork from SPM allowed the Frenchman to emerge ahead of his BHA rival.

From that point, Hawksworth found himself trapped behind cars on alternate strategies and eventually finished seventh.

Andretti's James Hinchcliffe pulled off the track immediately after a restart on lap 57, and was taken to hospital with an unspecified medical problem. There has been no official confirmation regarding his condition.