The Andretti driver becomes the first American winner of the race since Sam Hornish Jr in 2006.

A late-red flag set up a six-lap sprint to the finish, and an initial threat from Marco Andretti swiftly gave way to a two-way battle between Castroneves and Hunter-Reay.

The racing over the final laps was the hardest of the afternoon, with the lead changing with every lap, and Hunter-Reay almost touching the grass at one point in an effort to pass Penske's Brazilian.

He took the lead for the final time just as they passed the white flag, but Castroneves remained close enough to force a drag race down to the line.

"It's a dream come true," said Hunter-Reay, who started from 19th. "I can't believe it. There was no practice [for those last few laps]. We never ran those lines earlier in the month. 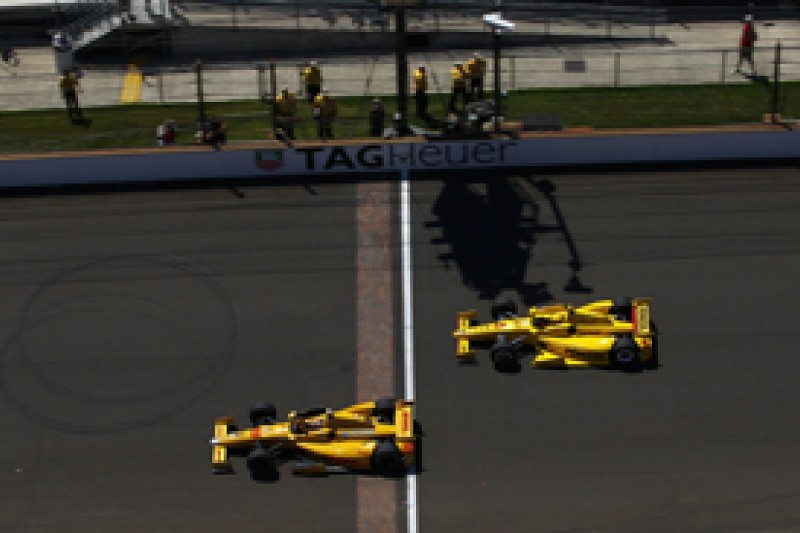 "Everything everybody did at the end there was all new. I don't even know what to think."

Castroneves was unable to hide his disappointment after coming within inches of joining the ranks of four-time winners at the Brickyard, but was gracious in defeat.

"It's a shame to come so close, but today is Ryan's day," he said. "I wanted to win for Roger [Penske] so bad - that was a great fight. I hope it was great on TV. Second is good... but second sucks."

Marco Andretti hung on for third ahead of team-mate Carlos Munoz.

To lean on a cliche, the race was the classic 'game of two halves'. The first segment passed entirely under green flags; a scenario without precedent in the time that yellow flag statistics have been recorded.

But the field made up for it over the second part of the race. A clutch of yellows were triggered by single-car accidents by the likes of Charlie Kimball and Scott Dixon, but the big one came right near the end.

Ed Carpenter and Townsend Bell were battling on a restart when James Hinchcliffe decided to join the fight and attempt to force a three-wide charge through the first corner. 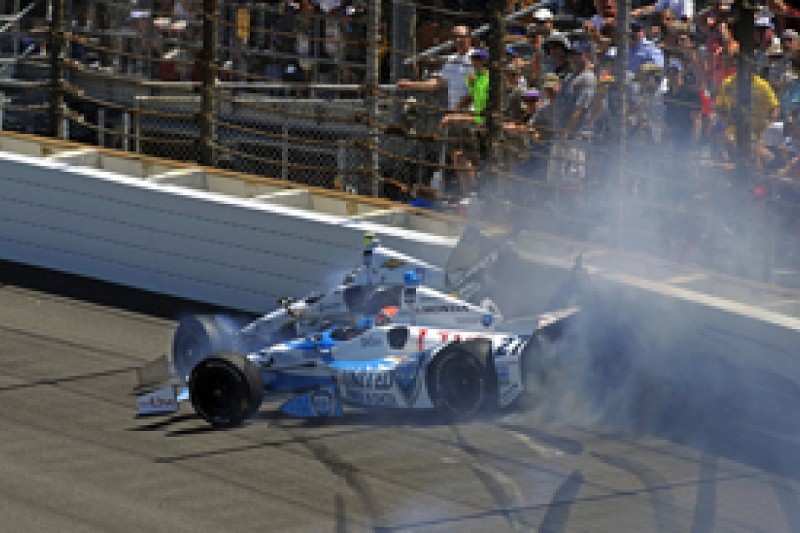 The resultant contact put both Hinchcliffe and Carpenter out of the race. They had been fighting for second at the time, and Carpenter in particular felt - with some justification - that he had been robbed of a potential win.

Not long afterwards, race control had just signalled a caution to clear a section of debris shed by Jacques Villeneuve's car when Bell crashed heavily at Turn 2, showering the track with shrapnel and prompting a red flag with the hope of avoiding a finish under caution.

Juan Pablo Montoya looked like a potential contender for much of the race due to the freakish fuel mileage that he was achieving in his Penske car, but his chances were dealt a blow when he was penalised for speeding in pitlane - an identical penalty to the one issued a short time beforehand to team-mate Will Power.

The time lost in serving the penalty dropped him into the middle of the pack, but he was able to regain some lost ground with the help of the cautions and crossed the line fifth.

Kurt Busch's attempt to do the Indy 500/Charlotte 600 double might not have been helped by the red flag, which left him with less time to get to Charlotte in time for the NASCAR race start, but he had every reason to be happy with his IndyCar debut.

He remained in the top half of the field right through the race, and made up some positions late on to finish an excellent sixth, equalling Tony Stewart's record result for the best finish in the Indy portion of the double.