The Ganassi driver spent the opening phase of the race stalking early leader Will Power, and claimed the advantage when the Australian was delayed in the pits.

The pair remained at the front during the next stint, but the key moment came when Dixon capitalised on one of the many caution periods to make his final stop under yellows and rejoin in third behind Power and Luca Filippi, both of whom still had a stop to make.

Their stops a short time later handed the lead back to Dixon, who put in an extraordinary lap on the final restart to open a gap of 2.7s over Simona de Silvestro in just one tour.

He added another 0.5s next time around, although the buffer would prove unnecessary when Mike Conway hit the tyres with three laps to go and forced the race to finish under yellows.

The effects of Dixon's win were magnified by a catastrophic weekend for championship rival Helio Castroneves, who woke up this morning with a 49 point lead, and goes to bed tonight with that advantage having been reduced to just eight.

The Brazilian qualified near the back, and then lost several laps in the pits having a gearbox problem attended to. He later lost more time to an array of minor incidents, but by that point it was academic.

Meanwhile, Conway's incident may inadvertently have cost his Dale Coyne team-mate a second place, as Justin Wilson was applying intense pressure to de Silvestro before the appearance of the yellows forced him to back off.

Third was still a strong result for the Briton considering that he had been forced to pit with a puncture halfway through the race.

But de Silvestro was equally good value for the runner-up position; the KV driver having spent the entire afternoon in the top five before securing her first career IndyCar podium.

Simon Pagenaud was fourth after a race spent mostly within striking range of the podium punctuated by one or two bad restarts, with Josef Newgarden rounding out the top five. 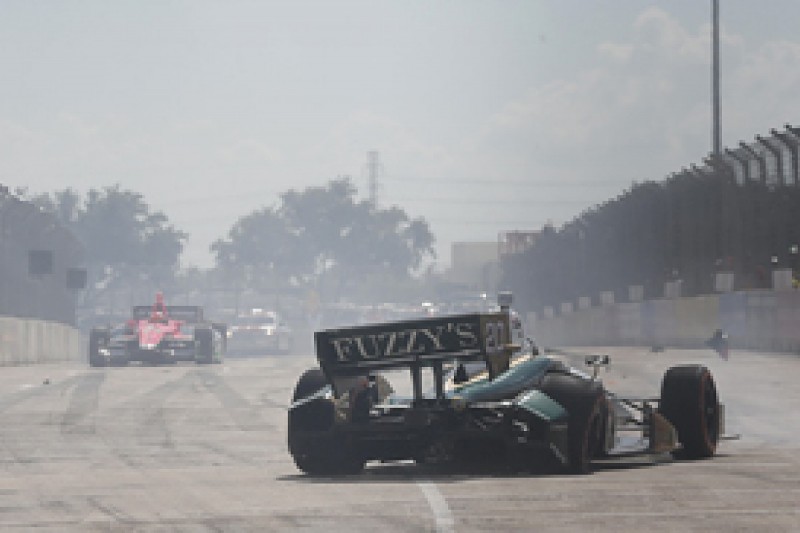 The final count of seven caution periods points to an eventful afternoon, with some of the most significant misfortunes affecting the Andretti camp.

James Hinchcliffe encountered a problem on the start and was hit by both Tristan Vautier and Ed Carpenter, while Ryan Hunter-Reay was one of many to fall victim to mechanical problems.

It was also a disastrous outing for polesitter Takuma Sato, whose miseries included an early puncture, a broken radio, and a trip into the tyre barriers.