Ex-Formula 1 driver Romain Grosjean says he "used to be an asshole as a team-mate", but has told new IndyCar stablemate Ed Jones he'd "like us to be friendly"

The Frenchman, who will race all 13 of the 2021 IndyCar Series' road and street courses for Dale Coyne Racing, completed his first test in the car on Tuesday at Barber Motorsport Park.

Asked if the more relaxed atmosphere in IndyCar was suiting him, he said: "It's been great. I've had already some good interaction with Sebastien Bourdais.

"He was next to me [in pitlane] so that was easy. Takuma Sato came over.

"I saw some of the other guys. Simon Pagenaud in the pitlane - he was driving and I gave him a wave and he gave it back.

"So I think generally it's been great in that respect."

Regarding team-mate Jones, Grosjean commented: "We have a good relationship, as well. I told him I used to be an asshole as a team-mate back in the days, but now I'm 35 and I'd like us to be friendly.

"On track you want to beat them, there's no doubt, but outside of the track I think if we can be friends it's mega... [The atmosphere in IndyCar] is definitely very different from what I'm used to."

As for the car itself, Grosjean said: "I just had to adjust a little bit to my new driving position and so on, but things very quickly felt quite smooth, which was good, and then I discovered the joy of not having power steering, and I don't regret all those hours in the gym, but maybe I'll do some more just in case...

"It's definitely the hardest steering wheel I've had to cope with. The first few laps, the muscles weren't quite warmed up or ready for it.

"It got better at the end, which is always a good sign. I'll know exactly where to work in the gym and what to do. 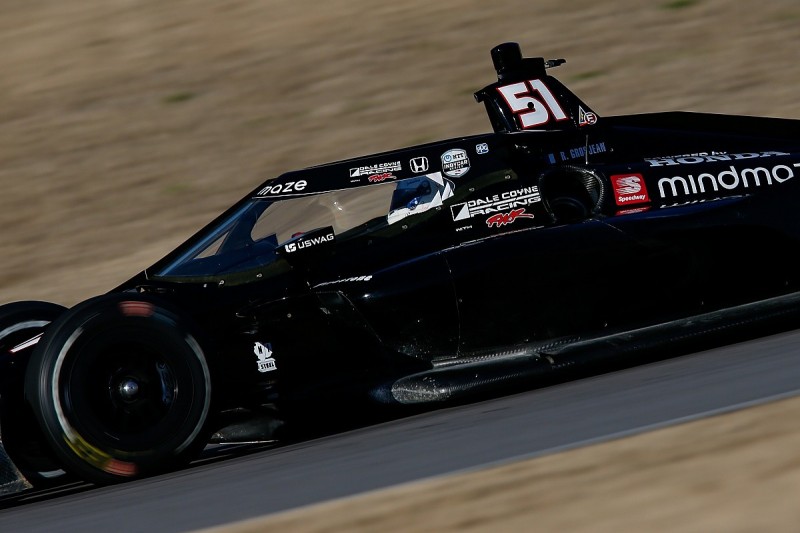 "I also know that's the hardest track of the year, which is always good to start with so you have a baseline of what it's going to be like.

"But yeah, I think I can fine-tune my training. I didn't know really what to expect, and now it's pretty clear."

Grosjean played down any problems with the hand that was severely burned in his infamous crash at last November's Bahrain Grand Prix.

"It's not perfect," he said. "There's a nice big blister on my left thumb which is not pretty but driving-wise it was OK.

"It wasn't painful. I was being a bit careful on some of the curbs, but generally, it hasn't been a limitation."

Grosjean turned 83 laps on Tuesday, losing some time in the morning after a spin into the Turn 1 gravel, but thereafter getting a feel for the evolving track temperatures.

He put the incident down to simply finding the limits.

"Every time you come testing you have to try to find your limit, which I did this morning in Turn 1," he said.

"I wasn't quite happy with it, but it happened, and I actually understood something you could do in Formula 1 you maybe cannot do in IndyCar, so actually that was kind of a good learning experience.

"I just went too fast in. When I was on the brake, I also picked up the throttle which you do in high speed [turns] but because it's a mechanical diff it does open the diff when you do that, and therefore it makes the car loose, whereas in Formula 1 it would actually stabilise the car.

"So I would say it was a learning experience and then I didn't do it anymore, and it was better."