Alex Palou held off a late assault from Will Power to secure his maiden IndyCar win at Barber, converting a two-stop strategy into victory by just 0.4 seconds.

The Chip Ganassi Racing driver produced a masterful performance in the lead, but with Power bearing down on him, Palou hit the trigger on his remaining push-to-pass on the penultimate lap to build enough of a buffer to keep the Penske driver behind.

Palou began the race from third on the grid, and began the opening corners tracking the lead pair of polesitter Pato O’Ward and Alexander Rossi.

Then Power’s Penske stablemate Josef Newgarden precipitated a hefty lap 1 incident, having lost traction after running on the grass on the exit of Turn 4 to spear across the circuit, collecting a number of cars in the process.

Andretti’s Colton Herta careened into the side of the sideways Newgarden, who then went into the incoming Ryan Hunter-Reay – as new Arrow McLaren SP recruit Felix Rosenqvist was launched into the air after collecting Carlin’s Max Chilton.

O’Ward then retained the lead at the restart, although struggled on the opening stint on the softer option tyres and complained that his McLaren SP-run felt “undriveable”. 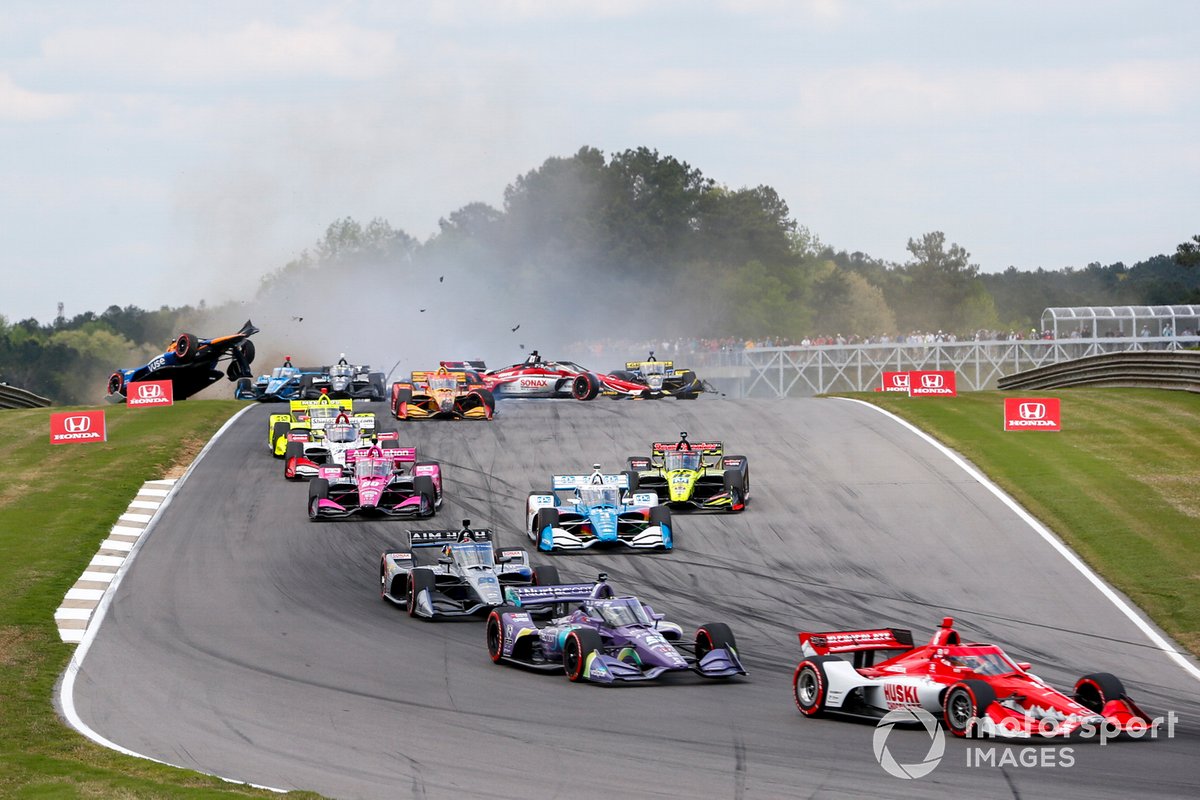 The Mexican pitted at the end of lap 18, along with Rossi, which unshackled Palou as he was able to begin to bring his two-stop strategy into play.

Starting to build a gap over the now second-placed Power, Palou was able to keep up his pace until pitting a third of the way through the race – emerging ahead of O’Ward.

But O’Ward was able to charge past the Spanish driver to reclaim the net lead of the race four laps later, but had to pit once more at middle distance on a three-stop race plan.

Palou was left in the driving seat from there, but Power then became his main threat – scything down the advantage as the Australian sought to kick-start his 2021 title aspirations with victory.

With the gap falling, Palou elected to pit one more time with 29 laps remaining for fresh primary tyres, with Power following suit a lap later.

From there, it was a case of managing tyre wear and fuel, but Power continued to press Palou as the Ed Carpenter Racing car of Conor Daly ahead of them refused to acquiesce to blue flags to remain on the lead lap. 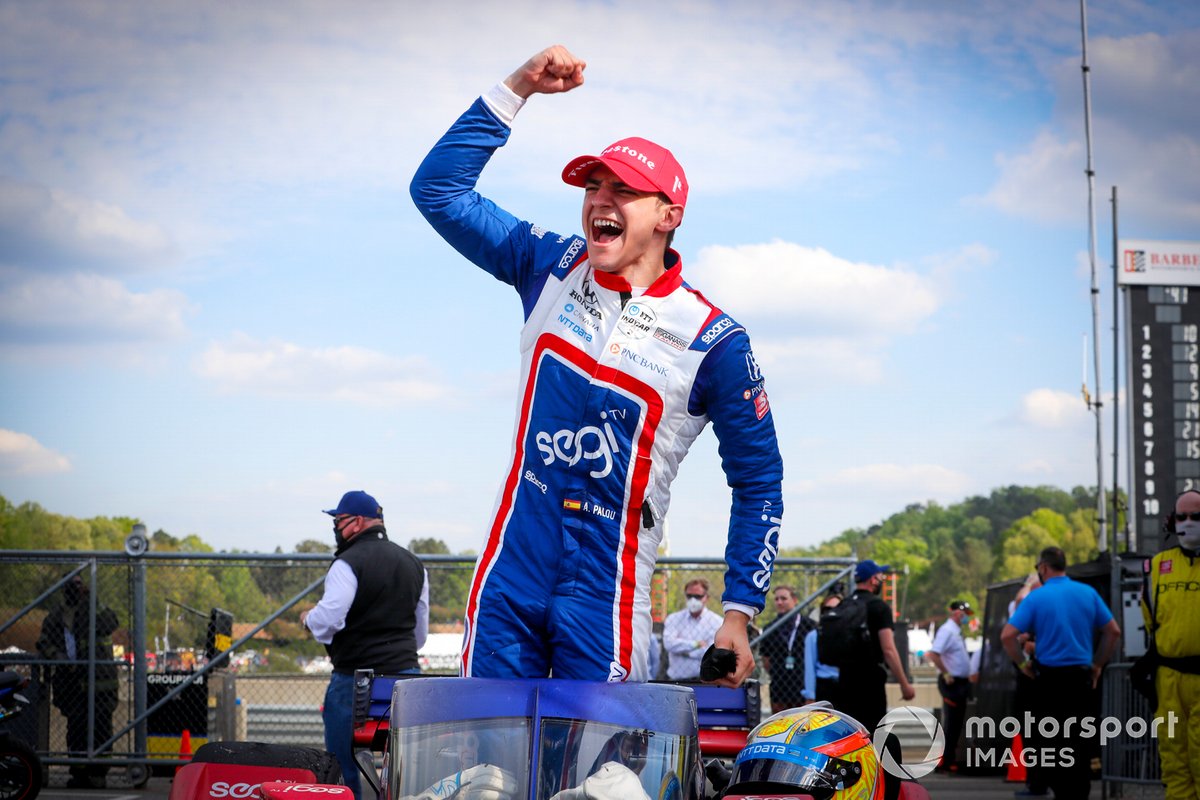 Although Power got to within a second with two laps remaining, Palou depleted his push to pass to keep the 2014 IndyCar champion behind him – claiming his first win in his first outing with the Ganassi team.

Power crossed the line 2.5s ahead of reigning champion Scott Dixon, who began to feel O’Ward’s breath down the back of his neck as the polesitter attempted to take advantage of his fresher rubber.

Sebastien Bourdais claimed an excellent fifth thanks to an opportunistic strategy from his AJ Foyt team, in which he conducted his first stop under the second caution period – brought out for seven-time NASCAR Cup champion Jimmie Johnson, who spun at Turn 12 after getting loose from Rinus VeeKay’s dirty air.

Bourdais was then able to make the most of his fresh primary tyres to scythe through the midfield runners early on, as did VeeKay behind him.

VeeKay was also involved in the lap 1 crash but managed to keep going without damage, and recovered from the broken finger he sustained in a testing crash at Indianapolis last week with aplomb to claim sixth place.

Graham Rahal, who tiptoed through the wreckage on lap 1, was also able to rise through the order as his Rahal Letterman Lanigan squad was able to unlock performance during the earlier warm-up session – finishing seventh ahead of Marcus Ericsson.

Ericsson was running in fourth place for much of the final stint, but his earlier stop forced him to save fuel – and the ex-Sauber F1 driver had to take a back seat to the charging Bourdais and VeeKay.

The Swede then stopped on the cooldown lap at the end, having run out of fuel, but still claimed eighth ahead of Rossi – who struggled to make his three-stop strategy having been in victory contention early on.

Romain Grosjean was the best of the newcomers, finishing in 10th place - albeit 24s adrift of Rossi, but 5s clear of Jack Harvey in 11th.

Three-time Supercars champion Scott McLaughlin started brightly and kept ninth place, but he found himself dropping down the order on a three-stop and eventually completed his race down in 14th, battling with two-time Indy 500 winner Takuma Sato at the death.

After the lap 1 crash, Chilton was able to return after only losing two laps, while Rosenqvist and Herta rejoined the fray later on in the race to try and claim a greater collection of championship points - Rosenqvist classified 21st and Herta one place behind.