Power held provisional pole by 0.3 seconds with less than a minute remaining, only for Dixon to beat him with his final flying lap.

The Penske driver still had one opportunity to reclaim the advantage, but that hope was dashed when he made a mistake in the middle of the hairpin.

Dixon was fortunate to be in the Fast Six in the first place. The New Zealander was initially classified seventh in the second qualifying phase, which would have seen him eliminated had Graham Rahal not gone into the tyres at Turn 8.

Race control initially tried to manage the incident with a local yellow, but when Tristan Vautier ran into the rear of Rahal's stricken car a few moments later, the session was red-flagged.

Rahal was consequently docked his best lap time after being deemed responsible for the stoppage, thereby promoting Dixon to sixth.

Vautier escaped punishment, and remarkably, escaped with damage so minor that he was able to participate in the Fast Six a couple of minutes later.

Also of significance was the fact that both of Dixon's main championship rivals were knocked out of the second qualifying phase, meaning that Helio Castroneves and Ryan Hunter-Reay will be forced to start several rows behind the Ganassi driver.

In their absence the remaining places on the first three rows were claimed by Simon Pagenaud, Justin Wilson, Josef Newgarden and Vautier. 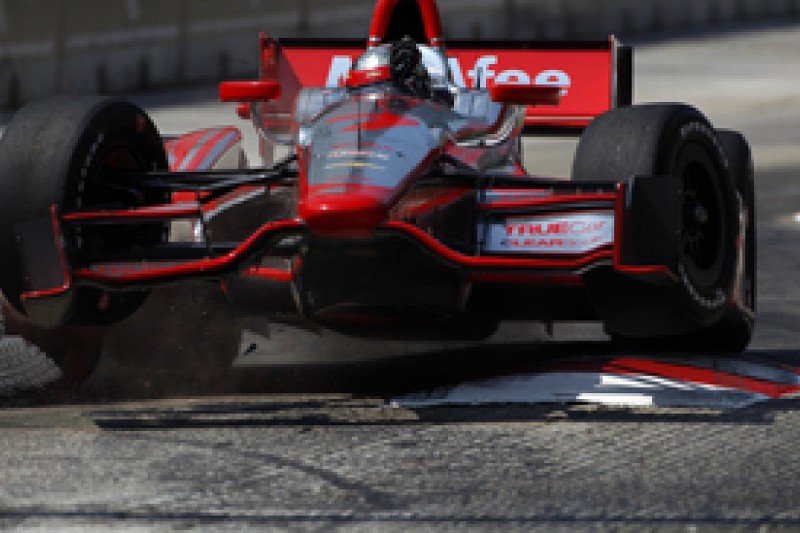 Both Sebastien Bourdais and EJ Viso's sessions were curtailed by damage sustained through getting things wrong at the chicane.

The latter's contact with the outside wall also left the track covered with debris that comprised the runs for other drivers late in the first phase.

It was also a tough afternoon for Dario Franchitti, who was eliminated early after struggling with a car that he said "felt decent, but just wasn't fast enough."