Westbrook brought the Spirit of Daytona car home first after a late fuel stop by Ganassi's Joey Hand and then a yellow flag finish gifted them the win and the championship lead.

Hand still finished second with Scott Pruett but will rue the stop, which came just before the final caution.

The Action Express pair led the Prototype field away when officials ruled that teams would start in championship order, because of a cancelled wet qualifying session.

They pulled away initially, with the second Action Express car of Dane Cameron and Westbrook entertaining with a brilliant battle for second.

Cameron's eagerness got the better of him though on the hour mark when he collided with a Prototype Challenge car and sustained a puncture.

Ganassi had a spell in the lead thanks to brilliant pit timing, calling Hand in just as the course went yellow, while Wayne Taylor Racing also moved into contention.

Approaching the halfway mark, Jordan Taylor led from Barbosa and Scott Pruett, before Barbosa made sure Action Express took the mid-race NAEC bonus points when he swept past Taylor at the inner loop; the Wayne Taylor driver cutting the chicane mid-battle.

The lead Action Express pair then led again until the final two hours, pitting at the first sight of rain.

Taylor stayed out on slicks; this was decisive as the WTR Corvette came out ahead of Pruett and Fittipaldi in brother Ricky's hands.

He then built up a 25s lead, but it was shortlived as low visibility in the ever wetter conditions meant first a yellow, then a red flag.

The race was restarted for a 30-minute shootout, and Taylor crashed at the penultimate corner and also damaged Hand's car when trying to pit.

Hand still pulled away but needed to pit for fuel, which handed the lead to Westbrook. A finish under the yellow flags meant that the SDR team's win was secure.

Falken Porsche driver Wolf Henzler prevailed in tricky conditions to claim his first win in the USC alongside Bryan Sellers.

Patrick Pilet took the lead early on as many in the GTLM class struggled to get the power down on the initially damp track.

Around the hour and 20-minute mark, Pilet came under pressure from John Edwards in the RLL BMW.

Pilet was firm in his defence but was powerless to deny Edwards diving up the inside into the inner loop.

But two hours later it all went wrong for Edwards as, having just taken the wheel back from Lucas Luhr, he locked up on cold tyres at Turn 6 and crashed out of the race.

After the restart, the class settled down again with the second Corvette of Tommy Milner leading for a couple of hours save for pitstops.

Henzler was second and Bill Auberlen in the other BMW was third when the red flag came out.

In a frantic run to the finish after the restart, Milner crashed in the wet and handed Henzler a lead he would not lose.

Bamber fought back to second while Auberlen slipped to third. 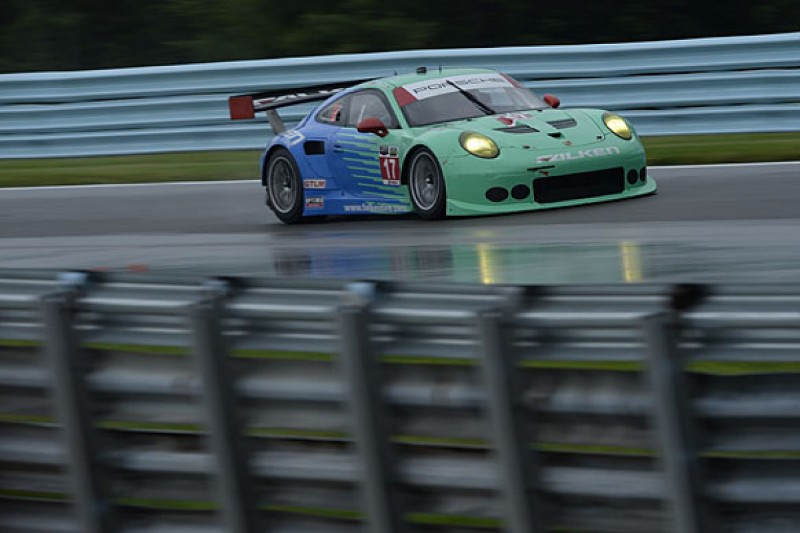