An earlier collision with Jimmie Johnson's #48 AXR Cadillac had helped the JDC-Miller car fall a lap behind in the first half of the race, but after hours of toil, the #5 had managed to return to the lead lap following a caution period.

Mike Conway's #31 AXR Cadillac ground to a halt on track with under two hours to go, prompting all the prototype cars to pit in anticipation of the seventh caution period of the race, and allowing Bourdais in his own Cadillac to return to the lead lap.

The JDC-Miller team then began to swashbuckle its way through its DPi class rivals, clearing Alexander Rossi in the Wayne Taylor Racing Acura - the WTR car had been suffering from an intercooler issue following earlier contact.

Mazda's Oliver Jarvis then pitted to hand over the RT-24P car to Harry Tincknell with just over an hour to go, and that triggered other teams to respond.

One of those was Chip Ganassi Racing, which reportedly made a late call to race leader Scott Dixon to bring him in just after he lapped a GTLM BMW. As Dixon tried to swerve the #01 Cadillac onto pitlane, he was struck hard in the right front corner by the BMW, necessitating steering repairs and a new nose, costing the car three laps.

Thus Bourdais, driving the JDC-Miller Cadillac that had run at least one lap down for the majority of the race zoomed into the lead with little more than hour to go with a seven second lead over Tincknell’s Mazda - which became eight when he made his final stop.

After a final caution period for a GTD crash, Bourdais escaped initially from Tincknell at the restart, but a couple of slow laps left him within striking distance of the Mazda before edging away again.

But Kamui Kobayashi in the #48 had deposed both the Acuras and had moved onto Tincknell’s tail – and occasionally alongside him, relieving the pressure from Bourdais.

Bourdais then crossed the line with 1.4s over Tincknell, claiming a famous victory as Kobayashi was just 0.2s further back having been resisted by Tincknell. 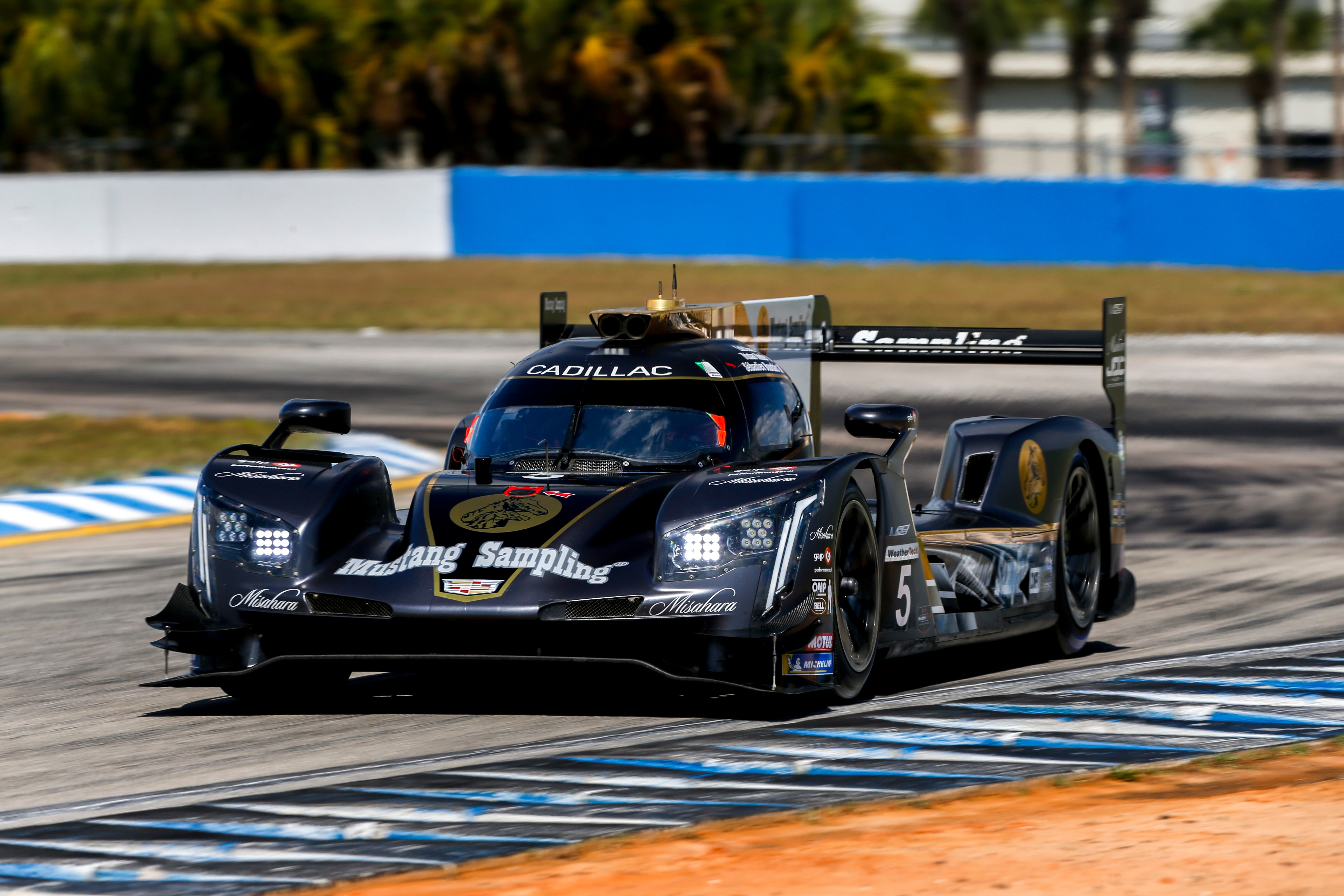 With Kobayashi's Cadillac demoted to seventh and last in the DPi class, as AXR caused a drive-time infraction by leaving Simon Pagenaud in the car too long, the Meyer Shank Racing and WTR Acuras were promoted to third and fourth respectively.

The Chip Ganassi Cadillac was left two laps down in fifth after Dixon's earlier incident.

LMP3 developed into a feisty four-way battle in the dying hours, until the Forty7 Motorsports Duqueine of Oliver Askew suddenly died temporarily, consigning it to fourth.

Mathieu Jaminet crossed the line first among the GTLM runners to secure victory for the WeatherTech Porsche team, taking advantage of a class lead collision between the #3 Corvette and the #25 RLL BMW.

Garcia, who had led the class for most of the race, had struggled on pace and lost ground to both BMWs and the sole Porsche 911 RSR, but re-took the lead having required less fuel at the at his penultimate stop - while the #24 BMW caught fire due to a fuel spillage as John Edwards switched places with Jesse Krohn.

Although Krohn returned to the circuit, he was a lap down in fourth, as Connor De Phillippi took over the other BMW from Philipp Eng and Matt Campbell tagged out of the Porsche for Jaminet.

However, Jaminet got ahead after the final stops, then lost out to De Phillippi after the final restart, as the BMW started trying to close down Garcia. Having caught up, he nudged into the Corvette at Turn 7, and pushed it wide - both sustaining damage.

De Phillippi recovered with his damaged car, but ran wide at Turn 15 and then had to serve a drive-through penalty.

Thus Jaminet’s Porsche grabbed the lead, the limping Corvette was so slow that De Phillippi reemerged from his penalty still in second and the one-lap down #24 BMW moved up into third. 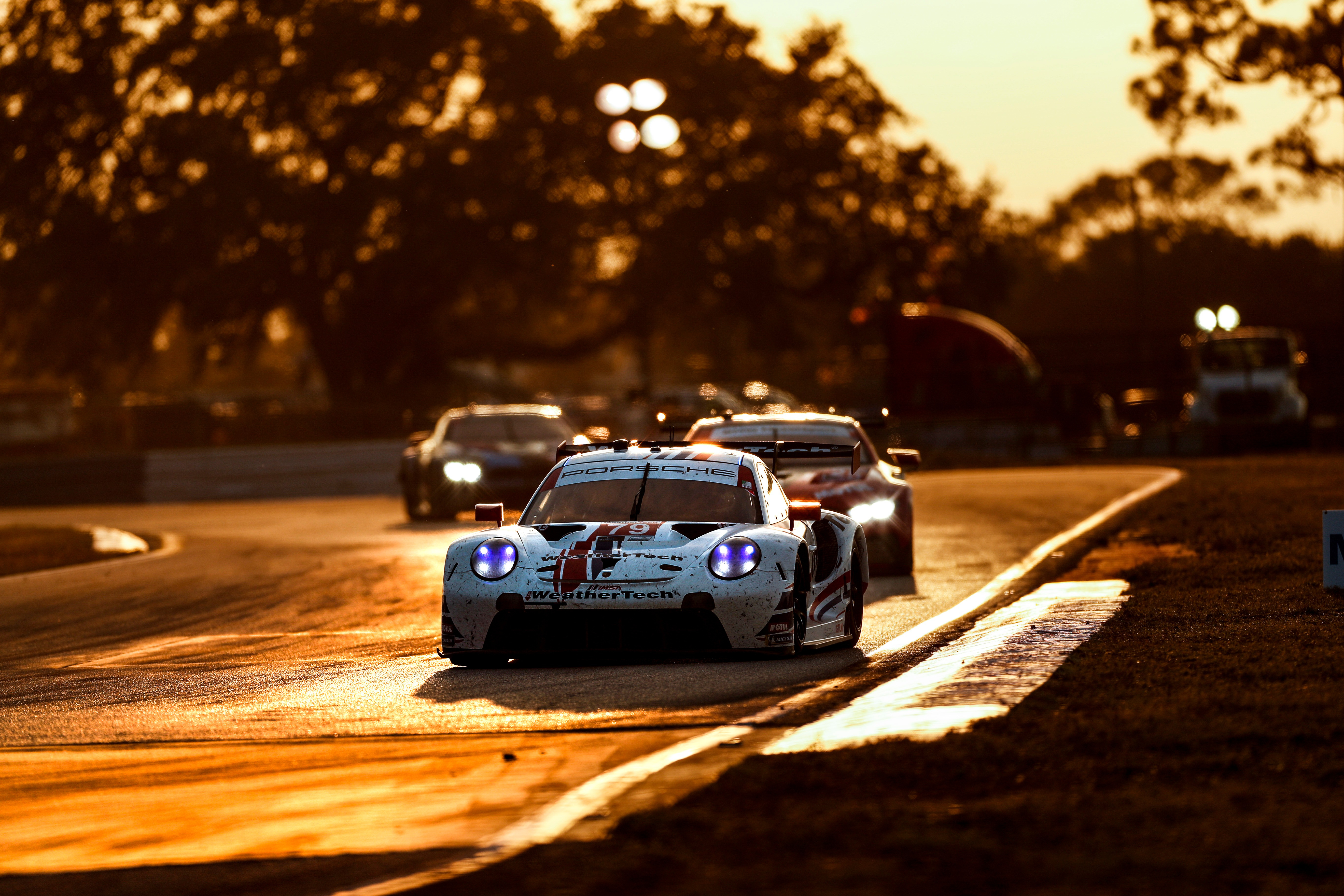 Laurens Vanthoor and Patrick Long completed a Porsche 1-2 finish in the GT Daytona category, as the Pfaff Motorsports team controlled the class expertly.

Zacharie Robichon took over from Vanthoor earlier in the race, after the Belgian had reclaimed the lead from the Paul Miller Racing Lamborghini.

Wright Motorsports' Porsche had tailed Robichon by seven seconds with the final three hours remaining, but had to serve a drive-through penalty with Trent Hindman at the wheel for having one too many pitcrew members over the wall - dropping to sixth.

The GTD cars hit the pitlane during the penultimate caution , the Pfaff Porsche emerging still in front – now driven by Vanthoor once more.

Zach Veach, taking over from Frankie Montecalvo in the Vasser Sullivan Lexus, lost out because he had pitted under green - moments before the yellows. Veach then sprinted away before the drop of the green flag – and then had his rear bumper knocked onto the tyre by an impact from Vanthoor, leaving the ex-IndyCar driver having to pit for repairs and then serve a drive-through penalty.

Vanthoor was not penalised and rocketed away from second-placed Ross Gunn in the Aston Martin Vantage, who was ahead of the Wright Motorsport Porsche now driven by Long.

Long then cleared Gunn, bringing the Wright car back into second place, ahead of a final caution period when the #75 Mercedes-AMG GT3 driven by Maro Engel shed a wheel coming onto the pit straight, spinning and striking the wall.

Vanthoor pulled away from Long at the restart, leaving Gunn in third to secure a Porsche 1-2 finish.

Team Hardpoint's Katherine Legge and Magnus Racing's Andy Lally clashed while fighting over fourth place - Legge was perceived to be at fault and was penalised, dropping to fifth behind Lally's Acura.