The pair enter the season finale just two points apart after Taylor's team-mate Dane Cameron gave up victory on the penultimate lap at Laguna Seca last time out, allowing Taylor and Helio Castroneves through to win.

Driving the #7 Acura ARX-05 he'll share with Castroneves and Alexander Rossi, Taylor lapped the 3.74-mile course in 1m46.874s to beat outgoing Wayne Taylor Racing Cadillac DPi-V.R driver van der Zande - whose seat is set to be taken by Taylor next year - by 0.251s.

Van der Zande, who shares with Ryan Briscoe and Scott Dixon, was 0.015s quicker than Cameron and will start from second ahead of the #6 ARX-05 that will be co-driven by Juan-Pablo Montoya and Simon Pagenaud.

The defending Sebring 12 Hour winner is nine points off the championship lead, with regular co-driver Felipe Nasr unable to win the title having missed the second Daytona race due to a positive coronavirus test.

Oliver Jarvis will line up seventh in the second Mazda ahead of JDC Miller's Matheus Leist. 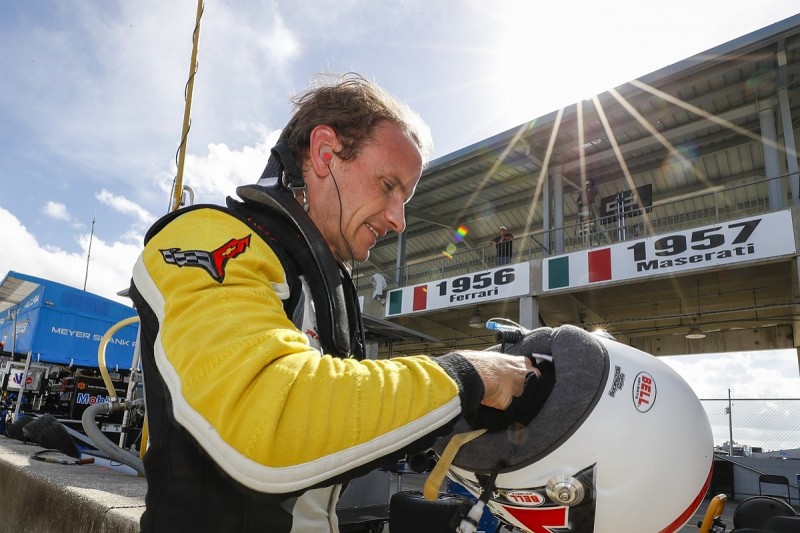 In GTLM, Antonio Garcia took pole by a convincing margin in the #3 Corvette C8.R he'll share with Jordan Taylor and Nicky Catsburg.

The practice sessions had been dominated by the Porsche 911 RSRs on the Weissach marque's final appearance as a factory team in IMSA, only for Nick Tandy and series returnee Neel Jani to qualify fifth and sixth.

His closest challenger, Andrew Davis in the Hardpoint Racing Audi R8, was over half a second slower, with Aaron Telitz third in the #14 AIM Vasser Sullivan Lexus RC F.

The championship-leading #86 Meyer Shank Racing Acura NSX of Mario Farnbacher and Matt McMurry will start eighth after a disappointing qualifying for Shinya Michimi.