Jarvis signed a deal with United Autosports for the 2023 World Endurance Championship that precluded him from defending the IMSA title he won with Blomqvist this season, due to two clashes between the respective calendars.

Several drivers were in the running to replace Jarvis, with Braun among five that were under consideration for the seat as IMSA adopts LMDh regulations.

In signing Braun, the team will reunite with a driver that it previously worked with at the 2009 Daytona 24 Hours, racing a Riley-Ford Daytona Prototype with Ryan Hunter-Reay, Oswaldo Negri and Mark Patterson. In 2013, with MSR he logged a record 222.971mph lap at Daytona.

Braun’s diverse career has been highlighted by success in sportscars, with two Daytona 24 Hours class wins and a further three at the Sebring 12 Hours.

The American 34-year-old scored the most recent of his three class championships with CORE autosport in the LMP3 class this year.

Braun and Blomqvist will be joined in the #60 Acura by MSR’s IndyCar drivers Helio Castroneves and Simon Pagenaud in the Daytona season-opener, while Castroneves will continue as the extra driver for the remaining trio of endurance events.

“I am incredibly excited to be joining Meyer Shank Racing for the 2023 season,” said Braun.

“MSR were tough competitors back in my Grand-Am days and setting the Daytona speed record with them was really special.

“Seeing what Mike (Shank) has built from the outside has always been impressive. You can see the passion the entire team has for racing and their drive to win is really motivating. 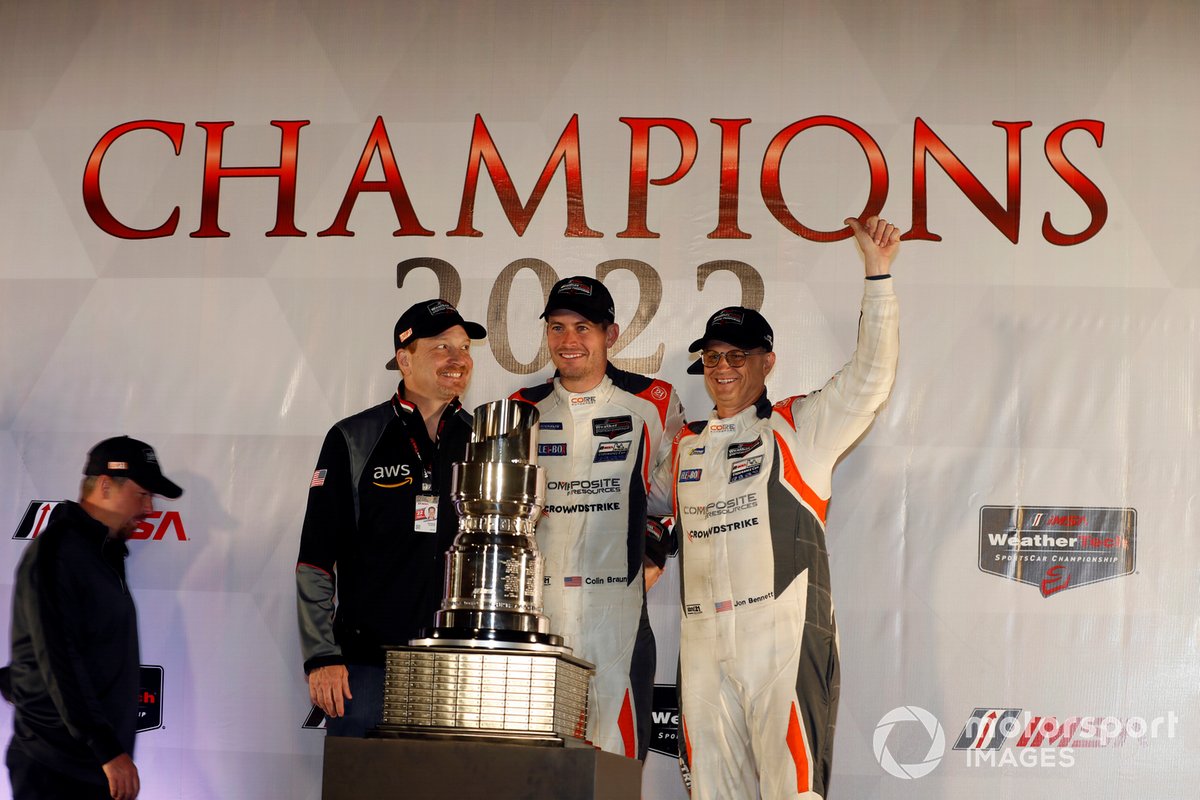 Braun (middle) won the LMP3 title this year with Core founder Jon Bennett right), who has retired from driving and closed the team down

“MSR had a terrific season in 2022 and I know expectations are high to deliver, but I am ready for the challenge.

“I’m also looking forward to co-driving with Tom. His experience on the electric side of racing [in Formula E with NIO 333] will be a huge boost for us.

“I am ready to get to work and to once again compete in IMSA’s top class for wins and championships in the Acura GTP car!”

Team founder and co-owner Mike Shank said: “Colin came out and tested for us and I think we all knew he would adjust well with the amount of experience he has.

“We were lucky enough to work together a while back at the Daytona 24 and we set a speed record at Daytona together as well, so we knew he would be a good fit.

“Him and Tom got along great and we have a solid lineup going into the 2023 season.”