With 2hr40 to go, Acura Team Penske's #6 car in the hands of Juan Pablo Montoya held a 4.7 second lead over Action Express Racing's Pipo Derani, with Olivier Pla and Ryan Hunter-Reay third and fourth in the Mazdas, with the JDC-Miller Cadillacs of Loic Duval and Matheus Leist in fifth and sixth.

However, the Mazda drivers were about to get an unexpected bonus as 10 minutes later, Derani was on Montoya's tail. He attempted to pass at Turn 10, but ran wide, nudged on to the grass by Montoya on corner exit.

Derani retaliated at Turn 5 in a doomed attempt at a pass. He spun Montoya off and down to fourth, while incurring both a drive-through penalty and losing three laps getting damage repaired.

That left the Mazdas running 1-2, Pla in the #77 gradually pulling away from the #55 car now driven by Jonathan Bomarito who, with 90 minutes to go, was coming under intense pressure from Duval.

Then Pla pitted from the lead with 80 minutes remaining to hand off to Oliver Jarvis, while Duval pitted the #5 JDC-Miller car and gave up his seat to Sebastian Bourdais.

Bomarito stopped next time by to give the #55 over to Harry Tincknell, with Montoya giving up the #6 Acura ARX-05 to Dane Cameron. That Acura moved into a podium position.

Cruising to victory 25s ahead of the sister Mazda, Jarvis suffered a left-rear puncture and ran off the road at Turn 10. Then, as he drove the #77 back to the pits, the tyre let go, sending bodywork spraying down the back straight and caused the first full-course caution for almost three hours. 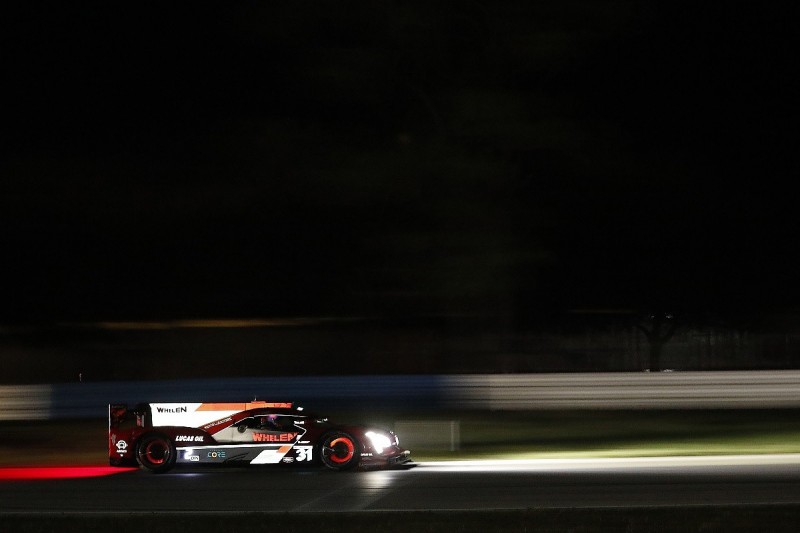 That left Tincknell in the lead ahead of Cameron, Jarvis, Stephen Simpson in the #85 JDC-Miller car and Bourdais. Following the final restart with 17mins to go, Cameron and Jarvis had a fantastic duel for second place, nine seconds behind Tincknell, until with two laps to go Cameron consolidated his advantage and finished second.

The bigger celebration for the team was that, seven laps down, Ricky Taylor and Helio Castroneves - with Alexander Rossi's adept assistance - clinched Acura Team Penske's second straight title despite its lengthy delay in the first hour.

Its main title challenger, the Wayne Taylor Racing Cadillac of Renger van der Zande, Ryan Briscoe and Scott Dixon, was unable to make up the laps it lost following contact with Jarvis that required repairs to the right-rear corner and finished seventh.

In the GT Le Mans class, despite minor strife at the end of the third quarter where both cars dropped back, Porsche surged back to the front of the pack to sign off from IMSA with a 1-2 finish headed by the #911 of Nick Tandy, Fred Makowiecki and Earl Bamber.

But both the #912 Porsche driven by Bamber (pulling double-duty across both cars) and Makowiecki in the #911 were keeping Porsche very much in play in the marque's final IMSA GTLM race.

The #24 BMW had, unfortunately, suffered brake issues that cost the crew a lap, dropping them to fourth.

Tandy took over the #911 for the final two stints, and after his last pit stop with 40mins to go, Connor De Phillippi was left with a nine second lead in the #25 BMW M8 that he shared with Colton Herta and Bruno Spengler. 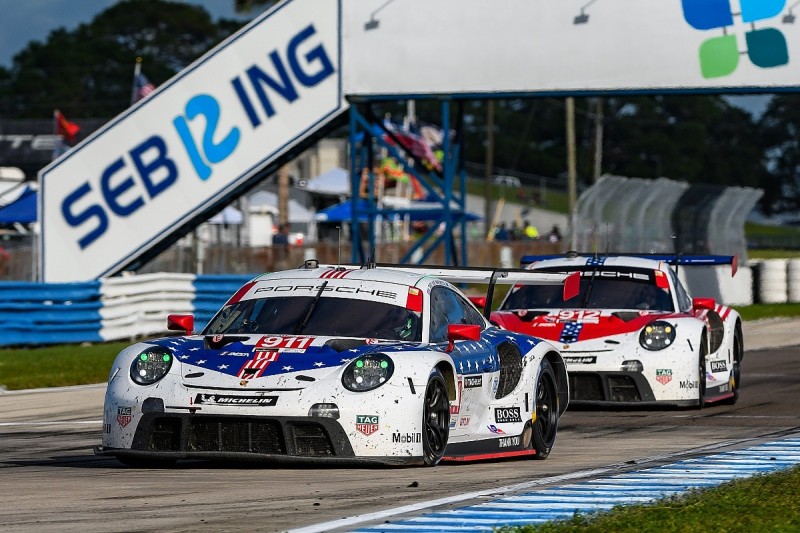 The Mazda-caused yellow brought Tandy and Bamber back within striking distance, but they did not need to do anything as GTD driver Lawson Aschenbach did it for them, trying to follow de Phillippi through past the GTD leader. He missed his braking point and sent the BMW off the track, so that the M8 had to pit for puncture repair.

Thus Tandy and Bamber were left running first and second, a lap ahead of Krohn, and signed off Porsche's GTLM venture in perfect style.

With around two hours to go, Matt McMurry's championship-leading Meyer Shank Racing Acura NSX ceded the lead of the class to Westphal's team-mate Alessandro Balzan in their Ferrari 488, then Long's Porsche 911 GT3R.

Long stopped with less than two hours remaining to hand over to Jan Heylen. The Belgian then whittled his deficit to Balzan until he was less than 1s behind with 80 minutes to go.

A dozen seconds back, Mario Farnbacher had taken over the MSR Acura from McMurry and was trying to wrest third place away from Roman de Angelis's Heart of Racing Aston Martin Vantage, but both were demoted by Aschenbach through the next stint.

Balzan had extended his lead over Heylen to 4sec by the time they both pitted with 55 minutes to go - along with third-placed Aschenbach - and when they emerged, Westphal took over the Ferrari and held a gap of 11s over Long, who quickly gave up second to the charging Mercedes.

Following the final restart, however, Aschenbach tried to follow the GTLM-leading BMW past Westphal but instead hit the back of the #25 M8 and sent it into Westphal's Ferrari and off the track.

Aschenbach received a drive-through penalty, but had terminal damage on the Mercedes.

Long thus took a first victory of the year, but with the #86 MSR Acura of Farnbacher, McMurry and Shinya Michimi taking third, it was it was not enough to prevent Farnbacher and McMurry from taking the title.