Having secured the lead in the early morning thanks to a charge from Rossi, who dispatched Kevin Magnussen in the #01 Ganassi Cadillac, the WTR team barely looked back and secured its first victory running the Acura ARX-05 DPi car.

It lost the lead in the pitlane to the #60 Meyer Shank Racing team during a yellow flag period, following a puncture for Scott Dixon with less than 2h30m on the clock, but Taylor managed to dive down the inside of MSR's Dane Cameron to reclaim control of the race.

Dixon emerged from the pits down in fifth, and then stopped again under the yellow - along with all the other Prototypes - to fit the other three fresh tyres and to be replaced in the cockpit by Renger van der Zande.

Mazda's Oliver Jarvis and AXR's Kamui Kobayashi followed Taylor through half a lap later. The Acura, Mazda and Cadillac kept pulling away from Cameron - and covered only by 1.5s - when the 12th caution flew for debris on the track.

The first three maintained position on the restart, but van der Zande moved the Ganassi Cadillac past Cameron's MSR Acura into fourth.

In the next round of stops, Ganassi got van der Zande out ahead of Kobayashi and Harry Tincknell, who had taken the reins in the #55 Mazda, and began to get onto the tail of WTR's Albuquerque.

Tincknell then started applying the pressure to the Ganassi Cadillac, and duly snagged second with 80 minutes on the clock - and started trying to close the 3s deficit to Albuquerque.

WTR Acura's lead remained intact and pitted simultaneously with Mazda with 55 minutes to go, emerging with 5s between them, but both had been jumped by the earlier stopping Cadillacs of van der Zande and Kobayashi.

Diving past Tincknell for second on warmer tyres, van der Zande was still five seconds behind leader Albuquerque - a gap he immediately scythed away at.

With 15mins to go, he cut WTR Acura's lead down to a slither - but with six minutes to go, another right-rear puncture sent van der Zande limping to the pits, eventually to emerge in fifth.

Kobayashi had gained a second wind in the final stint and passed Tincknell for second place, and while the Mazda driver fought back, he came up 1.8s short.

In LMP2, Era Motorsport beat the Tower Motorsport by Starworks team, thanks to a last minute splash-and-dash for Gabriel Aubry. 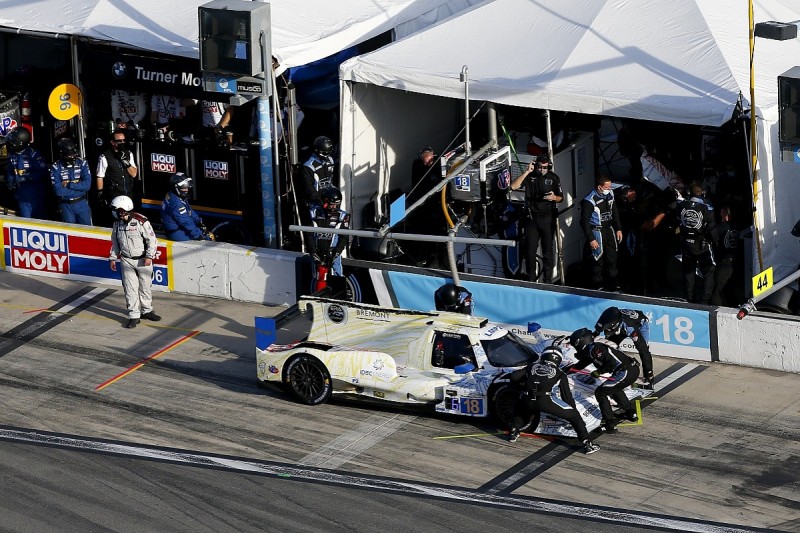 Ryan Dalziel held the lead for the Era squad in the final three hours by just 5s over Matthieu Vaxiviere in the Tower Motorsport car, but pitted at the 12th restart to allow Vaxiviere into the lead.

Vaxiviere was handed a drive-through penalty for jumping the restart, which halved Era Motorsport's deficit to 45s, and Dalziel went back into the lead when Vaxiviere stopped with 1h24m to go to hand over to Gabriel Aubry.

Aubry regained the lead when Dalziel handed the Era car to Paul-Loup Chatin, but the former's late stop thrust Chatin back into the lead to secure LMP2 honours.

Catsburg struggled to get the #3 Corvette moving during the caution-instigated pitstops, handing the class lead to Sims and dropping to fourth behind Alessandro Pier Guidi in the Risi Ferrari 488 and Augusto Farfus who had taken over the #24 BMW.

The Dutchman's day went from bad to worse as the car was assisted while outside its pitbox and thus he served a drive-through penalty. 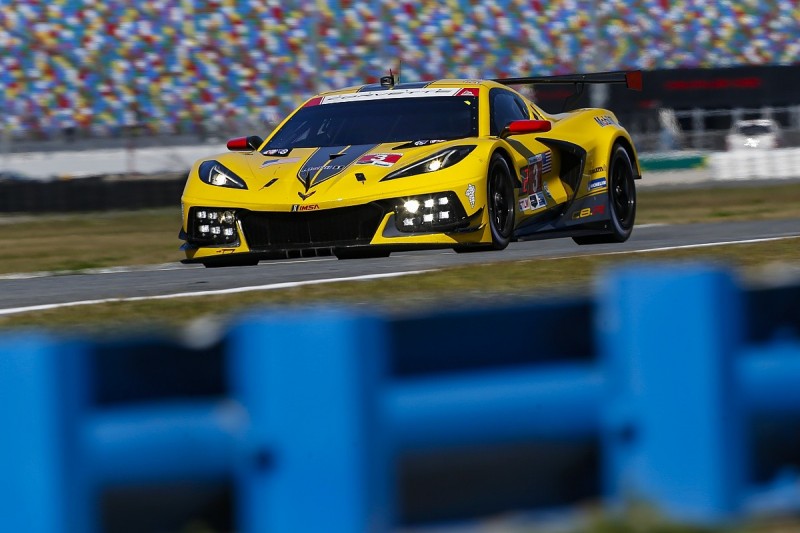 Although Farfus took the lead on the following caution restart from Sims, the British driver reclaimed it before handing over to Milner for the final stint.

But the #4 dropped behind the #3, as the latter had stopped earlier to swap Catsburg for Taylor and secured a fresh tyre advantage - although the duo had dropped behind Farfus.

Taylor drafted around the outside of Farfus' M8 along the pit straight with just over an hour left, with the pair of them 6s ahead of Milner who was 38s up on the Risi Ferrari.

Milner then had a far shorter final stop than Taylor and Farfus and moved the #4 car ahead, as the Corvette pair battled for second - behind the off-sequence Ferrari - with less than 40 minutes to go.

Taylor got ahead as Pier Guidi made his final stop with 20 minutes left - Taylor with a 1.5s lead over Milner who in turn had nine seconds over Farfus.

Winward Racing and SunEnergy1 scored a 1-2 for the Mercedes-Benz AMG GT3 in the GT Daytona class.

With three hours to go, the race had distilled into a Mercedes-Benz AMG GT3 fight between Maro Engel of Winward and Luca Stolz in the SunEnergy1 machine, with Engel edging away.

Winward Racing got Engel out swiftly when he made his final stop, and he commenced the 48min run to the flag with a 10s lead over the Sun Energy1 car of Marciello.

He in turn had 7s over the Paul Miller Racing Lamborghini of Caldarelli who now only had two seconds in hand over Jan Heylen of Wright Motorsports.

Over the final stint the four separated again, and Engel won the class by 16.3s over Marciello, with Caldarelli third, 10s ahead of the Wright Porsche.