Tristan Vautier in the JDC-Miller Motorsports Cadillac is leading the Daytona 24 Hours after three hours, while Corvette runs 1-2 in the GT Le Mans class

Polesitter Felipe Nasr took his #31 Action Express Racing Cadillac into the lead at the start of the race, holding off Loic Duval in the JDC Miller Motorsports example and extended a 3.4s lead by the time Dane Cameron took over second place in the Meyer Shank Racing Acura ARX-05 on lap 4.

But following a caution period to recover debris from the WeatherTech Racing Porsche that was rear-ended by Bruno Spengler's BMW on their way to the green flag, Cameron slipped up and was shuffled down to fourth behind Duval and Renger van der Zande (Chip Ganassi Racing Cadillac), with Filipe Albuquerque (Wayne Taylor Racing Acura) and Jimmie Johnson (AXR Cadillac) just behind.

Following a half-hour under caution caused by LMP2 driver Rob Hodes crashing the #81 DragonSpeed ORECA-07 Gibson at Turn 1 and getting stuck at the Bus Stop chicane on his way back to the pits, van der Zande wasted little time in moving to the lead before the third FCY flew when Frits van Eerd crashed the Racing Team Netherlands ORECA LMP2 at the Bus Stop.

During subsequent pitstops under caution, Vautier took over the JDC Miller Cadillac and snatched the lead ahead of Ricky Taylor, now in the WTR Acura.

Ex-Formula 1 driver Kevin Magnussen was third after taking over from van der Zande, with Olivier Pla fourth for Meyer Shank ahead of Pagenaud and Harry Tincknell in the sole Mazda RT24-P that was unable to select first gear before the start and had to start from the rear of the grid.

NASCAR Cup champion Chase Elliott took over the #31 AXR Cadillac from Nasr when the pits were closed and had dropped to the rear of the DPi field.

The battle for the LMP3 lead thinned quickly after a tangle in the first hour between the Duqueine machines of Moritz Krantz (Muehlner Motorsports) and Ryan Norman (Forty7) at the International Horseshoe brought both to the pits for repairs.

Rasmus Lindh of Performance Tech Motorsports then led, but shortly after handing over to Cassels, the 52-year-old Canadian was hit by an over-optimistic Calado and also had to visit the garage area.

That left a Ligier 1-2-3 with Wayne Boyd leading in the patriotically-liveried Sean Creech Motorsports machine ahead of Gar Robinson's #74 Riley entry and George Kurntz of CORE autosport. 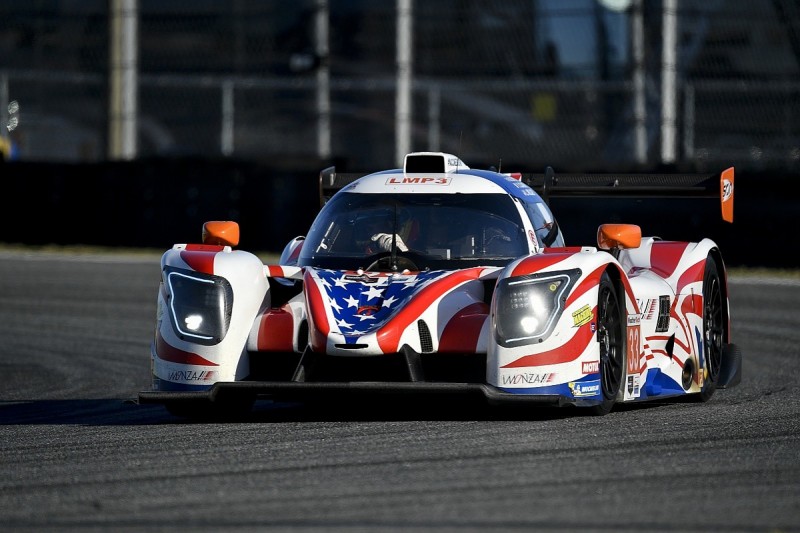 Calado's drive-through penalty and subsequent contact with Ted Giovanis in the Team TGM Porsche dropped him to fifth in GTLM at the end of the third hour, as the two Corvettes headed the two BMWs.

Nick Tandy took over the leading #3 C8.R from Tommy Milner - who had electrical problems in the first stint and fell to fourth - with Jordan Taylor in the #4 car behind him, with Jesse Krohn third and Philipp Eng fourth in the #25 car that served a drive-through penalty for Spengler's earlier indiscretion.

Meanwhile the GTD lead was held by Kyle Kirkwood in the #14 Vasser Sullivan Lexus RC F ahead of Darren Turner's Heart of Racing Aston Martin.

The sister #12 Lexus started by Frankie Montecalvo led at the end of the first hour, but lost two laps while having its IMSA transponder replaced.