Meyer Shank Racing and Wayne Taylor Racing ensured another Acura 1-2 in third practice for the Roar Before the 24 at the Daytona 24 Hours, but the fastest Porsche was less than 0.15s off.

Chip Ganassi Racing’s Cadillacs were the first cars to show their hand in GTP, with Sebastien Bourdais #01 and Alex Lynn (2) ducking into the 1m35s with their third laps, but then Tom Blomqvist sent the Meyer Shank Racing Acura ARX-06 to the top with a 1m35.363s lap of the 3.56-mile Daytona International Speedway.

Then the #6 Porsche 963, which had sat idle for most of Friday’s second session, sprung into second with Nick Tandy at the wheel before pitting. Then moving up to split the Ganassi cars was Pipo Derani in the Action Express Racing Cadillac.

Just before the half-hour completed mark, Tandy re-emerged and halved his deficit to Blomqvist to 0.135s.

The Acura of Wayne Taylor Racing didn’t hit the track until halfway through the session, Louis Deletraz turning the car’s first laps of the day, albeit 2s off Blomqvist’s pace.

Felipe Nasr made it a Porsche 2-3, getting the #7 Penske-run machine into third, one-tenth behind Tandy, before Deletraz found a clear track to display his potential, jumping both Porsches to complete an Acura 1-2.

With 25 minutes remaining, Bourdais whittled his Cadillac’s deficit to the lead Acura down to 0.36s before pitting.

Nicolas Lapierre sat atop the LMP2 times in his PR1 Mathiasen Motorsports entry early on ahead of the AF Corse car piloted by Nicklas Nielsen, who then improved to a 1m39.382s. 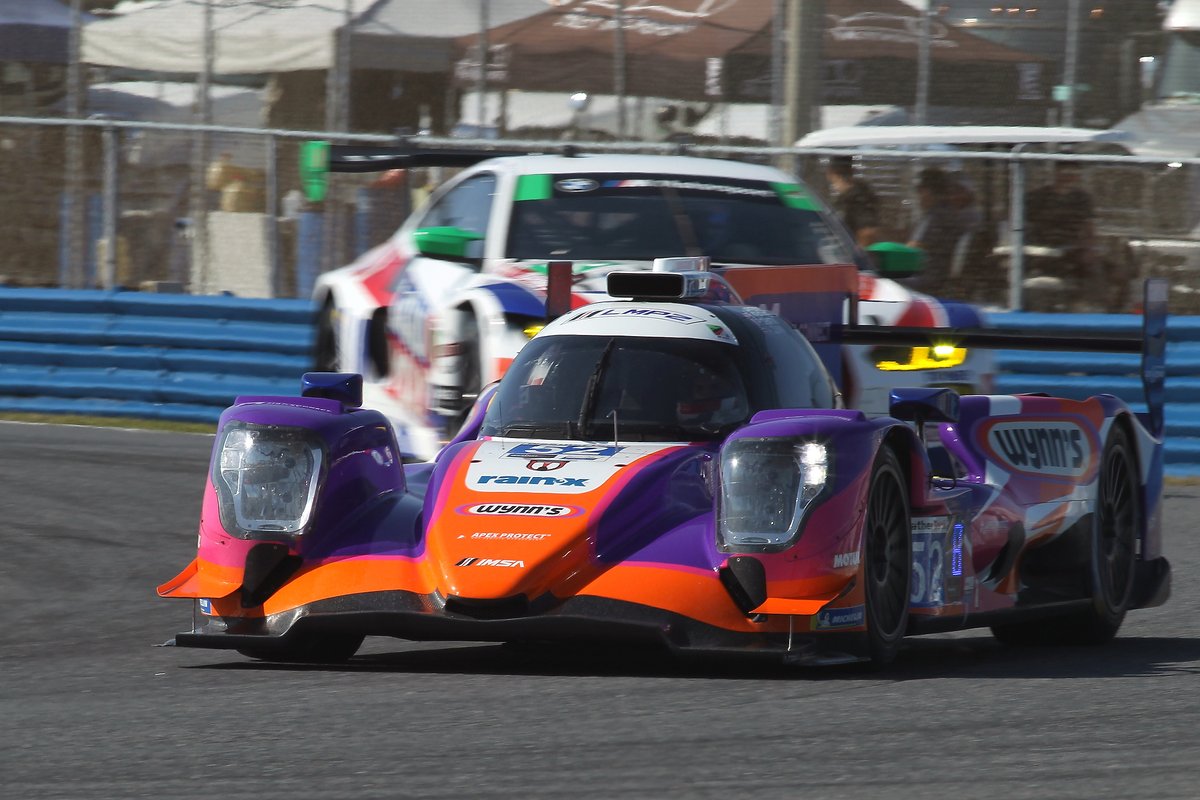 Then Lapierre ducked into the 1m38s, half a second clear, before Mikkel Jensen neatly bisected that gap in the #11 TDS Racing car.

Fred Poordad brought out the red flag with 54mins to go when he had a sudden tire deflation in the Proton Competition entry, dropping debris at Turn 5 and then pulling off in Turn 7.

In LMP3, AWA’s Matthew Bell was the pacesetter in the early part of the session, producing a 1m43.266s lap to run two-tenths quicker than John DeAngelis in the Performance Tech Motorsports machine, although Dakota Dickerson split this pair with the Andretti Autosport car.

Lars Kern spun the AWA car and suffered minor damage, but was able to continue without causing a red flag. With 22 minutes remaining in the session, Dickerson moved to the top of the times by shaving a mere 0.069s from Bell’s benchmark, but 10 minutes later he thumped in a 1m42.653s, leaving the Andretti car over six-tenths clear of his nearest rival, which was still Bell.

Owen Trinkler of TGM/TF Sport and Ross Gunn in the Heart of Racing car continued to ensure Aston Martin remained prominent, one tenth ahead of the two Vasser Sullivan Lexus RC Fs – Kyle Kirkwood in the GTD car being one thousandth faster than Mike Conway in the GTD Pro entry.

Then Frederik Schandorff vaulted the McLaren 720S to the top of the times to go 0.6s clear. Kenton Koch became his nearest rival with the Team Korthoff Motorsports Mercedes AMG GT3, but he was still half a second adrift.

Then with just a few minutes to go, Spencer Pumpelly wound up the Magnus Racing Aston Martin to make it a Vantage 3-4-5 across the two GTD classes, and demote the Lexus RC Fs.

The Porsche 911 GT3 Rs appear in desperate need of help from IMSA’s Balance of Performance gurus, propping up the field in the bottom six positions and over two seconds off the pace.