Derani and Taylor came to blows with 10 minutes remaining of the 10-hour IMSA SportsCar Championship race as Taylor tried to find a way back past Derani at Turn 6 following the Brazilian's pass to take the lead at Turn 1 earlier in the final stint.

But contact between the cars left Derani in the gravel, and allowed the Wayne Taylor Racing Cadillac of Renger van der Zande, Ryan Briscoe and Scott Dixon, which had been running third, to sneak through for victory.

The Acura ARX-05 shared by Taylor, Helio Castroneves and Alexander Rossi ended up second and the AXR Cadillac DPi-V.R of Derani, Felipe Nasr and Filipe Albuquerque was finally classified fifth and two laps down.

Post-race, Derani was caught on camera in a heated discussion with both Taylor and Castroneves, and the 27-year-old said he was unhappy about being "accused of doing something wrong" in the incident - describing Taylor's move as "desperate".

"I told him I always had a lot of respect for him," said Derani of his conversation with Taylor.

"I was in the lead, I was out in front and he pushed me out - that's it, there's not much to say.

"Unfortunately, we lost the race. We did everything we could with 10 laps to go.

"We were leading the race and he just pushed me out on a desperate move to try to go to the lead - it was a mistake on his side.

"I hope he sleeps on it and thinks a little bit because he thinks it's my fault -I don't know what I could have done differently. 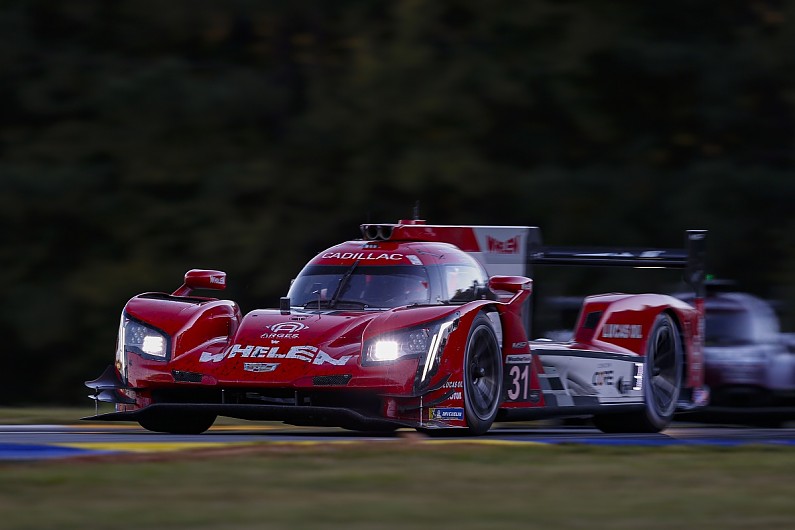 "We'll take the positives out of this race, we had a fantastic race.

"Acura was much quicker than us but we were there at the end leading the race.

"I put two fantastic passes on him after losing the lead on the pitstop again.

"We did everything we could [to win] - everyone on the Whelen Engineering car did a fantastic job.

"I lost a little bit of respect for him [Taylor] and his team-mates for trying to accuse me of doing something wrong.

"But, it is what it is - I'm not at the racetrack to make friends. I want to win the next one."

For his part, Taylor said he "hated" how the battle between himself and Derani concluded, while claiming he "saw an opportunity" to retake the lead.

"I have to thank everyone at Acura and Team Penske for the speed they brought this weekend to Petit Le Mans," said Taylor.

"We showed all weekend that we were going to be tough to beat, and it played out that way in the race.

"It's Petit Le Mans - everyone wants to win this race and I saw an opportunity to do that for my team.

"To come home second is a solid points day, but we were the car to beat at the end and I'm bummed that we didn't end on top of the podium."