Polesitter Castroneves had dropped off the lead lap after serving two penalties in the opening hour, a drive-through for speeding in the pitlane and a 60-second stop-go for passing a red light on the pitlane exit.

But the #7 Acura made it back onto the lead lap after half-distance and after brake problems forced Tristan Nunez to retire the race-leading #77 Mazda he shared with Oliver Jarvis and Olivier Pla, Taylor retook the lead the car from team-mate Dane Cameron through traffic in the final 90 minutes.

Reigning champion Cameron, who had spun down to last at the start following contact with Felipe Nasr's Action Express Racing Cadillac, gave chase but co-driver Juan-Pablo Montoya couldn't keep up the pressure and had dropped to third behind Harry Tincknell's #55 Mazda entering the final half an hour when he and the following Wayne Taylor Racing Cadillac of Ryan Briscoe pitted together.

The two cars made contact, Briscoe nosing into the back of Montoya with enough force that the #6 Acura's rear bodywork had to be changed and resulting in Briscoe copping a penalty, much to the team's frustration.

Montoya rejoined in fourth and was challenging Tristan Vautier's JDC Miller Motorsport Cadillac when he tangled with Toni Vilander's Ferrari 488 and crashed heavily at the Esses to bring out a caution that set up the grandstand finish.

Castroneves duly held off Tincknell, who shared the #77 Multimatic-run Mazda with Jonathan Bomarito and IndyCar racer Ryan Hunter-Reay, in a two-lap dash to the finish to score his and Taylor's second successive victory, becoming the first repeat winner in the Prototype category this season.

In the car he shared with Pipo Derani and Filipe Albuquerque, Nasr completed the podium ahead of Vautier and Briscoe despite also serving two penalties for the contact with Cameron and Derani shunting Spencer Pumpelly's Magnus Lamborghini into the wall. 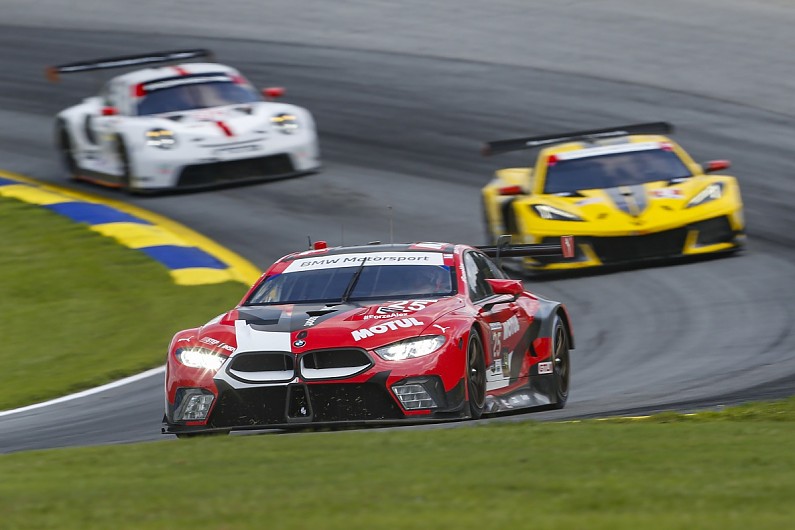 Following a run of four straight victories for the new Corvette C8.R, De Phillippi and DTM convert Spengler took their first win of the year for Team RLL as polesitter Tandy dropped down to fourth in the closing stages.

Farnbacher controlled the race after taking the lead in the second-to-last round of pitstops following a caution for Pumpelly's crash.

The Paul Miller Racing Lamborghini that had led much of the first half of the race in the hands of Madison Snow, Bryan Sellers and Corey Lewis slipped to fourth at one stage before fighting back to second, while Patrick Long, Ryan Hardwick and Jan Heylen completed the podium in the Wright Motorsports Porsche.