One-time Daytona 24 Hours winner Pipo Derani believes this weekend's shorter second round of the IMSA SportsCar Championship at the same venue will require "a completely different approach" to win.

The two-hours and 40 minute event, which will be held in front of a limited number of spectators, will be the first time an IMSA-sanctioned event has held a sprint event at Daytona in 11 years.

It follows the season-opening 24 Hours in January, in which the Renger Van Der Zande, Ryan Briscoe, Scott Dixon and Kamui Kobayashi-driven Wayne Taylor Racing Cadillac continued the GM manufacturer's unbroken run of success at the track since the DPi formula was introduced in 2017.

PLUS: Why one car was "too fast for everyone" at Daytona

Derani, who was part of the last Daytona-winning crew to not come from the Cadillac ranks when he helped steer the ESM Ligier-Honda to victory in 2016, finished seventh in the 24 Hours after delays in the Action Express Racing Cadillac he shared with regular co-driver Felipe Nasr, Mike Conway and Filipe Albuquerque.

The 2019 IMSA runner-up will resume his partnership with fellow Brazilian Nasr this weekend and said the shorter distance would completely change the dynamic of the race.

"We are going into this race with a completely different approach [to the 24 Hours] because it's a much shorter race, so I think the dynamics are going to be much different," Derani said.

"I think you're going to see the difference from boys to men, the teams that are really serious and have a protocol on how they will get up to speed quicker.

"Our team, Whelen Engineering/Action Express, we've been doing it for so long with the same group of guys and the teams that have been together for a while know what to do and [will] have the edge." 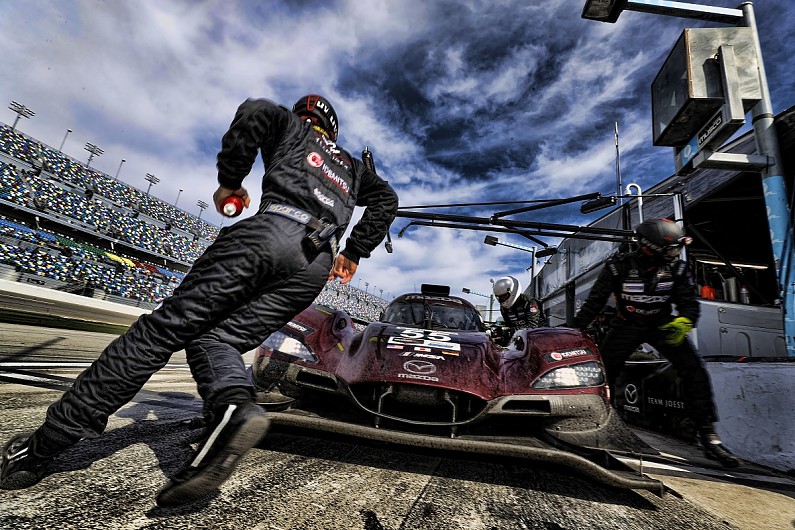 Mazda's hopes could be decided by BoP

Harry Tincknell believes that the Mazda's chances of challenging for the title could be stronger now that certain street races have been removed from the revised calendar - but reckons that Balance of Performance will be an even important factor.

Both the Long Beach and Detroit races have been dropped from the schedule due to the COVID-19 situation, which would favour the Multimatic-run Mazda RT24-Ps given Cadillac's traditional pre-eminence on street courses.

However, Tincknell believes the new order of the races - and the subsequent application of BoP - has at least as much influence over their championship hopes.

"The BoP is reactive a little bit to the tracks that we go to and what order they're in," he said.

"Actually having two street tracks fairly close together, which probably suits the Cadillac really well, if they then perform well and have a BoP hit for say, Road America, they could end up looking like the car doesn't suit the track as much as it might do if the order of the tracks had been the other way around."