The factory Aston Martin Racing squad will field a car at the 2020 Daytona 24 Hours for the first time since '17.

AMR will run a GT Daytona class Aston Martin Vantage GT3 in the opening round of the IMSA SportsCar Championship on January 25-26 for Paul Dalla Lana, who will drive together with current team-mate Ross Gunn and former co-drivers Pedro Lamy and Mathias Lauda.

Dalla Lana, Lamy and Lauda made AMR's last start at Daytona in 2017 together with Marco Sorensen.

AMR team principal John Gaw told Autosport said: "Paul and I have been pushing each other to do it, because we feel we have unfinished business at Daytona.

Gaw also revealed that AMR will also be placing a factory driver with the new Heart of Racing squad, which will contest the full IMSA series with a new Vantage GT3, for the Daytona endurance event.

Expat Briton Ian James, who has helped set up the team, and Alex Riberas are expected to be among the drivers. 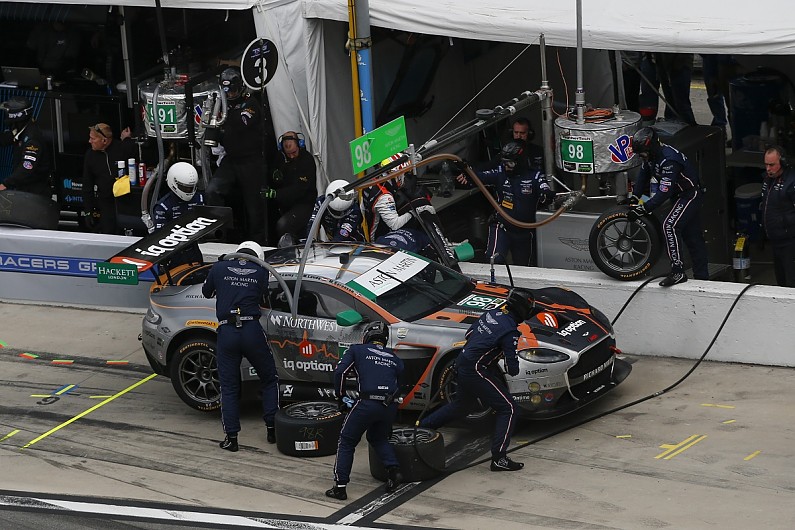 Gaw also stated that AMR hasn't given up on his ambition to enter IMSA's GT Le Mans class with the Vantage GTE.

"We'd love to be there in North America, because it is a big market for us," he said. "It's a question of finding the right sponsor or partner."

British GT Championship class title winner Tom Canning will get behind the wheel of an Aston Martin GTE car the first time during the World Endurance Championship rookie test in Bahrain on Sunday.

The 17-year-old has been given the chance to drive a Vantage GTE after winning the Aston Martin Racing Driver Academy scheme last month.

Canning will be stepping up from the Vantage GT4 he raced in British GT after conducting only one short test in a GT3 Aston.

Gaw said: "It's a big step up for Tom, but there's no pressure on him.

"We did the same with Ross [Gunn] and Jamie [Chadwick] in 2015: we threw them straight in a GTE car and they both went on to get factory contracts."

"It will be good experience for me and doing it the day after the WEC race is the best possible way to do it."

Gabriel Aubry, who races for the Jota-run Jackie Chan DC Racing LMP2 squad in the WEC, will test a Vantage GTE in Bahrain on Sunday.

The Frenchman explained that he is looking to the GT ranks to try and forge a relationship with a manufacturer in a bid to become a paid professional.

Aston Martin junior Andrew Watson, who drives the Gulf Racing Porsche in GTE Am in the WEC, will get his first taste of the Vantage GTE.

Lasse Sorensen, brother of AMR driver Marco and a frontrunner in the NASCAR Euro Series, will also test for Aston.