Fernando Alonso says he wanted the rain-soaked Daytona 24 Hours to be stopped several laps before it finally was, even though he was running second at the time.

The two-time Formula 1 champion was instrumental in securing victory for the #10 Wayne Taylor Racing Cadillac he shared with Renger van der Zande, Jordan Taylor and Kamui Kobayashi, starring in wet conditions that characterised the final part of the race.

Alonso pulled out a lead of 55 seconds in the early hours of the morning before the race was red-flagged a first time, and had just retaken the lead from the Action Express Cadillac of Felipe Nasr when the race was halted for a second time with a little under two hours left on the clock, as Nasr went wide at Turn 1.

Speaking after the race, Alonso said the worsening conditions in the run-up to the second stoppage were such that he was calling for the race to be neutralised before he passed Nasr.

"I called a lot of times, when I was second, over the radio that a safety car was necessary," said Alonso.

"The last five, seven laps of the race were not right, for anyone on track.

"The visibility was nearly zero, we could not be flat-out on the straights, the car was moving, the TC [traction control] was coming in sixth gear at 200mph, [and] there were parts of different cars in different parts of the track, because people were losing bodywork here and there.

"I was calling the team for a safety car immediately because I could not see anything. Felipe went a little bit long into Turn 1, we took the lead. We were just lucky in that moment.

"I think conditions were OK to stop the race seven laps before we did, and at that moment we were second."

Alonso and Taylor drove for around seven hours each, with Alonso returning to the wheel for a third time ahead of the crucial final stages. 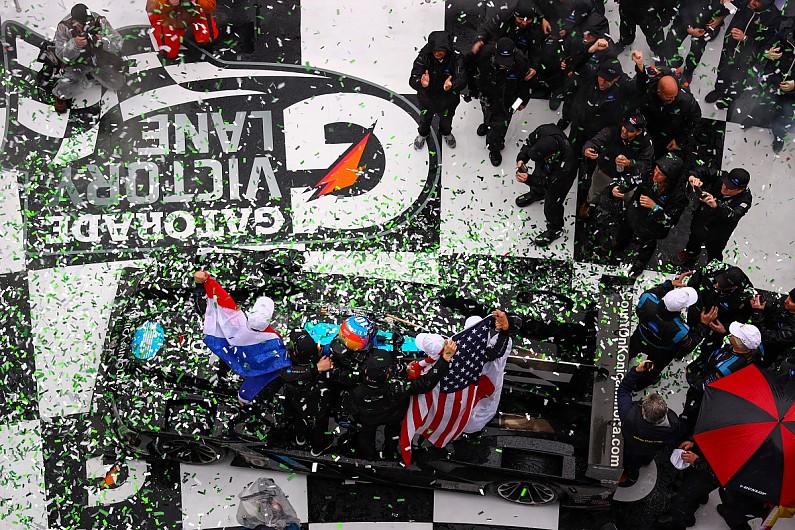 Taylor said the decision to put Alonso back in the car was made by all four WTR drivers and was based on his earlier experience of the track conditions.

"We knew it would be wet at the end, and Fernando was the only one that had driven in the wet," Taylor explained.

"So it was about the timing of how to get him back with the four-hour [rule] - you can only drive four hours in every six.

"It was just up to the team and us [drivers] to talk about it to see who was most comfortable and confident.

"Fernando was the one that drove into the wet conditions and was most comfortable and confident already, so we made that call with six or seven hours to go."