It marks Cadillac's first victory at the famous 10-hour Road Atlanta endurance race, and two members of its #31 crew, Felipe Nasr and Eric Curran, took the overall championship despite finishing down in eighth place.

The #7 Action Express Racing Cadillac driven by Filipe Albuquerque, Christian Fittipaldi and Tristan Vautier were leading a one-two before falling from first to fourth after running out of fuel.

Albuquerque had wrestled the lead from the polesitting Extreme Speed Motorsports Nissan in the hands of Pipo Derani, with a bold move down the inside of the entrance to the chicane, just under 30 minutes before the chequered flag.

Derani and his co-drivers Timo Bernhard and Johannes van Overbeek suffered an early setback, dropping out of the lead and losing nearly a minute due to a rear-left puncture just 25 minutes into the race.

With the aid of multiple full-course yellows and safety cars, they hurled their way back into the race lead.

Derani was one of the first prototypes to make his final pitstop, but stalled in the pits and went off through the grass on his out-lap, dropping him into the clutches of the Cadillacs.

Van der Zande passed Derani with a stunning move at the final corner, with just over five minutes of the race left.

He took the chequered flag 5.306 seconds ahead of the #77 Mazda RT24-P, which featured ex-Audi World Endurance Championship drivers Lucas di Grassi and Oliver Jarvis as well as Tristan Nunez.

IndyCar driver Spencer Pigot made it two Mazdas in the top three along with his team-mates Jonathan Bomarito and Marino Franchitti.

Albuquerque ended up in fourth place ahead of the #7 Acura, which briefly ran second before Helio Castroneves overtook under yellows and earned a drivethrough penalty.

Derani's #22 Nissan finished in sixth after a late pitstop ahead of the two championship rivals.

Jon Bennett and Colin Braun struggled to maintain their late-season charge, ending the race in seventh and struggling for pace throughout the race. 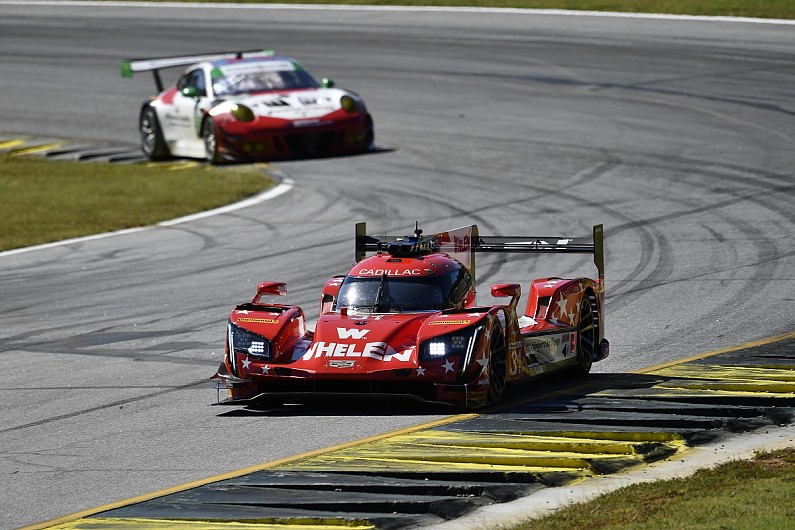 Nasr and Curran (above) also struggled, with the former's lap times seriously suffering in the final hour due to an ambitious fuel strategy.

They finished one place behind their rivals in seventh place, which was enough to secure the title.

Incredibly Antonio Garcia and Jan Magnussen sealed the GT Le Mans crown despite Garcia spinning the #3 Corvette into the wall on cold tyres.

The car was repaired and they, along with Marcel Fassler finished in eighth, while their championship rivals in the #67 Ford GT could only manage fifth due to a sloppy end to the race.

Nick Tandy took the class victory, aboard the #911 Porsche, which he shares with Patrick Pilet and Frederic Makowiecki.

Impressively, he stopped earlier than his rivals but took GTLM honours by over 11s.

The battle for the GT Daytona title was equally intense, with Bryan Sellers and Madison Snow denying Katherine Legge despite a hard-fought race from Legge and her team-mates Alvaro Parente and Trent Hindman.

Parente took second but Sellers finished just one place behind which was enough to seal the GTD title. 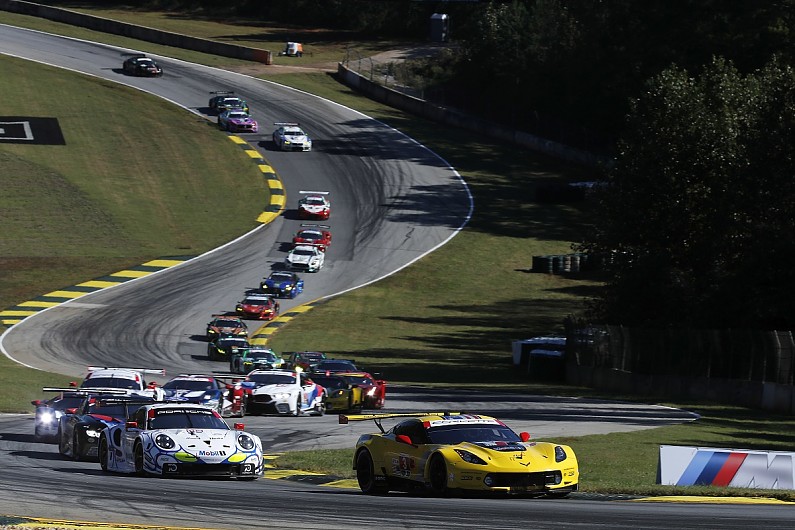