There are an almost infinite number of set-up combinations available to competitors in motorsport that can be tailored for track conditions, driver preferences and car characteristics. The exact same solution is unlikely to be found between two cars from the same one-make series, let alone between factory teams in international GT racing and an amateur racer making their start at grassroots level.

However, the process of establishing base set-ups is surprisingly similar, starting with accurate measurements of the camber, toe, corner weights and rideheight. And depending on how serious the club racer is, they can use the same equipment to set-up their Sports 2000 machine or Mazda MX-5 as a top GT3 customer racing outfit.

This was something considered impossible in past years as cars typically required bespoke set-up equipment – painstakingly pieced together from numerous suppliers – that couldn’t be transferred to other vehicles and had to be sold on when the car changed hands.

But that all changed with the advent of the CP Autosport SetupWizzard, developed by long-time Porsche Motorsport supplier, and licensed builder of FIA-standard halos, CP Tech GmbH. Its solution is widely employed by top teams across the world’s leading sportscar championships, as well as in single-seaters and touring car racing, with an array of adapters allowing the same equipment to be used across multiple cars.

“I have been using the CP Autosport SetupWizzard since 2018 with great satisfaction,” says Renaud Dufour, chief engineer for 2021 DTM title-winning squad Haupt Racing Team. “We are using our four systems in all championships we are involved in. The CP system is a very reliable, accurate, repeatable and especially time-efficient way to set up our cars in a high level of competition.”

Clearly, the insight needed to interpret feedback from the driver and make the correct set-up tweaks will have a bigger final impact on the outcome than the set-up equipment used to effect the changes. But, in an era where single-make series are rife and many other championships incorporate Balance of Performance, teams cannot afford to leave any performance on the table as a result of rushed or inaccurate measurements.

And according to experienced engineer Owen Hayes, formerly Porsche North America’s motorsport director, the SetupWizzard is an important foundation for all the detailed work that comes next and is more convenient for its users than “the hotch-potch of things that you buy from different people”. 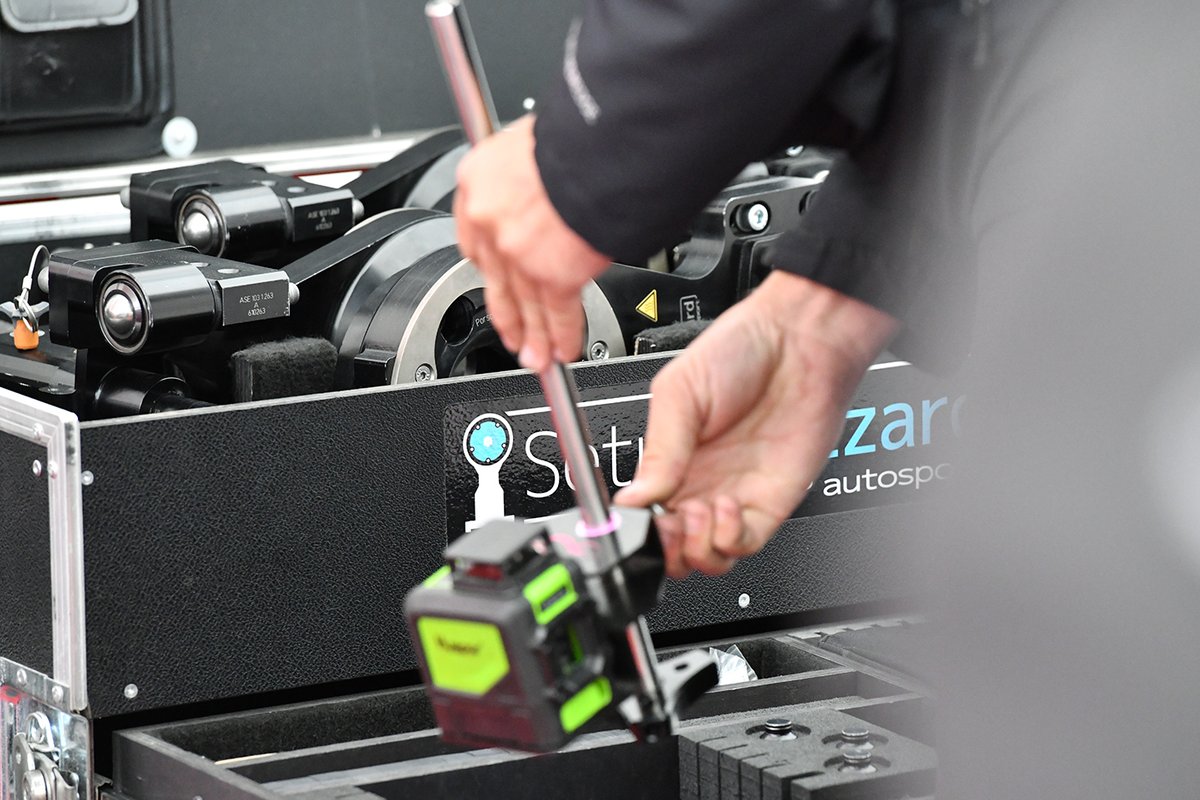 Irishman Hayes first came across it while working for Porsche and “straight away knew what I had on my hands”. Now freelance, he owns the rights to SetupWizzard in the US and has seen a rapid rise in its adoption.

“All I had to do was tell people about it and they got it,” says Hayes, who attends events across the country in a supporting capacity. “You need that baseline to understand what you’re working with.

“You can’t have equipment that’s giving you values which are all over the map, you need a proper performance baseline that makes sense and that you can always refer to. Hardly a race weekend comes along where you’ve got perfect performance, and what helps you really move closer to that is proper set-up equipment.”

"You can see the values changing as you’re working on the car, it’s so much quicker. You don’t have to be running to get a camber gauge and a toe string and tripping over the string" Owen Hayes

A reliable baseline is especially important when a car is in the process of being developed.

“We had a car where we noticed the rear axle toe was moving after each session,” Hayes explains. “It turned out there was a weakness and it was flexing, so it helps you identify clear errors to rectify quickly.”

SetupWizzard comes in three package levels – Easy, Basic and Pro – designed to suit the needs and budgets of different customers. The full Pro kit comes with all the bells and whistles inside the black carry box, including scales that come with an inclinometer for measuring camber and a Bluetooth module that sends live readouts of camber and corner weight values to a tablet. That means engineers can spend less time on their hands and knees once the equipment is set up, which Hayes says takes less than five minutes.

Once up on jacks with the tyres removed, set-up wheels and adjoining stands are bolted onto the wheel hubs. The car is then lowered onto platform scales – Easy and Basic kits come with levelling pads that can be attached to scales – which at the Pro level are aligned using a positioning laser. “It’s just like any architect or engineer would do out in the field,” says Hayes. 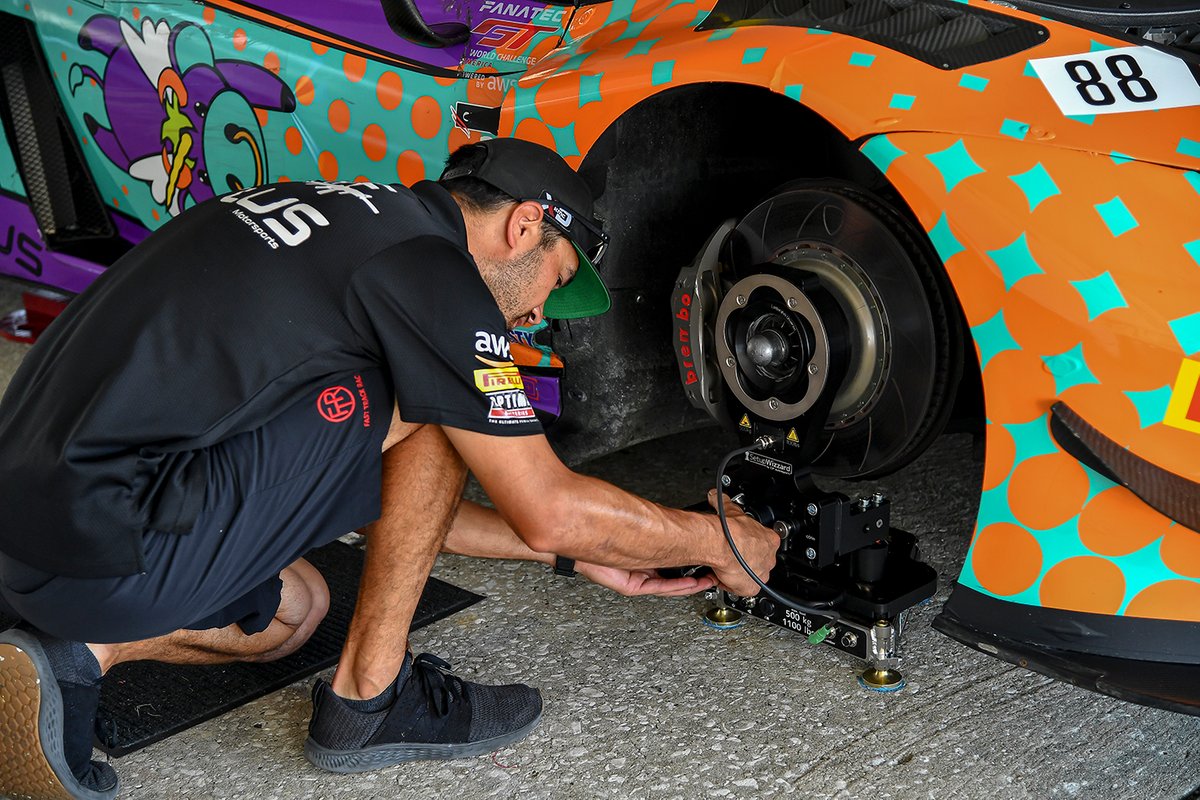 Rideheights are measured by four spring-loaded height gauges that are placed under the car. The set-up wheels are fully adjustable, able to be configured to different track widths as well as heights.

“We have various [camber] shims which go down to 0.5mm resolution,” Hayes says. “You can get the exact same rideheight that you would have operating on hot pressure tyres, or you can adjust the set-up wheels for scrutineering height. The system is extremely tuneable.”

At the secondary Basic level, there is no need for a toe string frame. The package includes toe laser modules that bolt onto the set-up wheels to improve speed and accuracy.

“You can see the values changing as you’re working on the car, it’s so much quicker,” Hayes says. “You don’t have to be running to get a camber gauge and a toe string and tripping over the string.”

Hayes believes the “massive investment per weekend” of any competitor means it is absolutely worthwhile paying for proper set-up equipment.

“It’s such a small investment compared to what you spend over a season,” he says. “You can have the most dominant car in the world, but if it’s not set up properly or you’ve got something completely wrong with the set-up, then you’re going nowhere.”

The grounding of SetupWizzard’s apostle 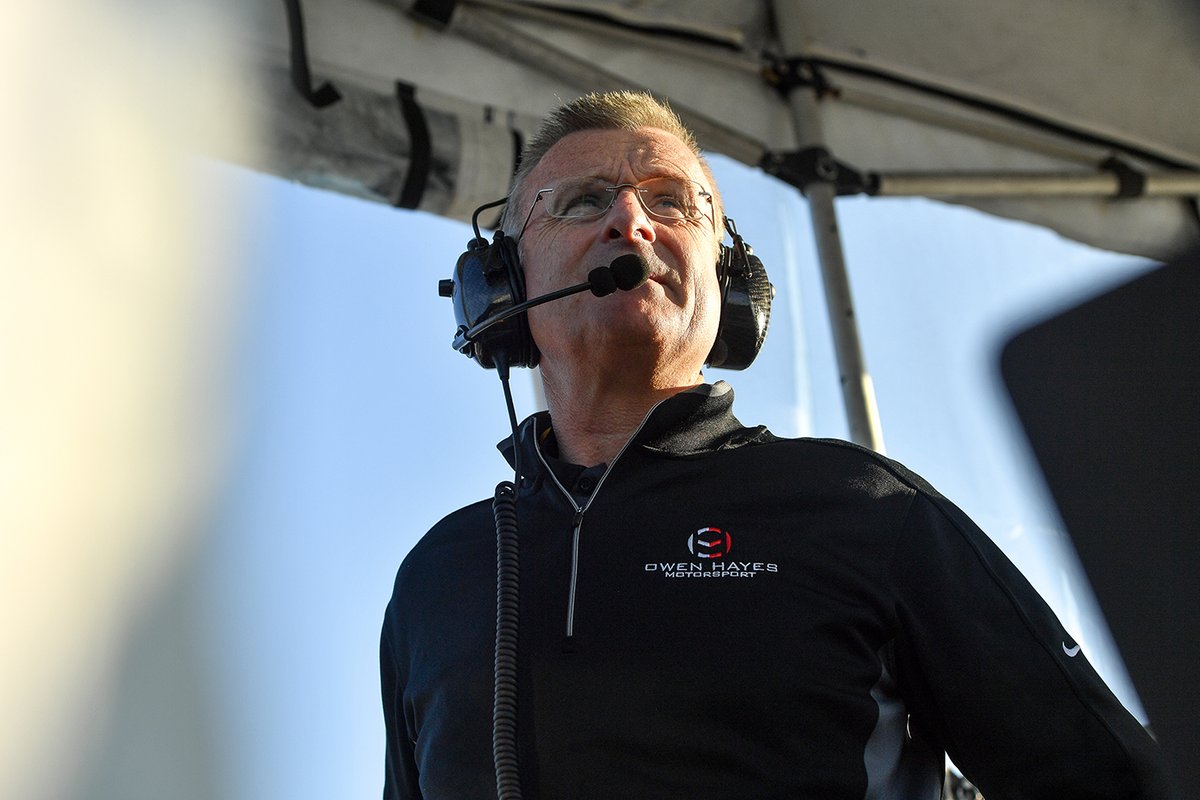 Owen Hayes is well-qualified on the subject of car set-ups, having worked on numerous single-seaters and sportscars in a career spanning three decades.

Starting out as a Formula 3 mechanic in 1987 with Eddie Jordan Racing, Hayes met Edward Turner, who later introduced him to AMG in Germany. He spent summers helping out at DTM rounds, during an automotive engineering degree at Bolton University, and made a dream start to his first race engineering role in the 1996 International Touring Car Championship when Jan Magnussen won first time out at Hockenheim. “It was absolutely incredible, a baptism of fire,” he says.

Following the ITC’s demise, Hayes switched to the FIA GT programme for 1997 and ran Bernd Schneider and Mark Webber close to the 1998 GT1 title. Schneider stormed to pole at Le Mans, but engine problems put both CLK-LMs out early.

“That was devastating, one of the ones that I’ll certainly remember,” he says. “I was absolutely committed with every single cell of my body to the whole project as regards to just wanting that win. The amount of preparation we did was nuts.”

"Everything just perfectly meshed in, it was a magical time, punching above our weight at times" Owen Hayes

A two-decade stint at Porsche began in 1999, initially working on the canned LMP2000 project, before heading up the marque’s junior efforts in Carrera Cup.

He was later assigned to engineer Penske-run RS Spyders in the American Le Mans Series for golden boys Romain Dumas and Timo Bernhard, based out of Penske’s Mooresville campus. They won the LMP2 title in 2007 and in 2008, with an outright victory at the Sebring 12 Hours.

“Everything just perfectly meshed in, it was a magical time, punching above our weight at times,” he says. “We didn’t even realise how good it was until the project came to an end.”

Hayes then assumed the role of Porsche Motorsport North America’s racing director, overseeing the management of customer teams, drivers and the factory IMSA SportsCar Championship programme until going freelance in 2019. 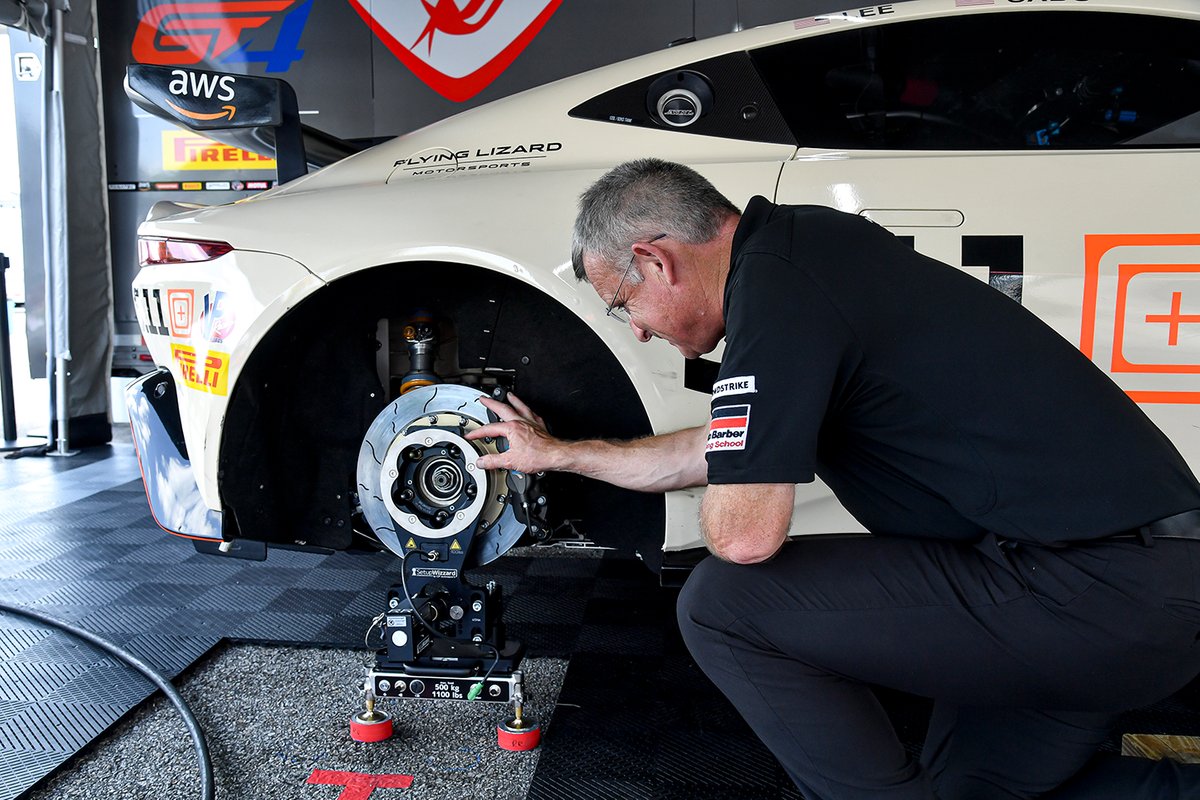