Porsche launches new 935-styled GT car based on the 911

The born-again Porsche 935 mimics the look of the final factory iteration of the Group 5 car - the 1978 version dubbed 'Moby Dick' on its roll-out courtesy of its whale-like looks - and was unveiled at the Rennsport Reunion Porsche festival at Laguna Seca.

The 700bhp machine has all-new carbon-fibre bodywork that makes it longer and wider than the 911 GT RS road car on which it is based.

The car also bears other cues from the German manufacturer's rich racing past.

The LED lights on the rear-wing endplates have been adopted from the 919 Hybrid LMP1 car that won the Le Mans 24 Hours in 2015-17 and the exposed titanium exhaust tailpipes are modelled on those from the 1968 908. 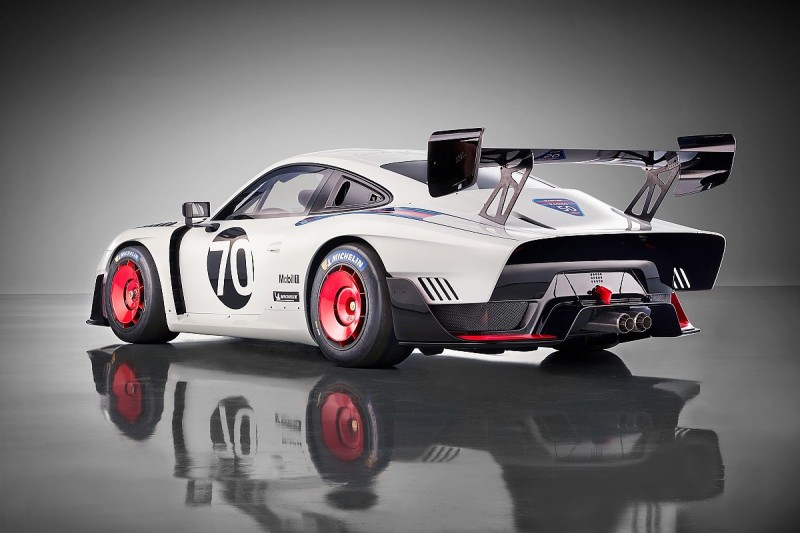 The car was launched in a Martini livery similar to that of the solo 935/78 during its short 1978 programme, which included victory in the Silverstone 6 Hours and eighth place from third on the grid at Le Mans.

Porsche vice-president of motorsport Frank-Steffen Walliser described the car, which has not been developed to a specific set of rules, as a "birthday present" to fans of the marque.

"Because the car isn't homologated, engineers and designers didn't have to follow the usual rules and thus had freedom in the development," he said.

The twin-turbo 3.8-litre flat-six powerplant is largely unchanged from the standard 911 GT2 RS. Just 77 examples of a car that will retail for £625,000 will be built.

The 935 was Porsche's answer to the Group 5 silhouette regulations belatedly introduced for the 1976 World Championship of Makes.

The cars became ever more extreme, culminating in the low-line 1978 machine that had the bottom six inches cut out of the standard 911 chassis.

The 935 concept was also taken up by some of Porsche's customers and the German Kremer team won Le Mans in 1979 with its own ultra-successful K3 version.