A bold outside pass at Turns 1 and 2 of the Grand Prix loop by Frederic Makowiecki on the #4 Black Falcon Mercedes AMG-GT3 of Adam Christodolou set up victory for the #912 Manthey crew of Makowiecki, Patrick Pilet, Richard Lietz and Nick Tandy.

It marks Porsche's 12th Nurburgring win as a manufacturer, and its first since 2011, while the four drivers all became first-time winners of the German endurance classic.

Manthey's #911 car of Kevin Estre, Laurens Vanthoor, Earl Bamber and Romain Dumas had dominated the opening part of the race, while the #912 lost ground in the opening stint with a slow puncture.

But a crash for Dumas after he hit oil at Pflanzgarten with just over 14 hours remaining eliminated the #911 crew and turned the race into a two-way battle between the #912 Porsche and the #4 Black Falcon Mercedes.

The lead changed hands regularly after the arrival of rain in the early hours of the morning, but the pendulum swung in favour of the #4 car, shared by Christodoulou, Dirk Muller, Manuel Metzger and Maro Engel when the #912 served a three-minute penalty for speeding in a slow zone.

However, a lead of five minutes was negated when the race was suspended with three hours to go due to worsening fog, setting up a 90-minute showdown between Makowiecki.

After being passed by Makowiecki, Christodoulou initially fought back and closed up to the back of the Porsche, but began to lose ground as the final stint went on and ended up 26 seconds down at the flag.

An equally exciting battle for third was resolved in favour of the #5 Black Falcon Mercedes of Yelmer Buurman, Thomas Jager, Jan Seyffarth and Luca Stolz.

Buurman looked to have squandered his chance of a podium finish by spinning on the Grand Prix loop at the restart, but he was able to close to pass both team-mate Hubert Haupt in the #6 Black Falcon Mercedes and the #7 Aston Martin Vantage GT3 of Maxime Martin.

The South African driver claimed sixth after a bold outside pass of Frederic Vervisch in the #3 Phoenix Audi after the restart, but was classified two laps down on the leaders.

Dries Vanthoor was less fortunate when he picked up a puncture passing a backmarker and had a major shunt at Tiergarten on Saturday evening, which eliminated the #8 WRT Audi. 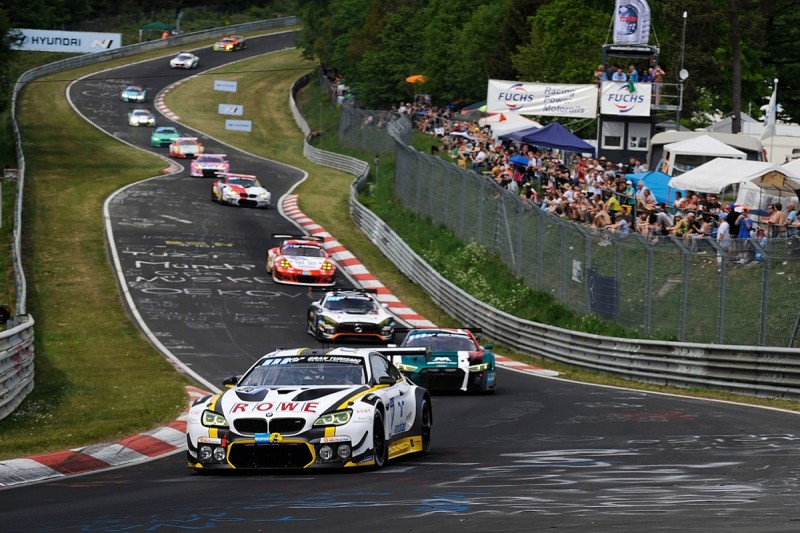 BMW endured a wretched race, with both ROWE Racing M6 GT3s retiring before sunrise - one with a cooling problem and the other with a drive-by-wire issue - while one of the Walkenhorst cars failed to start after a heavy crash for Jordan Tresson in qualifying.

The surviving #102 Walkenhorst car was the marque's best finisher in 13th, four laps down.

Nurburgring 24 Hours running suspended due to heavy rain and fog