Maximilian Buhk claimed the Blancpain Endurance Series title after a frantic fight with Maxime Martin in the closing hour of the Nurburgring season finale.

Buhk, who shared his HTP Motorsport Mercedes with fellow Germans Maxi Gotz and Bernd Schneider, enjoyed the dominant car for much of the race.

But a decision to change brake pads at the final pitstop cost the SLS the lead to the Marc VDS Racing BMW of title rivals Martin, Yelmer Buurman and Bas Leinders.

For 25 minutes Martin resisted everything that Buhk threw at him, but the Mercedes finally squeezed in front in a brave manoeuvre into the Veedol chicane.

Martin never gave up, and was only a few seconds adrift starting the final lap before backing off and claiming second.

Fourth, the last car on the lead lap, was the Esta Motorsport Ferrari of Alessandro Pier Guidi, Matteo Bobbi and Alexander Skryabin.

The race was a disaster for the WRT Audi squad, whose chief title hopes Frank Stippler and Christopher Mies were joined by Rene Rast.

The German trio were lying a strong fourth before needing a brake pad change, and then retired to the pits shortly after a collision with Leclerc's McLaren. Delays for the team's other cars resulted in a best position of 16th.

The best Phoenix Racing Audi was a strong sixth when it too went out of the race with 20 minutes remaining.

Pre-Nurburgring championship leaders Daniel Zampieri, Cesar Ramos and Davide Rigon had a terrible race in their Kessel Racing Ferrari. It started with a drive-through penalty for contact with the Hexis McLaren, before a succession of offs.

The elder Ladygin and Shaitar very nearly wrested the title at the last gasp in their SMP Racing Ferrari.

A host of problems struck their main championship rivals. The Alex Buncombe/Jann Mardenborough/Mark Shulzhitskiy RJN Nissan was vying with the SMP Ferrari for the lead when brake problems sent Mardenborough into the barrier at Turn 1, and subsequent delays cost Buncombe the title.

Instead, it was team-mate Lucas Ordonez who wrapped up the Pro-Am championship, although this car itself was subject to numerous problems, including co-driver Peter Pyzera clattering into the SOFREV Ferrari of Jean-Luc Blanchemain. Nevertheless, a class eighth gave Spaniard Ordonez the crown. 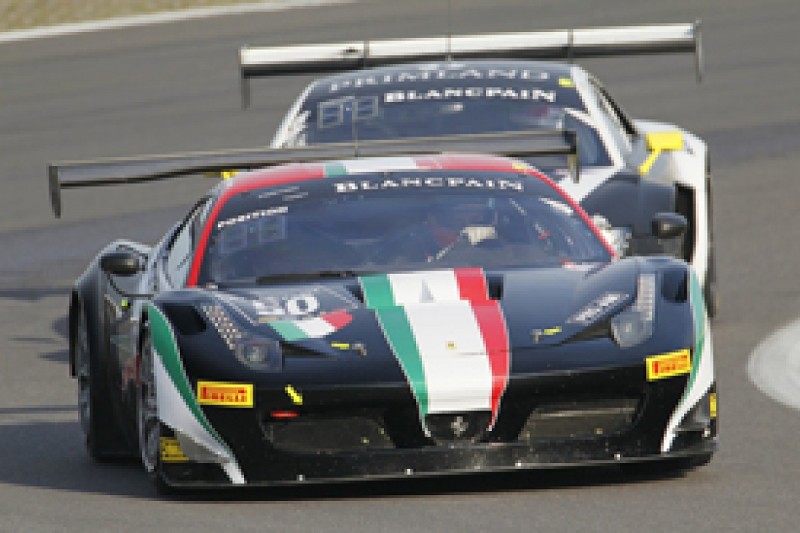 AF Corse Ferrari men Niek Hommerson and Louis Machiels should have been in the Pro-Am box seats, but a massive shunt for co-driver Fabio Babini, when he wandered into the path of the JRM Nissan of Steven Kane, destroyed their chances and the car, although Babini emerged unscathed.

Blanchemain, Jean-Luc Beaubelique and Patrice Goueslard were already Gentlemen Drivers champions before the Nurburgring, which was just as well for them.