© 2020 Autosport.  All rights reserved.
Previous / Estre, Christensen and Lietz to defend Spa 24 Hours win
Next / Button to race in British GT at Silverstone

Team WRT Audi's Dries Vanthoor and Charles Weerts clinched the GT World Challenge Europe Sprint Cup title in the final round of the season at Barcelona.

Vanthoor and Weerts entered the weekend 6.5 points ahead of the Haupt Racing Team Mercedes partnership of Maro Engel and Luca Stolz, with a further 15 crews mathematically in contention for the title.

Among them was the Emil Frey Racing pairing of Albert Costa and Giacomo Altoe, who closed to within 3.5 points after winning two out of three races.

However, Costa and Altoe were stripped of their race two win after a pitstop infringement relegated the Lamborghini duo to 16th place.

Engel and Stolz were also ruled out of the title fight with an identical penalty, having reduced the gap to Vanthoor/Weerts to a mere 2.5 points ahead of the final race.

It was therefore a relatively straightforward exercise for the WRT Audi team, who secured the title with a second-place finish in race three.

The form car of the weekend was undoubtedly the Emil Frey Lamborghini Huracan which enjoyed far superior straightline speed over its rivals.

The opening race was dominated by the Emil Frey Lamborghinis of Costa/Altoe and Riccardo Feller/Mikael Grenier.

The pair locked out the front row of the grid and led either side of the mandatory driver-change pitstop window.

Grenier looked to have had the legs on Costa but allowed his team-mate through to claim the victory which launched the #163 Huracan into title contention.

Costa and Altoe repeated their race one success in Sunday morning's second race but were penalised 35-seconds for a pitstop infringement (the frontal seatbelts were not secured correctly before the car left the pitbox).

Engel and Stolz were also given the same penalty, having finished third in the second race.

This gave the Attempto Racing Audi R8 of Fred Vervisch and Nick Scholl the win, with Weerts and Vanthoor inheriting second. 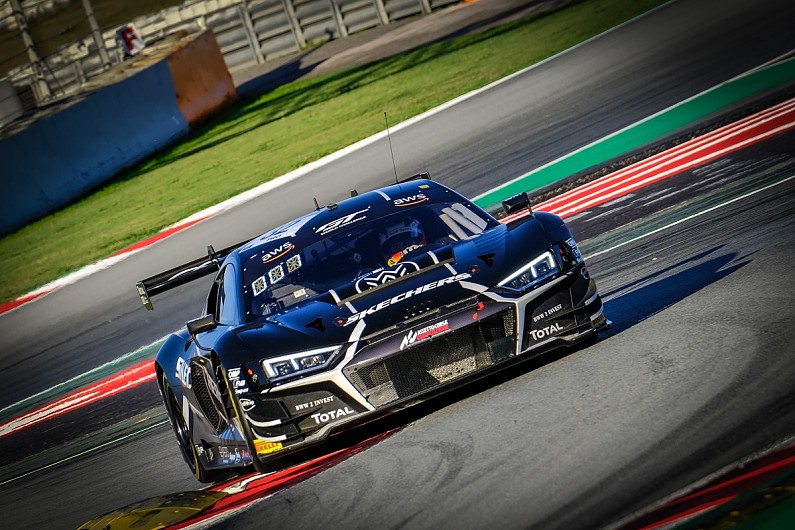 The three crews, WRT Audi, HRT Mercedes and Emil Frey Lamborghini had been split by just 3.5 points before the penalties were awarded.

Ahead of the final race, Vanthoor and Weerts started with an increased lead of 8.5 points over AKKA ASP's Boguslavskiy, the only driver left in contention for the title.

Boguslavskiy's team-mate Marciello started the final race of the season from pole position and was barely challenged en route to victory from Vanthoor and Weerts, despite a late surge from the latter.

Feller and Grenier recorded a well-deserved podium in third following a superb second stint from Feller, which included a pass around the outside of Ryuichiro Tomita at Campsa.

Engel, out of the title fight, had his race ended before the race even got started following an incident with Pro-Am champions Christopher Froggatt and Eddie Cheever.

The Sky Tempesta Racing Ferrari combination of Froggatt and Cheever secured the title in race two, having also suffered dramas in the other two races.

Cheever spun off at Turn 5 in the first race, while the American was also tagged by Grenier's Lamborghini at Turn 10 at the start of race two.

However, a stunning second stint from Froggatt resulted in the British driver snatching the class win on the final lap to bag the title.

The French pairing finished fourth in class behind winners Feller and Grenier, but finished more than 30 points clear of Axcill Jeffries and Ezequiel Perez Companc's Mercedes.